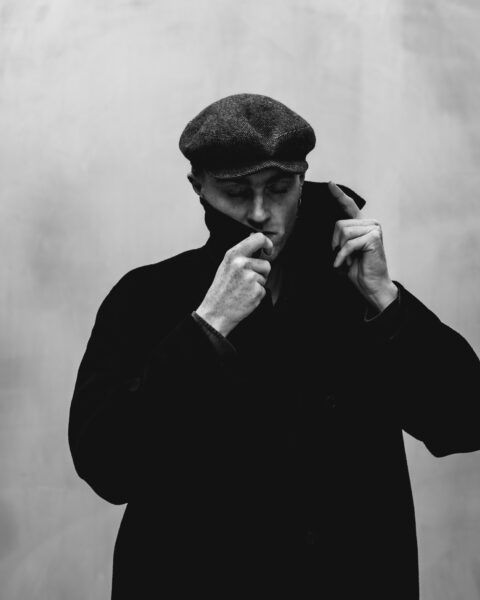 Likely known to So Young readers as Opus Kink’s obstreperous frontman, Angus Rogers’ first  artistic pursuit was in fact poetry and its performance. As a culmination of his work so far, Rogers now arrives with his debut collection, ‘Dog Replica’.

Published by Toothgrinder Press – the brainchild of editor Ned Green (frontman for Legss), and his brother, designer William – ‘Dog Replica’ serves up a macabre and manic kind of blitz poetry. Flinging itself from one passion to the next via a sensuous slurry of images romantic, horrific and decidedly strange.  Rogers’ main concern, above all else, is death, and all mortality’s rich implications.

Obsessed, burdened and enlivened by the ultimate prospect of his own demise, Rogers, still living, spoke to us about his new book, building grassroots communities of poets, and shit.

“Now don’t get me wrong

Just get me a black coffee

Or I will actually kill you”

As someone firmly in the grip of music and poetry scenes in London, how would you compare the experience of the two?

[The poetry scene] is a more natural, more insular thing. It’s usually at the same couple of places. Mine [Blue Shout Poetry] is always at the same place, the Copeland Social in Peckham. There’s a night called Gob Jaw, which is really good -held at Avalon cafe in Bermondsey – and few others dotted around. I guess it’s more of a haven than the music scene is. There’s a lot more of a sense of’‘our thing’ when you’re at these events, which is the key difference. The similarities are there’s some people who move in the same circles. But the difference is there’s some people you wouldn’t meet at shows. It’s kind of a happily insular, safe place to break your own ground, in whatever way, large or small.

Let’s move on to the poems. I’ve noticed they’re mostly about…death? Death is everywhere in these poems, and it can get quite morbid. Is it a thing you’re particularly obsessed with?

Yes. In many ways, for me and lots of other people I know, whether you’re specifically aware of it or not, it is the thing, the prospect of it, the concept of it, and also everything else in relation to it –  the knowledge of it, the fear of it – it’s what makes other things good or vital or important. I was a morbid child and I always had a morbid fascination. I  find that [the poems], even though they come from places of fear, from lingering on death, [they’re] kind of a springboard to how I feel about other things in relation to it;  various gratitudes and obsessions which  are made all the better by the prospect to the end of things or the fragility of things. Not to get too…poetic. 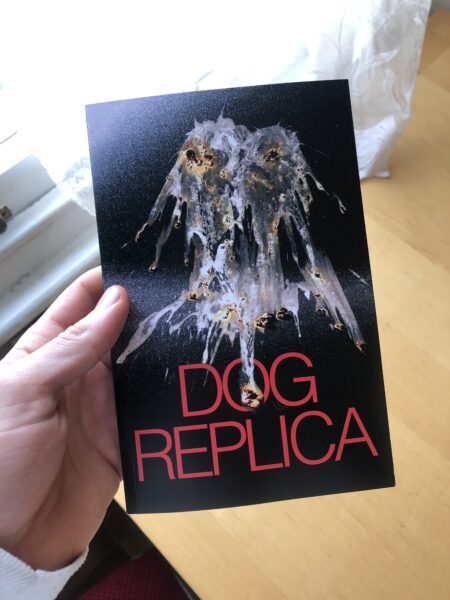 I want to say these poems are full of action. There’s a lot of extreme images coming in quick succession. Reading it, you’re entering this blizzard of very strange scenes. I wonder if this is the taste you have for poetry in general? Or if it relates to how your perform it?

You’re bang on with the performance aspect of it. It’s learning how to present your work in a public space. Being a performer in music as well as writing, is that there is, I feel, a natural necessity to maintain an interest and a forward thrust. But also, it’s the way it comes in the writing of it. I find it difficult to be measured or disciplined when I’m writing. I’ve kind of scatter-brained thoughts coming as they will, and ending up how they are on the page. There’s an editing process to it, of course. A method of spew is how it happens. Then a slight mopping up and neatening of edges afterwards.

I want to talk about the design of the book. You have this thing where you have these old photographs, grotesque Bruegel paintings. Then you have them again, but with bird shit of them. It generates these ideas of defacement, besmirchment. Is there a link between this mood and the kind of effects you’re looking for in your poems?

A lot of the way I’m inclined to present my work, in whatever medium that might be in, there’s a worry that you might be too grand: the worry of pretentiousness. I think the mixture of these old, painterly and grandiose images, being somewhat sullied by the bird shit, by the poems  themselves and the degradation they’re in… It was a happy chain of events that led to that. It’s the way I feel about a lot of the poems. I’m happy with them, but they are shit-smears on the white pages. It makes me think of London as well, omnipresent pigeon shite.

That death is simply the best garnish for life

But isn’t it funny I say clever bastard

That in this knife edge of a world

Among the carcinogens and lily-gatherers

Motherless piping angels with the blinds drawn down

There is enough room for you and I

To spend our thumping glory on love”

Finally, what would you rate higher, artistically?  A debut album for Opus  Kink or a debut poetry collection?

Well we haven’t done a debut album yet so I can’t really say how I feel about them. But they’re ultimately separate things. I’m excited to have my first collection out. Firstly because I’ve done it with my friends, with a lot of creative control, and we’ve done it outside the usual frame of how these things get published. It’s the same way as the poetry night: creating your own space if you don’t feel the space exists for you or others around you. The DIY thing is eternally pleasing.

Writing came first, before music for me, so this feels like a culmination, and the way it’s happened is very satisfying. But I imagine a debut album… there’s more of a circus, there’s more people involved, you’d go out and tour it… But I couldn’t say. They’re wholly separate and I couldn’t compare them.

‘Dog Replica’ by Angus Rogers is published by Toothgrinder Press.