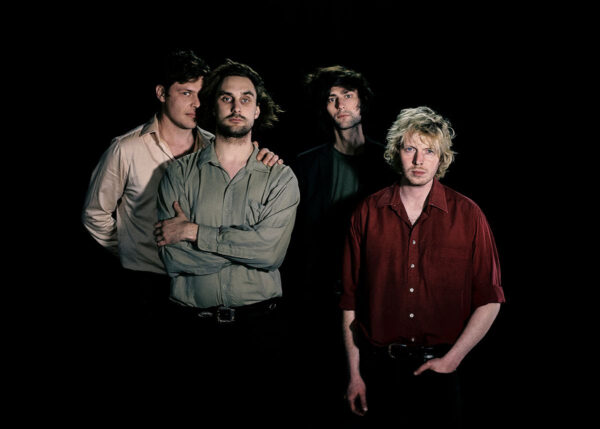 Arriving from the little island below Australia called Tasmania, A. Swayze & The Ghosts have risen from the stricken pubs and venues that fill the capital of Hobart and made quite the noise.

The group have made such a ruckus in fact that Rough Trade have welcomed them in with open arms on the spot, releasing their debut 12″ single ‘Suddenly’ and bringing them over to the UK for the first time to play The Great Escape this May. Already striding away from the tumultuous setting of their upbringing as a band, their music will never allow them to venture too far away – it’s determined lyricism and unruly balance of raucousness and pertinent melody always reminding them what made them want to get away from it all in the first place.

Written from the perspective of Andrew Swayze’s wife Olivia, who together wrote the song, ‘Suddenly’ is a exploration into repression and gender inequality that is commanding, unequivocal and unafraid to be threatening, exuding years of restraint into a convincing 3-minute pop song. Providing an immediate and incessant sound from the outset, sparking guitars relish under the rich production, exploring the already spritely atmosphere around Swayze’s bouncing yelp, unconstrained and punching. Swayze writhes as he murmurs “you told me to stay / but I wanted to go” in harmonic unison, the voices simmering with liberation, bold and unblinking in their seriousness.

‘Suddenly’ is an instant and incendiary introduction to a tempestuous and perhaps essential new group.