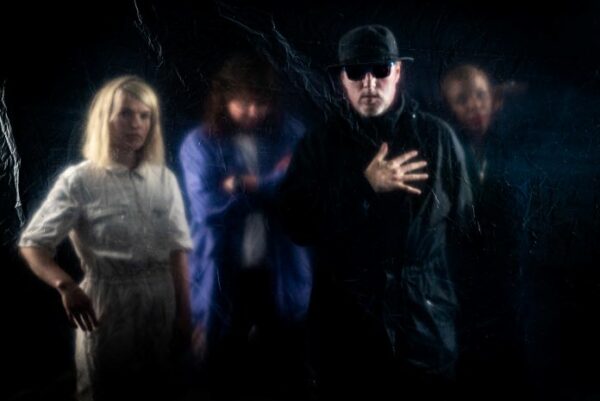 Acid Klaus have released their debut sleaze-electro single, ‘Party Sized Away Day’ along with a head spinning video. Beat-maker master, Adrian Flanagan is accompanied by Maria Uzor of Sink Ya Teeth. It’s threatening chamber electro at its best with a detached monologue courtesy of Maria.

Released on Zen FC (Yard Act’s new homegrown label) with Ross Orton (Working Men’s Club, Amyl and the Sniffers) on production, it marks a new chapter for Adrian Flanagan (International Teachers of Pop, Moonlandingz, Eccentronic Research Council). It’s not shedding too much of his past musical identity though; the groove addict hasn’t dropped his habit. The accompanying video features the duo – Maria and Adrian – swaggering around a Sheffield housing block while a surreal 360 degree camera warps Maria and Adrian’s forms and the surrounding space.

Rib-rattling sub-bass opens the track alongside off-colour synthesisers. As it builds Maria’s vocals enter with an off-beat monologue, musing on public transport. The call and response between Maria and stabbing synths make for a relentless grooving rhythm.

It harks back to that particularly nostalgic darkwave sound, a bit retro, the sort of music for dark, loud spaces with powerful sound equipment. Maria’s monologue creates the great atmosphere, and the track occupies a much gloomier space than Sink Ya Teeth usually do. It’s showing off the real power of collaborations and the atmosphere for freshness it can create.

Electronic breakbeats snap and crack alongside the swelling bass, layered up with more cutting synths, slicing through the sub. At it’s core it’s a leftfield dirty dancefloor filler and the forceful syncopation makes it impossible not to move. It’s best heard loud as the solid, seedy, dance-pop gold that it is.