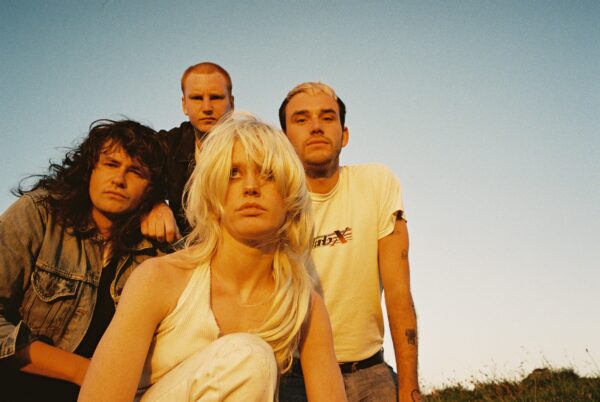 Aussie thrill-seekers Amyl and the Sniffers share ‘Guided By Angels’, the first single off of their forthcoming third studio album ‘Comfort to Me’, out September 10th via Rough Trade Records.

Energy, by definition, can be described as “the habit of vigorous activity”, with vigour acting as the key characteristic called into question. With all the knowledge in the world and not enough time to utilise it properly, as a society, we’re often too quick to try and subdue youthful animation – pass it off as potentially problematic or, a trait which must be tamed. But what do we do when such liberated force continues well into adulthood? Or even better still, when you find your fellow Oi! enthusiasts and start a band built out of mutual restlessness, and a voice of a generation begging to escape its confines? It’s with such zealous delight, we’re welcomed back, with hench arms, into the mightily hectic world of Amyl and the Sniffers.

Bruising eardrums since their 2018 debut ‘Big Attractions and Giddy Up’, in ‘Guided by Angels’, the Melbourne based four-piece have self-developed all the searing stamina of their previous releases, and amplified the strident uproar to infinite amounts. In just short of three-minutes, lead howler Amy Taylor and her authentically likeable motley-crew remind us why we fell in love with their chaos in the first place. Rammed full of furious instrumentation, thrashing narrative’s, and anthemic comprehensibility, ‘Guided by Angels’ is as much the clunky, irremovable stain of sweat stained mascara as it is a glamorously messy joyride; or perhaps even a healthy combination of the two. With Amyl, there’s very rarely an in-between.

Amyl and The Sniffers may not change the face of ‘Rock n Roll’ entirely, but there’s an undeniable charm to their signature spew of revelling raucous; one of which you can’t help but mind, body, and shaken-soul invest in. For all life’s worth, when push comes to shove, and you’re faced with no option but to roar out the passenger window of a car skirting down the freeway just to feel something, a brush of off-kilter faith from four Aussies posturing as the good and miseries worst enemy will never result in a wrong turn.

Defiantly individual and breath-takingly discordant, as far as contemporary role-models go, Amy Taylor, in all her strength, sweat and elated spirit, is a leading figure in uncontested self-acceptance and glorious anarchic sensitivity.

There’s absolutely no question that ‘Guided by Angels’ is an addictive little taster of what’s to come. If you’ve got the winning formula, you may as well stick with it. In the words of Amyl and The Sniffers themselves: “Energy. Fuck.”