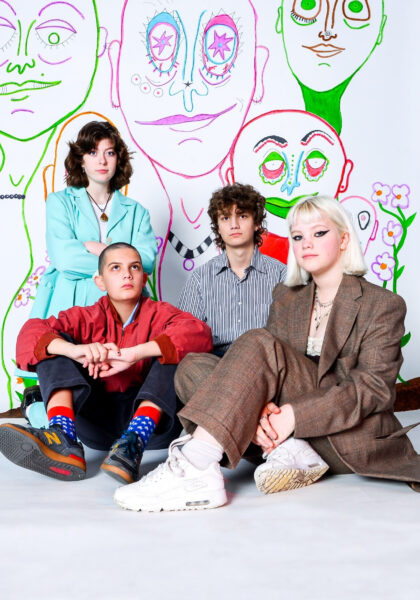 Since the dawn of ‘coming-of-age’, humanity has had a  fascination with growing-up. We indulge in it, allow it to fill our heads with rumours of greater, more pertinent things to come and then bang, the band’s been snapped and Ferris Bueller’s left wondering how time flies when societal constructions and wasted-youth don’t even have wings.

A mere blip in the haphazardly elongated circle of life, youth’s become a paralysed lullaby; an excuse to spend our days dreaming of restraint-free adulthood, whilst the wake-up-call clocks of time tick quietly along to the rhythm of ageless angst. The unpredictability of life is the most wearable charm in all the collection and yet still, we’re obsessed with the notion of embellishing the present from a whole other creation tale entirely.

Confirming you don’t need an existential mid-twenties crisis to successfully write from the heart, Colchester’s Anorak Patch, the latest addition to the ‘Nice Swan Introduces’ series, are set to flip establishments on their head with their new single ‘Irate’.

Whilst a bunch of high-schoolers might not be the first thing that springs to mind when asked how responsively the seminal lovechild of Queens of the Stone Age and 2020 might howl, Anorak Patch are unquestionably an alternative godsend and ‘Irate’ in all its frenzied self-reflection, is an entirely re-configured beast altogether.

A paper-trail-less anthem of rattled bones and contemporary mind games, ‘Irate’ perfectly captures our presently stagnant frame of existence as the “paralysing times we are in now” meet hopes for the future in manners that carry untimely significance, when penned by a band who’re both playing and dealing the cards the universe has brought to the forefront.

Gone is the routine safety of doing things the way you used to do. We’re all trying to keep one eye on the path ahead whilst somewhere to the left, societal fingernails are scratching the great big chalkboard of mapped-existence and day-to-day renewal. If the thing you rely on most to get you through the internalised lockdown of solitary mundanity is somewhere far off in the clouds, then ‘Irate’ might be the grounding we all need.

“Sometimes you will never know the value of a moment until it becomes a memory” says Dr. Seuss, if ever there were a motive to capture instant significance, it would be right here and right now with Anorak Patch.