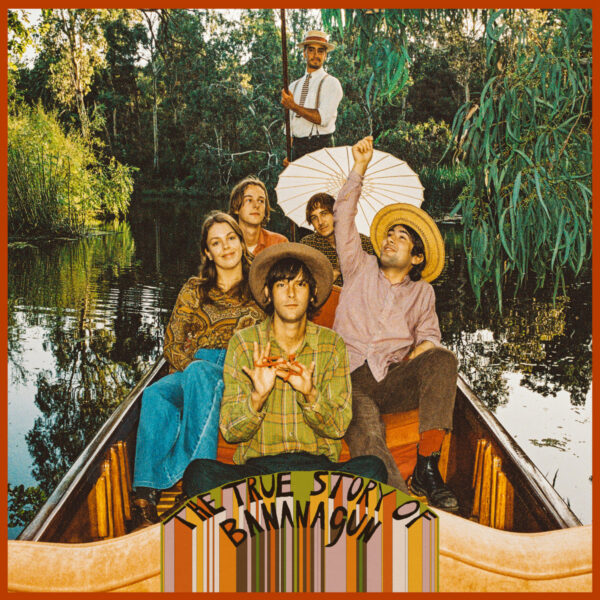 It’s been six decades since the Rainbow Renaissance first took to planet earth in light of a re-awakening, yet their enlightened ethos remains a force to be reckoned with. Reinventing capsuled-time, and transporting such to a 21st Century proto-pot of germinated-groove is no straightforward dig; but as long there’s a flute to be played and history to be made, we’re ready.

‘The Chariot Cosmic Couture’ of ‘The Fools’ Barry and Yosha Finch may have brought everyday wizard apparel to the 70’s hip, but on their debut LP: ‘The True Story Of Bananagun’, Melbourne’s Bananagun percussively crochet pockets of contemporary innovation, whilst at all times addressing their cult-status third eye, on how best to spellbind sentimentally, during this year of aimless drift.

In a world slowly fading back into black and white, ‘The True Story Of Bananagun’ is a space for evolution; a captivated environment in which bell-bottoms chime literally, and genres are but a social construct built constructively, to be re-designed by five pals and a fisheye lens. Packing punch to help mix pre-existing reverberance with their own technicolour psych-pallets, Bananagun have mindfully managed to paint  interstellar highways directly towards our hearts.

Fevered, fervid and flawlessly fervent, every track on this record charms like a new addition to your spirits freckle collection. ‘Freak Machine’, is so blaringly alluring and nostalgically traversed, that it flicks with more precision than a vintage handbook to applying the perfect cat eye; proving that kitsch, can have a whole new saxophonic identity when paired with recreational feel-good.

The same way a lizard is drawn to organic dazzle, eternally leaning towards the sky so as to catch a kiss from mother nature’s favoured celestial being, ‘Freak Machine’’s instrumental-soul-strings throw little loops of infinite delight into the cosmos and masterfully, watch them burst into splendour. When the heat of an ‘arvo in June becomes so vibrant you can hear the warmth of its joyous breath, you know that Nick van Bakel and his band of merry tropicalia have truly come alive.

When “Trying to take in the world around you and appreciating the here and now”, imagine curling into bed at night in your new banana-leaf printed sheets, only for those silk pillow cases you cradle so dearly to start whispering societal-soothing’s back at you. “Caterpillar shed your skin and reveal a butterfly again”, ‘She Now’ beckons, calling out to the self-expression subculture buried within the belly of all human beings.

Blaring the soared funk of ‘A Minha Menina’ (both Os Mutantes’ and, The Bees rendition are applicable here) via ‘turn on, tune in, drop out’, as much as Bananagun timelessly trip-out, they too seek to use their platform to accentuate social significances and ‘She Now’, refuses to play subtle.

Throw your arms in the air and tickle the jungle as it rises and shines, here we pause for a jittery interlude. Bird Up!

A painted face within a portrait of multi-instrumental splattering, enticingly fuzzy like a spongy sunflower with hook-fluttering eyelashes longer than the fringes of Bananagun’s meticulously fitted, overcoat of kaleidoscopic proportions, Mushroom Bomb is a seismic statement piece for this generation’s ‘Carnabetian Army’, of congas, cowbell and awakened eccentricity. Whilst “The Master is about learning to be your own master and resisting the urge to compare yourself to others”, Mushroom Bomb is a lysergic seedling destined to bring people together in an act of collective empowerment.

Nothing. No mind nor soul, creature nor critter on the surface no- face, of this entire solar system, is anywhere near as perfect as ‘The True Story Of Bananagun’. An immediate contender for ‘Album Of The Year’, there really is everything special about Bananagun.