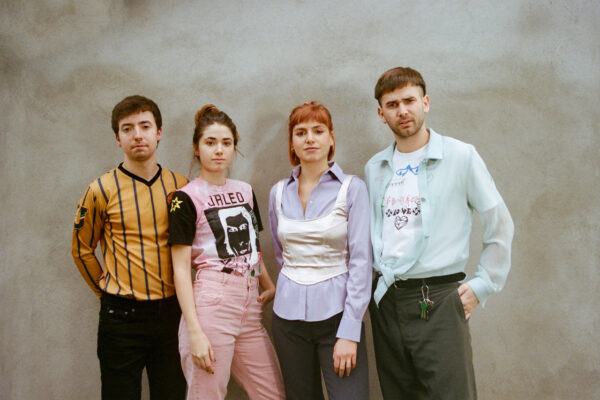 Spain has been home to a vibrant punk scene in recent years with the likes of Hinds and The Parrots leading the way. Belako are the next wave in this scene.

The Basque Country post-punkers new single, ‘The Craft’, is a raucous tribute to the 90s classic cult film of the same name. Full of brutal distortion and relentless energy, Belako have created something as restless as it is refined. Singer Lore Nekane Billelabeitia’s elegant vocals cut through the fuzzy guitars and thunderous drums to create an uneasy clarity, as if bringing home some uncomfortable but necessary home truths.

“‘The Craft’ pays homage to our teenage love of the 90’s movie by the same name,” explain the band. “It also feels like the here and now, and it’s now or never. A sorority spell to face adversity head on, and to take fragility as a vital force in new ways to build ourselves up.”

Belako have been building their formidable reputation in Spain through a relentless touring schedule that had, up until recently, begun to spread into the rest of Europe. Having supported the likes of DMA’s, Queens of the Stone Age and Liam Gallagher in the past year, Belako had been growing an already solid well of support in preparation for the release of their first album since signing a major international record deal. Due for release on 8th May via BMG, ‘Plastic Drama’ is an extension of the ideas explored in ‘The Craft’, finding meaning in a world growing ever colder and more disparate.

Speaking on the album in more detail, the band say that Plastic Drama is about “the search for the real meaning of things in a world that translates everything into assembly lines, manufacturing and the exploitation of living things. It’s about the harsh reality our generation is facing and the only good use of technology, which is the ability to spread the work and call for action.”

With an extensive touring schedule that has been justifiably called off by the coronavirus pandemic, including shows at SXSW and The Great Escape, Belako are itching to get back on the road. With their Reading & Leeds Main Stage shows still going ahead and their album out next month, 2020 could be the year everyone takes notice of Belako.