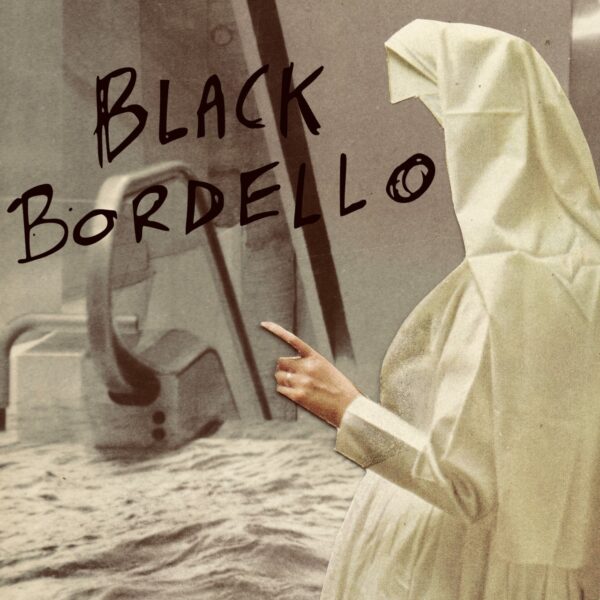 In the aftermath of PJ Harvey’s ‘Stories From The City, Stories From The Sea’, deep beneath the seedy buzz of inner-city subway stations and Cirque-de-societal-surge, the prog-dreamers have awoken.

Instantly bursting into flame and engulfing breath in its path, Black Bordello’s self-titled debut burns stronger than a full moon’s candlelight Midsommar. Beaming towards the midst of an experimental no-man’s-land, their organic elixir of raw beauty crushes rock from alternative stained-glass into gothic-sand so pure that were you to dance barefoot upon its foundations, the soles of your feet would remain blazoned yet untarnished.

A rebellious spark igniting from the undergrounds of this scene-amassing ashtray we call ‘defined-genre’, if the haunted chandelier of Phantom Of The Opera were to take a full 360 turn on itself and through such, initiate a self-released string procession from the high-heavens down to the orchestra pit below, expectations would turn on their heads and Black Bordello would be ready in the wings to take the final bow.

“When the evening is spread out against the sky” ‘Prufrock’ draws closed the curtains on another day of drab, and welcomes the night of the living musical. Piling on layers of nature’s lip-tint in the deepest shade of Vaudeville, glossily staining the cheeks of its beholder and taking pleasures in observing how in the presence of a maestro, blushes turn from crimson to a celestial scatted hue; vocalist Sienna Bordello may have been too rogue for her jazz contemporaries, yet it is in the heartland of her own making the London based starlet truly proses proof of divinity.

‘Butterfly Stitches’ despair on the haunted shoulders of the Lionheart dreamers. A left-field lullaby calling out from within a field of bass-blossoming burgeon, hear how the ‘red roses’ weep into their plush cushioning and bloom a labyrinth of thorny sax creation and lyrical desire. Seductively climbing down into the wailing streets of ‘Vienna’, this is a collection of tales to be spun at precisely its own calibre.

It takes very little persuasion to fall under Black Bordello’s spell, but when the chime strikes on the hour and the Leeches are let loose, let it be known there’s no chance of turning back.