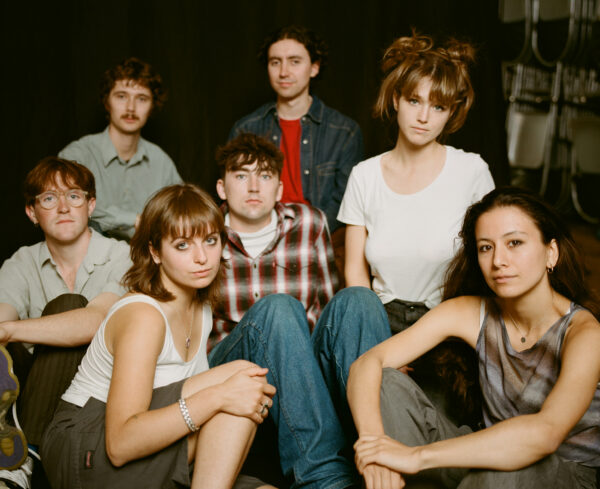 Following on from the acclaim of their debut album ‘For The First Time’, Black Country, New Road announce news of their sophomore record: ‘Ants From Up There’ (out Feb 4th via Ninja Tune) alongside the new single ‘Chaos Space Marine’.

Picture this. The setting is by a marina, you’re at an art-house-ball and all hell has broken loose. Think aggressively well-ornamented gowns, items from a gourmet feast are being hurled in every direction (perhaps the king has been hit by a lobster and / or a giant wedding cake) and at some point, towards the second verse, someone begins to chat shit about their “honest thoughts of the sea”.

Whatever the imagery- there’s cinematic destruction, and then there’s turning on all the lights, waxing nonsensical from the top of your lungs whilst tearing through the lining of a plushy red-velvet armchair and calling the entire escapade ‘Chaos Space Marine’.

Meticulously narrative like seven protagonist masterminds of orchestrated carnage, this barrage loving septet will seemingly stop at nothing in order to achieve experimental grandeur. Falling somewhere between the ranks of addictive, unlistenable and timeless, ‘Chaos Space Marine’, much like its predecessors, is a skilfully curated smorgasbord of finely-cured mundanity.

Progressively improbable yet strangely familiar, ‘Chaos Space Marine’ is another step in the unilinear as Black Country, New Road, for better or for global-domination, refuse to take a step back.