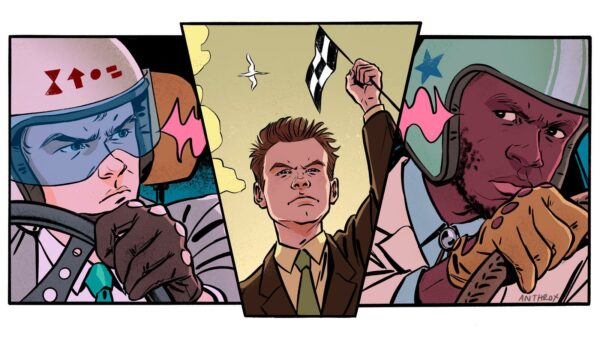 It’s been two years since Black Midi released their debut ‘Schlagenheim’ and whilst the escapade has taken an untimely backseat, it’s to no audio-discretion that whilst we may have thought we were pretty in-tune with the sound of festered-discord cascading down our spines…we were wrong.

Sharing news of their sophomore offering ‘Cavalcade’ (out May 28th via Rough Trade Records), black midi return with lead single ‘John L’; a contemporary cult affair which drones like a hyper-hybrid mosquito trying to navigate the radical black-mass of a Barry Godber painting.

Where krauted-maverick meets the third-eye in a series of Morgan Simpson insight, ‘John L’, despite being a single trawl in a wider-net of baited breath, is a feral catch that’s not only matched, but distinctly exemplified when paired with visual accompaniment.

Directed by Nina McNeely (known for Rihanna’s “Sledgehammer”), ‘John L’s’ video is left to live-freely like the absurdist lovechild of The Claypool Delirium and Dr. Seuss’: ‘The Lorax’, on crack; an anarchic affair which utilises the addition of Jerskin Fendrix on violin to the nihilistic-nth degree and employs excruciatingly choreographed “jet black comedy”, as though it were child’s play.

Rattling psyche’s and promoting ungodly ideals like a soul-tight pair of low-rise jeans, this, is the making of a progressive holy matrimony and Black Midi, are the new-age amalgamation of a promised future still to come.