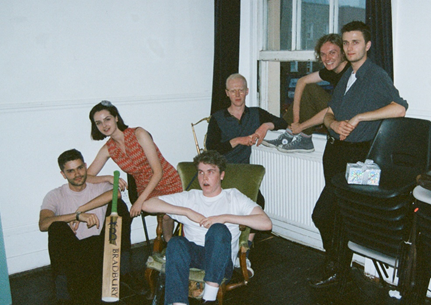 South London’s Blue Bendy have been slogging it out at venues such as The Five Bells, New Cross and The Windmill, Brixton for the last 12 months or so.

Despite temptation to act on a thriving scene, the band have intentionally not released any music online as they hone their craft. Today Blue Bendy have put their brave foot forward and released their debut single ‘Closing Sound’ via one of London’s most important label’s, Permanent Creeps. Sat upon a bed of acoustic guitars, rough drums and bent electronics, Blue Bendy are frankly showing off in this pop vocal display. Sad boy crooning that you could liken to Morrissey or Ought’s, Tim Darcy twisted with the soft french female vocal which adds a dynamic unheard from their peers. It’s well thought, romantic yet glum.

‘Closing Sound’ is one of the most complete debut singles you’ll ever hear and if there’s more like this to follow, i’d be very excited. Listen below.

We’ve added ‘Closing Sound’ to the So Young List on Spotify. Find it here.