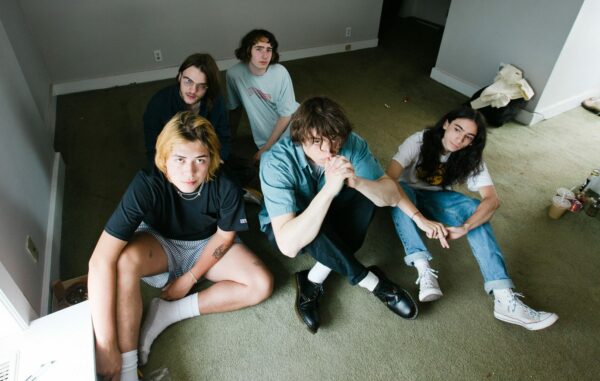 In ‘Nausea’, the French philosopher Jean-Paul Sartre declared that “for the most banal even to become an adventure, you must (and this is enough) begin to recount it.”

Despite being caught in a cyclical era of very little to do, and as a result, even less to declare, it goes without saying that this is a generation who relish in communally communicative exploration, and of whom aren’t all as jaded as the universe wishes us to believe.

Perhaps there really is no better time then, than now, to take note of newcomers Geese, the latest signings to Partisan Records//Play It Again Sam. ‘Disco’, the Brooklyn based teenager’s label debut, is the result of a band who were handed the golden-ticket opportunity of creative re-birth before barely having left the womb in the first place.

In just over six minutes, ‘Disco’ thwarts all expectations before you’re even given the opportunity to form any. Calling upon a motley crew of alt-genres, Geese embody the sensorial soar of early Pink Floyd, the unvarnished cool-drool of Iceage’s Elias Bender-Rønnenfelt and elated howl of contemporary rock; all, whilst channelling what shall now be noted as the three intrinsic stages to anthemic longevity.

As was the case for Sartre, the experience is only ever good as the process that speaks for itself. In ‘Disco’, this raucous- raconteur involves a pluckily pulsating first half which, when followed by an almost unnerving, joyously jangled interlude, clears the sinuses of ‘guitar-music’ cynicism and braces the soul for whatever’s next to follow. It’s at this stage that Geese flip themselves upside down, and reveal their soon to be trademark, Cheshire cat style mischief.

Penultimately, or, as is the case here most significantly, the third part to this tumultuous ‘Disco’ saga is pure, unadulterated chaos; an instrumental love-affair which results in a uniquely discordant outro that prances between the lines of what’s traditionally good, and that of which is delightfully Kraut-y and borderline-unbearable to listen to.

In this day and age, for a band to emerge un-assuming and gloriously unannounced, is a near miracle in itself. Geese, no matter what happens next, are undoubtedly going far.