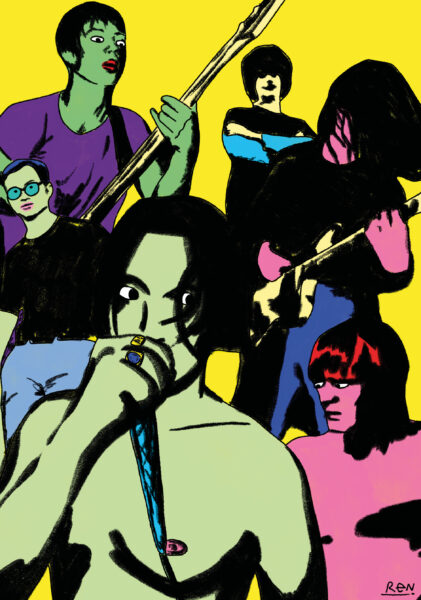 The below interview is taken from Issue Thirty-Six of So Young.

It’s not often we are able to witness a renaissance in motion. Typically we rely on hindsight and historical analysis to understand the discourse that led to such a breakthrough. We are therefore both blessed and humbled to understand we are in the midst of a global post-punk revival, one that is frothing with untapped talent. Holding the flag for New York is Catcher, a transgressive collective of musicians that have harnessed the stark bite of no wave and combined it with the shapeshifting eloquence of The Fall, creating a vast untamed sound and bedding a nascent legacy in their wake.

Their tectonic, swelling arrangements are a tableau of their live shows. Brimming with uncompromising energy and earnest lyricism, Catcher lean into chaos as a conductor. The unyielding six-piece are blazing the trail for their contemporaries and have garnered a sizeable hype around their urgent shows, with vocalist Austin Eichler commandeering the prodigious vessel.

After the heaping success of their two double singles ‘Yesterday’s Favorite’ b/w ‘The Skin’ and ‘Only Advice’ b/w ‘Fallen Stones’, Catcher have been taking their swelling performances on the road, (most recently with NYC’s Been Stellar) before finally landing back in New York to finalise their debut record ‘The Fat of A Broken Heart’.

From the humble basement of their Brooklyn digs, Catcher reside and record their incendiary and stirring post-punk, fuelled partly by the 24/7 intensity of the city itself, and partly by an expansive absence of the music they themselves wanted to see on stage.

Where are you guys at the moment?

Austin: We’re in our demo studio in Brooklyn.

So thanks so much for tuning in across the Atlantic

A: Thanks for sitting down with us.

You guys have been touring pretty hard recently. How have you been finding that?

A: The tour was great. With us being a relatively new band it allowed the newer members to come together and really figure things out. We became a band, so that was great.

So the tour was learning how to play on stage as a band? I guess that was like a steep learning curve.

A: Yeah it was. I think it was more because we had just met the newer members of the group.

Wilson: Our fourth show ever was our tour send-off show. Austin and I had been on stage a lot before, but we had some members of the band where it was their first time playing on stage. So after just playing four shows total then for our next tour, we played 20 shows in a row, it definitely helped us figure out how we work together on stage.

A: It was better than we could have ever imagined. Playing it live for the first few shows, we were pretty surprised at the reception, especially in New York. Because we had just moved here during COVID, and we didn’t know anyone or anything. So by the time the shows were happening, everything happened very quickly. We started playing, and then people started to hear about us and rooms filled up. And we were like, ‘Oh, what the fuck?’. 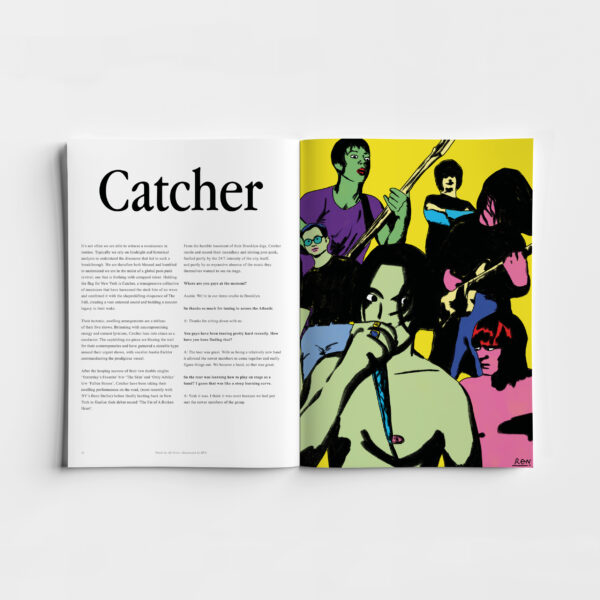 For sure. We’ve felt a very natural hype built around you guys, and it’s nice to see organic growth. With all that, when did you take time to put this whole record together?

W: It was right after the tour. We had [already recorded] nine songs of the 10 that we’d been playing on tour. And it was right when we got back, we got in this studio for a week and a half and just knocked it all out. Right there.

And it’s all produced by yourselves. Do you think that will be something that you keep doing as a band? Or do you think you’ll ever explore bringing someone else in?

A: We’ve been thinking about this more recently. And I think we would love to work with someone and collaborate. But we have been thinking a lot more about production ourselves. Because this record was recorded live, and I punched in vocals on top of it. So we didn’t really get a lot of time to experiment with space and production. And that’s something we want to do on the next stuff that we’re writing right now. But yeah, if we have a budget, and we can work with a producer that’d be cool.

W: We did that on the first record intentionally; just live takes with everyone playing at the same time, and not so much production as we wanted it to sound and feel like our live performance. Then we thought we can be more adventurous and maybe a little more grandiose with future records and actually go to a real studio.

I’m aware a lot of bands in the UK do the circuit for two or three years before actually putting out a record. What inspired you to put the record out quite soon after your inception?

A: I wouldn’t like to speak for everyone, but I think I personally just wanted to make the music that I would like to hear, and we felt like that was happening.

W: Putting it out so quickly was kind of a disadvantage. We already finished that record in October or something last year. So we already have new material to try to work into the live shows. We didn’t want to have to wait like a year to put this record out and then be in a creative backlog going into the future. It’s got to keep moving.

The self-starter attitude is admirable. Do you still resonate with the music you’ve already put out?

A: I think that stuff is still pretty important. Because on this record, a lot had to do with things that we were experiencing in our everyday life more than outward influences. So we worked with elderly people with dementia and there were dark themes that made their way into what I was reading and what I was watching.

‘Yesterday’s Favorite’ was the track that talks about you working with people with dementia. Will there be more anecdotal references from your lives on the album?

Do you want to tell me what the narrative behind the new record ‘The Fat of A Broken Heart’ is?

A: There’s a lot of stuff that deals with like the body as an overarching theme

W: I think it’s along the same vein because we were working with this really old dude who was frankly in a state of decay, right? That worked its way into everything way more than we had realised until later when we had a lot of the songs more complete.

When can your UK fans catch you live?

A: We’re trying for this summer. We’re gonna see what we can do. It’s a finance thing.