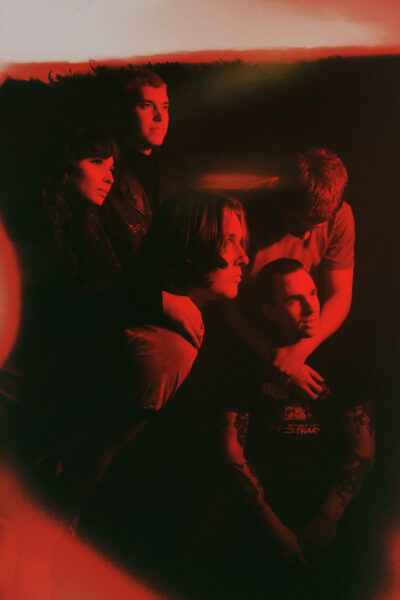 London based punk quintet Chubby and the Gang, share ‘Lightning Don’t Strike Twice’ off of their forthcoming double A-side out May 28th, via Partisan Records.

When attempting to evade a short-circuit in a system that sets a soul up for impedance, the concept of lightning striking twice is an extraordinarily underwhelming phenomenon in comparison to escaping systematic shock.

Tackling injustice head-on in a charge of indicated fury, ‘Lightning Don’t Strike Twice’ is a bluesy-barrage of debauched raucous which cuts through the noise like a double-edged sword semi-blunted by experience, and dipped in wholly unfavourable prospects.

This is the ‘Rock ‘n’ Roll’ The Kids were clattering on about – the dark corner of the dance floor where folk are left to their own demise and socially-static discharge, seeps out the walls and into the palms of every corporate-crook and cranny. “Money don’t buy everything it’s true” yet inequality remains an untameable game of cat and mouse with the blindfold pulled tightly across the many by the few.

Combining elemental ferociousness with a rumbled core, lest we forget the 30-30 rule of lightning; wherever, and whenever, the bolt may strike a chord, wait thirty seconds for thunder to roar before going indoors and witnessing a Chubby and the Gang style rampage across the beaten path.