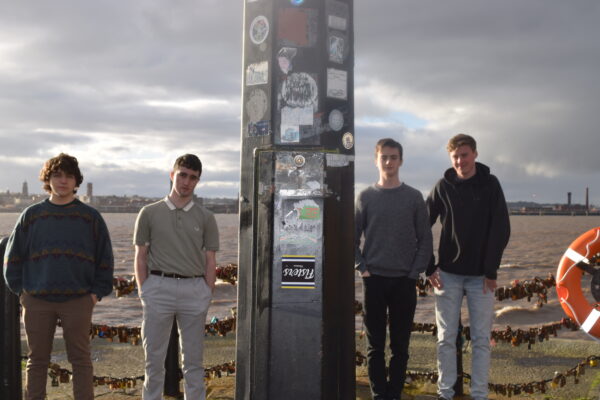 When the heads at Nice Swan Records and the bods at RIP Records smoosh together the reward is a brand new monthly, genre spanning series called ‘Nice Swan Introduces…’.

Unsurprisingly, it promises to be quite the lockdown treat, both labels have been doing wondrous things in recent years, releasing debut tracks from the likes of Blossoms, Sports Team, Pip Blom, FUR, Hotel Lux and many more. This month they’re giving the proverbial leg up to Liverpool hailing lads Courting and the playfully titled track ‘David Byrne’s Bad Side’. A breath of fresh Mersey air, the band are fast nabbing themselves a sturdy fan base off the back of ‘Not Yr Man’ and chanty number ‘Football’ alongside support slots for Sports Team, FEET and Heavy Lungs.

The track is a natty burst of high energy, lyrics narrated observationally, perfect for summers spent carousing down the park playing tops off ping pong with just the one person from another household that isn’t yours. So what’s the link to David Byrne? Spoiler alert, there isn’t one. When asked about where the title comes from, lead singer and guitarist Sean sums it up;

“David Byrne’s Badside has nothing to do with the Talking Heads frontman. It’s about class tourism and the casual racism that exists in Britain today. It’s a portrait of the type of person who votes UKIP and wants to close our borders yet promises they’re not a racist. The type of person who says to buy British yet owns a Porsche.”

Essentially chortling at the state of British culture, it echoes the prevalent and lippy side to Indie bands that’s so present today. It’s a vigorous track spruced with cheer and opinion, an exciting time for Courting as they add a generous glug of fuel to the Britpop revival fire.