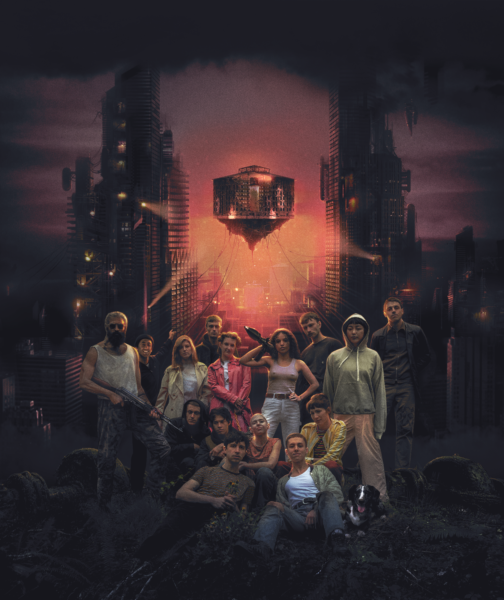 Crack Cloud have always appeared as a purposeful anomaly.

Whether in the aloofness that surrounds the open door nature of the project / collective / cult / state of mind, the further confounding outlets that have spawned from within and been latched onto in Nov3l and Military Genius, or the reason for their existence being their unified spirit in combating their own personal battles against the opiate addiction emergency in Canada – since their emergence they have seemingly been a refreshing antidote against the cyclical norm of musical consumption through their very identity. While their very being in no question informs their music, what is revealed in debut album ‘Pain Olympics’ is just how we are all so unnaturally focused on the wonderings and intrigue of the next publicised obsession, when it simply pales in importance when compared to the singular, purposeful vision that Crack Cloud present.

‘Pain Olympics’ is an utterly bewildering yet hardly inaccessible work, that harbours all of its extreme premonitions and moods and channels them into a striking perception of the unwavering haste that’s instantaneously crafting the dystopia of the modern age. Constantly eviscerating itself to find a new form, across it’s spritely half hour it terrorises itself in industrial clamour, embraces gracious and tear-inducing beauty and stands bare and utterly fragile in the terrifying cataclysm of judgement. ‘Post Truth (Birth of A Nation)’ cascades in a discordant panic attack of whirring machinery and impudent brass, all before effervescing into a stunning progression of halcyon wonder that sounds as blessedly raw and honest in its conduction you’re awaiting the stunned silence of incomprehension at its finality.

The near constant consternation that provokes the albums tender being is only vindicated further by just how unequivocally seamless it all feels – a televised dream orchestrated by the most apprehensive of fibres sparking within your sub-conscience. ‘Something’s Gotta Give’, in all it’s overbearing trepidation and lingering sombreness, remains a gripping moment – Zach Choy frothing in wait for everything to inevitably collapse, the dread personified by the swollen, swooping strings that drape across the track like a noose. ‘The Next Fix (A Safe Space)’, cuddling itself in-between ghostly synth and stirring brass as Choy lets loose across perhaps the most accessibly uniform beat and album highlight ‘Favour Your Fortune’, a venomous hip-hop take – both embrace their thirst for variation while never throwing everything in for the sake of it – it’s done with textural prowess, an eye for absorption.

What’s so pleasing about Crack Cloud – as particularly exhibited through this record – is they are constantly finding their feet, much how they are through the narrative of Pain Olympics and the very reality we find ourselves in today. It’s a constantly revolving door that perhaps leads to a brave new world of understanding, or just an exaggerated depiction of the very nightmare reality brings upon itself today. If this is the ‘post-truth’ society CC wish to submerge themselves within, perhaps we just need to latch on and see where the ride takes us, else we’ll never know what could be. As Choy, labouring across the stunning closer ‘Angel Dust (Eternal Peace)’, suggests; “the past, it hunts us all, and the future is littered with doubt‘ – ‘Pain Olympics’ is living testament of being present.