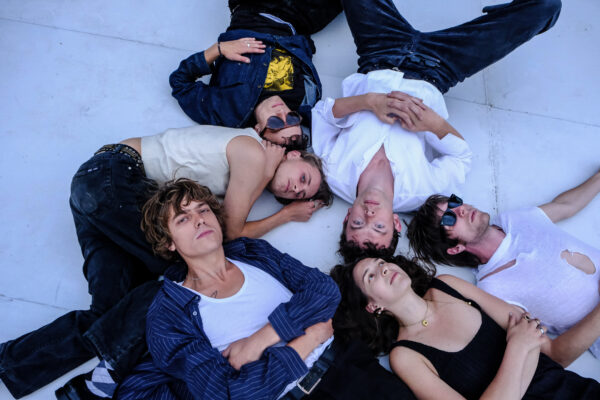 Pop culture connoisseurs DEADLETTER are back with the steely new single ‘Binge’; embracing the consequences of indulgence, in a gritty earworm track that flirts endlessly with the human race’s perverse idiosyncrasies.

Following an ugly, grey London winter, the six members of DEADLETTER were presented with an itch. An itch that could only be scratched if they bowed to their darkest desires. An invitation to ‘binge’ if you will. Now although bingeing is not a phenomenon exclusive to these six, it was certainly enough to spawn a viciously catchy chorus that braces their latest track, with the relatable refrain of “Wants, needs, hopes, dreams, life’s a binge”.

Despite vocalist Zac Lawrence’s confessing the sextet’s songwriting leans on the formula of “drumbeat, bassline, lyrics, seasoning”, the track is far more than the sum of these parts. DEADLETTER have arrived at their purple patch- bringing the wry, part-time-anthropologist lyricism of 20’s post-punk, into a world of music influenced by the famed Talking Heads and Television. Making for a delightfully sour cocktail.

Embracing minimalist instrumentation, the track’s chosen subject matter ironically deals in perverse decadence; and its effect on those who choose to indulge in it. It sees Lawrence endlessly listing the objects and actions that deliver the human race tiny serotonin hits, including (but not limited to): “booze”, “silken garments” and “shining jewels”, and proceeding to commentate on the consequences of said ‘Binge’.

There’s a tribal ferocity that underpins the three and a half minutes. Surfacing in Poppy Richler’s sweeping saxophone swells that gain vibrancy and potency in the chorus, sweetened by a droll cowbell, and Phrygian gang vocals. It’s no surprise that this track came together in a fleeting 25-minute practice session; it feels remarkably immediate and needs no superficial embellishment.

Encapsulating the constantly overworked brains of the newsflash generation near-perfectly in ‘Binge’, which appears as much an exercise in catharsis for the band as it is for their listeners, this is DEADLETTER’s strongest track to date.