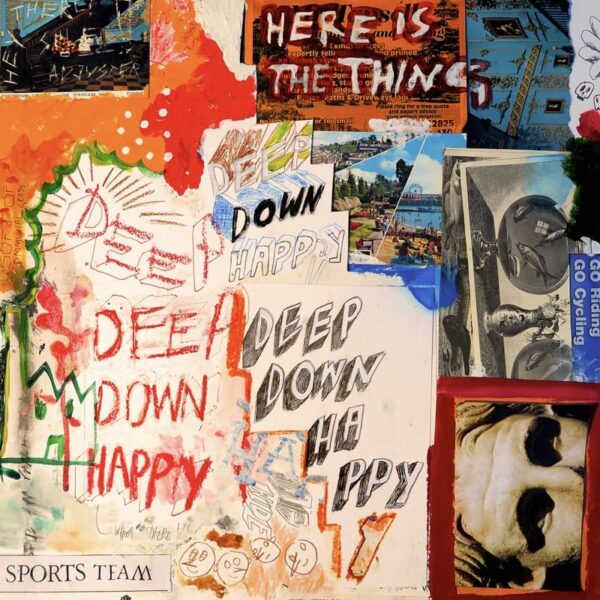 Sports Team have always had a way of rubbing you up the wrong way haven’t they?

Stood there outside their London flat looking like the cast of an out of touch reboot of Grange Hill, giving Matty Healy and the New Musical Express a ribbing like they really think something of themselves while coming out with songs that could’ve been written by David Brent. It’s really got up your nose hasn’t it? You’re frothing at the thought of them being everywhere. I’m sorry to have to tell you, but this is basically where Sports Team have thrived, they’ve made a royal success out of winding you up.

Where some have cited a lack of subtlety and intelligence in their work, it only takes a short amount of time to realise their ever British coyness lies in their protruding, boastful approach. ‘Here’s The Thing’ and ‘The Races’ were so point-blank in their fragrant teasing that they were more than fit to anger someone as definitive singles, their desire to wind you up simply gifting them gratification when it’s done so easily. Concocting the sort of empty turns of phrase that 21st century Britain depends upon to feel some sense of comfort and achievement, the aforementioned ‘Here’s The Thing’ stoked the fire under which ‘Deep Down Happy’ could truly sear – an impudent declaration that said more in their sardonic take on dumbed-down witticism than most of the pithy poeticism that is so fawned over for it’s understanding of modern day society.

It can be said the political is the personal, and most seemingly need to spend the time over-analysing Sports Team’s overall identity as much as their actual music. Sure, their impudent glorifying of middle England and at times contrived inclusion of a Wetherspoon in Camberley is once again worn on their sleeve to incite the easily vexed, but more than anything it is simply not being afraid to hide who they are, it’s simply playing with what they know. If you’re fine with Liam Gallagher being a prick because at least he doesn’t hide it, what’s the difference here?

Yes, a polished (yet not as incisive) ‘Camel Crew’ remains, it’s mocking of HMLTD’s major label rise and fall can’t help but wrangle with the fact ‘Deep Down Happy’ has already began to enjoy the sort of advertising backing Island can afford. Yet this simply cements the band’s sheer brazenness – they know you think they’re hypocritical, and they’ll use it to successfully stir the pot you’re weakly frothing over even further, thus it remains for more reason than it being simply a fan favourite. Yet through opener ‘Lander’, Rob Knaggs personifies the unfounded dreams of the provincial lad turned young professional from the home counties (“Oh, you’re a tiny bit old for this, don’t you think it’s gonna get better?”) with a solemn sense of defeat resonating in his chest – defining not only their perception of the circle of modern life but acknowledging the weight they carry in everyone else’s perception of them. In the age of self-criticism and being able to take the piss out of yourself being a rewarding trait, Sports Team cleverly balance handing it out and taking it too, while teasing the industry into making it work their way without you even realising.

‘Deep Down Happy’, first and foremost, is simply a British guitar-pop record of it’s time. It embraces all it’s political and personal gripes and misfires while middling around trying to work out what to do next – while realising it wasn’t anything doing anything else in the first place. ‘Long Hot Summer’, perhaps the more humble moment of the record, still offers an elbow to the ribs of those mocking them for a lack of intelligent poeticism – “ oh love needs glue but you bring Pritt stick, and there’s no carrot just a big stick” – yet it embodies the mundanity of non-metropolitan upbringings and debonair English living that no matter which life direction you end up deciding to take, it’s probably going to be pretty tedious. As Rice debates over whether being in a band is really all it’s cracked up to be, the realisation that doing anything else is probably less gratifying dawns across not only his suddenly pensive lyricism, but the record as a whole – “I’ve been reeling the line in, I’ve been playing for days, If the joke isn’t landing, well, I’d be happy to wait.”

It’s here you realise the band are leaving themselves out to dry as much as they are anyone else, and it gives ‘Deep Down Happy’ a pertinent sense of actuality.

‘Deep Down Happy’ is out now – available to purchase here.