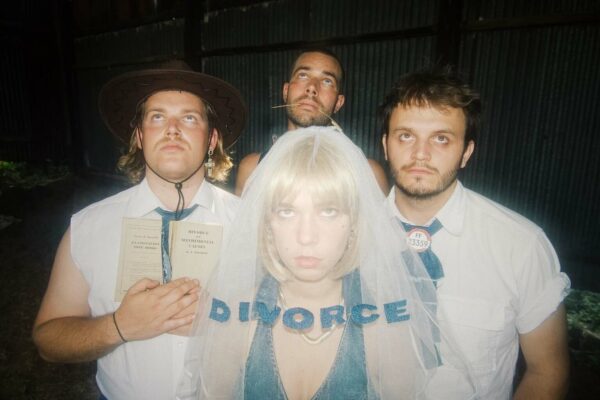 Where campy westerns deal with the eternal struggle between sheriff and outlaw, and a country ballad reveals the melodrama of bygone gender-roles, Divorce’s latest single ‘Checking Out’ squeezes both into 4 minutes and says ‘Hey, look at this!’

The single (released ahead of their debut EP ‘Get Mean’) reads like a stranger-than-fiction newspaper clipping, the type which haunts you for a few days. Atop of overdriven guitars, our anxious-attachment-style narrator declares ‘this front room ain’t big enough for the both of us’, and murders her negligent and aptly named husband ‘Bobby’.

Tiger Cohen-Towell says that: ‘The track was written when a group of musician’s friends and I did a songwriting exercise […] I wanted to writer something that was as a far away from myself as possible, I was tired of my own personal narratives.’ With the hook placed pleasingly at the turnaround and genuine character development, ’Checking Out’ is proof of Divorce’s knack for catchy storytelling.