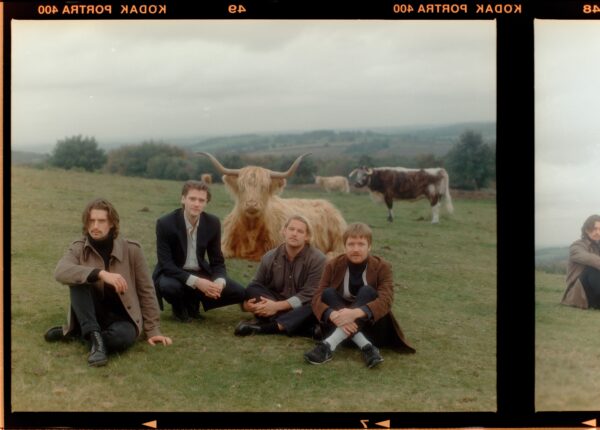 Clean-cut representatives for the suited and booted post-punks of our generation, you’ll find Nottingham’s Do Nothing churning out sonic gold before they’ve even had chance to slurp their morning brew. Now, more than a few mugs in and following one stand-out debut, the four-piece are back to the grind with their latest single ‘Uber Alles’ and the announcement of their second EP ‘Glueland’.

With the same expected prowess of earlier releases, the track is both slick in sound and polished in all the right places. As chugging bass meets melodious riffs, the single transpires as ‘Zero Dollar Bill’s pensive older brother. Stretching out the growing pains of these former fledgling years, frontman Chris Bailey strides into his sharp-tongued lyrics with a euphonious ease. Topping it all off, a quickfire dose of strident guitars serve as the Midlands lads’ closing statement.

Expanding on the forthcoming EP, Bailey comments: “‘Glueland’ is about the inevitable feeling of being thrown onto a big pile of your own rubbish and paddling around in it like some kind of dusty walrus. We worked to make the songs and artwork all feel like they came from the same universe. It came from recording situations that we felt very comfortable in, and the tedious absence of live shows meant that we could stagger in some new directions without having to make sure that it all worked onstage. Don’t worry, we made sure not to actually write about being in lockdown… because who wants to hear about that?” He’s not wrong.

Comfortable in experimentation and with the enviable knack for an alternative hit, ‘Uber Alles’ will leave you suitably satisfied and contemplating ‘Glueland’s next sitting. Safe to say, springtime couldn’t come sooner.

The ‘Glueland’ EP will be released on 12th March 2021 via Exact Truth.