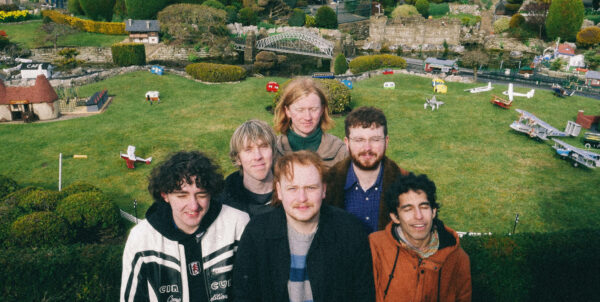 Quibbles about congestion fees,  rear-views of Cyclists’ bums; Toyota Yaris engine rumbles; sampled evil cackles resounding to fade… These may seem like the madcap plans sniggered-up by schoolboys during lunch breaks. But in the hands of London newcomers Dog, they form the essential mechanisms of the meticulously crafted debut single: ‘Beep! Beep! Honk! Honk!’.

Served up as the sextet’s noble attempt to infiltrate trucker/driving playlists, (and mastered in Australia by Mikey Young of Eddy’s Current Suppression Ring), this unlikely companion to ‘Highway to Hell’ or ‘Born with a Feeling’ is greased with more U-turns, speed bumps and pothole jerks, than any god-willing road-trip deserves. With its cheerful nods to Madness’ ‘Driving in My Car’, and a giddying impulse for rollicking King Gizzard riffage, it comes to resemble Hunter S Thompson’s hallucinations through the Nevada desert, rather than a cushy hatchback voyage across a tranquil M4.

While slotting gladly into the capital’s penchant for a grunting, ramshackle riff band, Dog mark their own territory with a refreshing dose of mischief and irreverence. As likely to make you giggle, as it is to force a scratching of the chins, it’s the obsessive attention to detail which earns ‘Beep! Beep’! It’s artistic weight. Notice the jolting, whiplash tempo shifts, or how the melancholic King Krule chords blindside you. Ingest that keyboard fart  or saxophone squiggle snug in the mix. There’s no doubt here as to the grander purpose enclosed within Dog’s bashful, ear-to-ear grins.