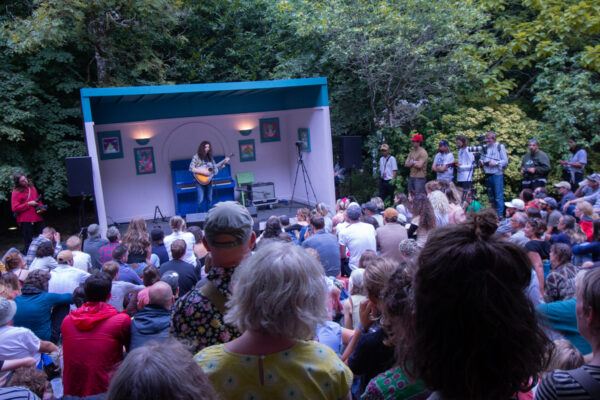 Last weekend, End Of The Road returned to Larmer Tree Gardens for its 17th and most triumphant year yet.

Heralded for its eclectic and diverse line-up, festival-goers had daily opportunities to float between alt-pop, traditional folk, hard-core and veterans of the left-field, albeit dealing with a handful of frustrating clashes. Whilst the four headliners –  Khruangbin, Fleet Foxes, Pixies & Bright Eyes – were impressive, it was the smaller poster print and hidden festival gems that grabbed the spotlight.

At 10,000 capacity, this medium sized festival retained the familial aura of a smaller affair, with idiosyncrasies like intimate secret sets, hand-delivered post and games enclaves nestled within the enchanted forest. In a team of two, So Young managed to see 38 acts across the weekend, grabbing portraits and interviews of a few along the way. Below is an endeavour to recall these moments… 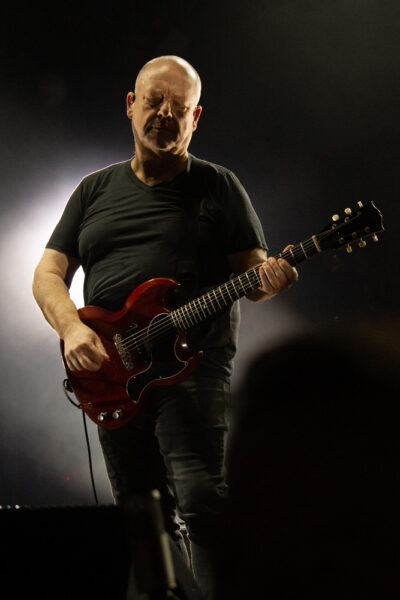 Arriving at the site Thursday night, crowds including babies in headsets, to older folk with walking sticks, gathered by the main stage eagerly awaiting the eccentric and rhythmic pop of Sudan Archives. Empowering the audience with songs about femininity and identity from her new album, ‘Natural Brown Prom Queen’, the set was brought to a close with crowd favourite ‘Come Meh Way’ (a tune familiar to fans of Sharon Murphy’s Babyteeth film). Headliners Khruangbin followed as the weekend’s first headliner, their wordless sets packed with mellow cover medleys apt for night one (unless one opted to see Pigs x7 instead).

Kicking off Friday’s live music was London-based 4-piece Automotion, whose prog jams and janky guitar riffs filled the Big Top tent with a dramatic heaviness replicating their recent EP ‘In Motion’. Step outside this tent and one may have seen Shovel Dance Collective preparing their procession from arena to main stage. Leading the decolonisation of English folk music in a similar fashion to Broadside Hacks (whose members Aga Ujma & Naima Bock were also performing the same day), Shovel Dance Collective made a point of reminding festival-goers of the genre’s working-class origins. The nine-piece played their interpretations of traditional songs like ‘Newcastle,’ and payed homage to End of The Road folk alumni Shirley Collins, plastering smiles across the crowd’s increasingly sunburnt faces. Later that day, Tinariwen – a group of Tuareg rebels heralded as pioneers of Tishoumaren (desert blues) – would grace the same stage, playing their signature fusion of folk and rock from the Sahara region. Delivering lyrics recounting their experiences of rebellion and nomadic living, Tinariwen’s set was one of the weekend’s highlights. 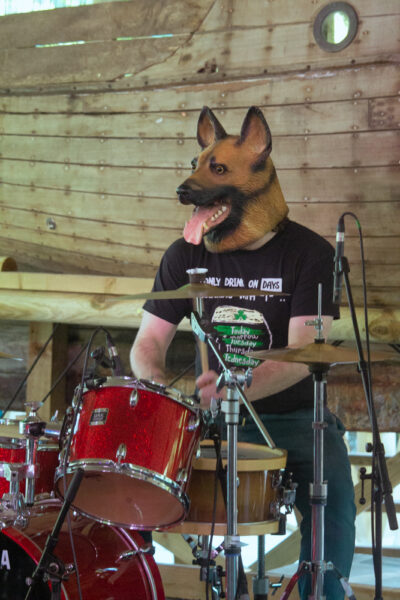 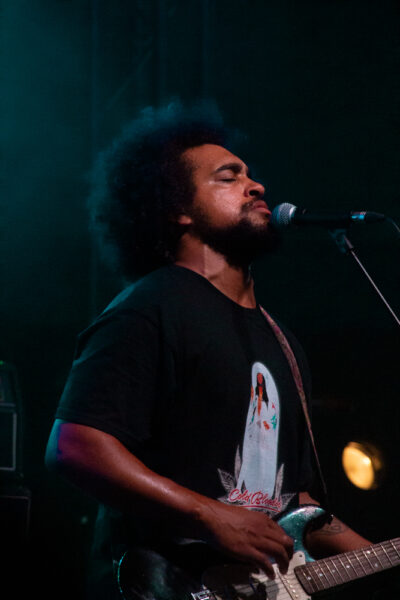 Energy radiated across the first day, in the form of KEG’s unhinged cross-stage bear crawls and yelps, Mandy, Indiana’s industrial trance and Wu-Lu’s ability to inspire a tent-wide mosh pit with ‘South’ and ‘Ten.’ And let’s not forget donk-infused newcomers Fat Dog, whose rowdy sets have secured them support duties for Fat White Family and an archive of Lou Smith gig videos over a short period.

With clear awareness of London’s underground music culture, the line-up boasted bands including Kraut-punks The Umlauts, rising electronic duo Jockstrap and of course, og’s black midi. The latter’s performance of their latest album ‘Hellfire’ danced between mind-boggling instrumental dexterity disguised as chaos, and total noise. Exactly what one would hope from a black midi gig. However, musical discovery took more forms than this subculture alone. Take the electrifying Afro-Infinitist collective Steam Down (whose weekly events at Lewisham’s Matchstick Piehouse explore sounds of the city through jamming), Grove’s dancehall infused rap, or Scalping’s massive live techno. End of the Road’s line-up had something for everyone, a sentiment not exclusive to new music discovery by any means. 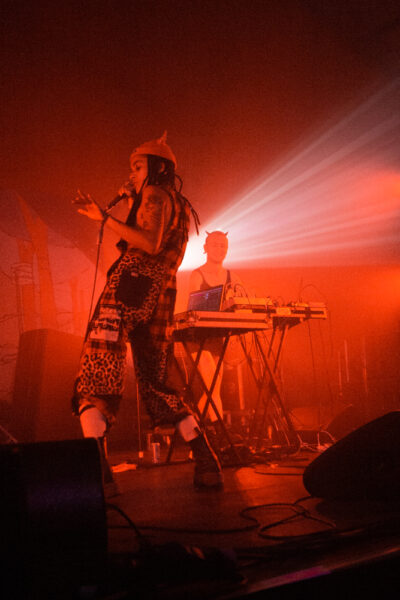 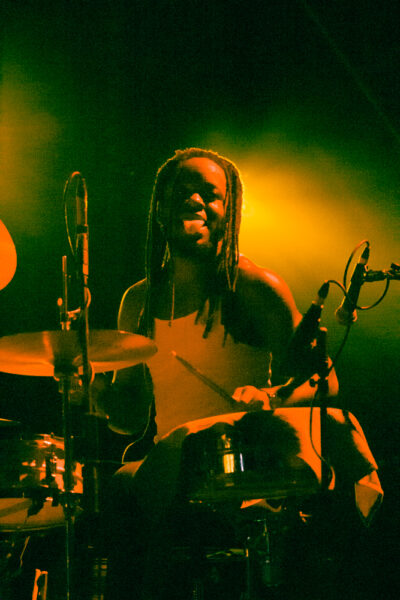 Across the weekend, the festival also hosted a series of long-established musicians, made more special by the fact many were off the beaten track of 2022’s rich festival season. Longstanding Ethiopian keyboardist Hailu Mergia brought his rare and understated compositions to an enthused crowd, perhaps still jittery from Pixies’ heraldic headline the night before. Drawing the largest crowd of the weekend, the alt-rock four-piece brought their hits (twice in the case of ‘Wave of Mutilation’) to a crowd who sung back every word, many of them giddy from finally seeing the legendary band that soundtracked their teenage years in the flesh. 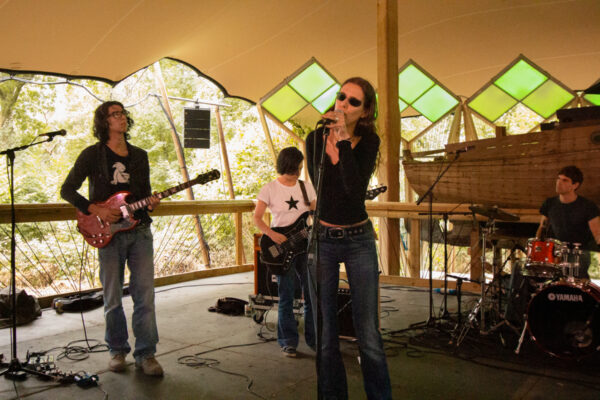 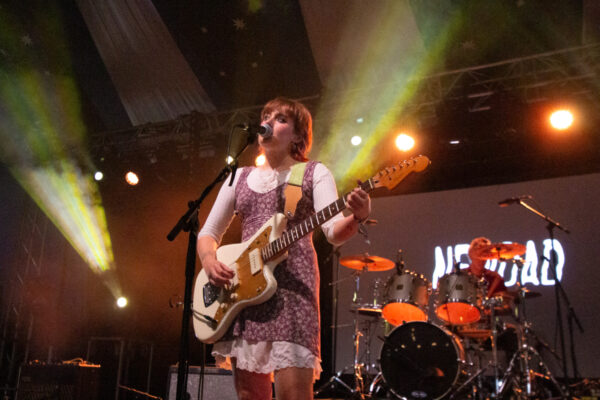 Alternative guitar music was a notable element of this year’s festival, championed by a handful of female newcomers, always welcome in a persistent climate of gender un-diverse festival line-ups. Bar Italia brought hints of Mazzy Star to the freshly built boat stage hidden in the woods (there is a boat above it – no water included), whilst Ireland’s NewDad and American solo artist Soccer Mommy brought their dream pop and shoegazing anthems to life. The stand out set in this regard was Nukuluk early Saturday afternoon, whose fusion of 90s emo, electronic sampling and rap established the 5-piece as one of the most exciting discoveries of the weekend. Bringing their EP Disaster Pop to the packed-out Tipi Stage (impressive for 1pm on a Saturday following late night sets from glum-pop duo Audiobooks, DJ Laurel Halo and the famed secret set from <BEAK), Nukuluk put themselves forwards as ones to keep an eye on. 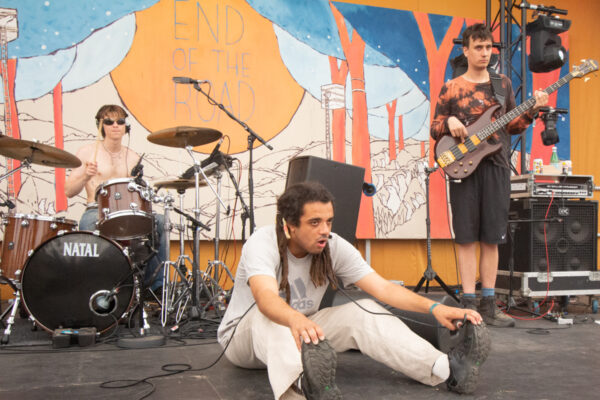 Sunday brought with it a needed respite, sound tracked by folk-rocker Kurt Vile’s secret set at the Piano Stage. Within the enchanted forest lies a stage no bigger than the one at your favourite low-ceilinged independent venue (perhaps even smaller). Each year, The Line of Best Fit curates a series of short performances and Q&A’s, hosting main stage acts across the weekend (this year’s line-up included Porridge Radio, Perfume Genius and Lucy Dacus amongst others). Playing only three songs, it felt necessary to prolong the feel-good good music, with a perfectly timed set from Willie J. Healey just after. We briefly caught up with him and found out what he’s been up to this summer. 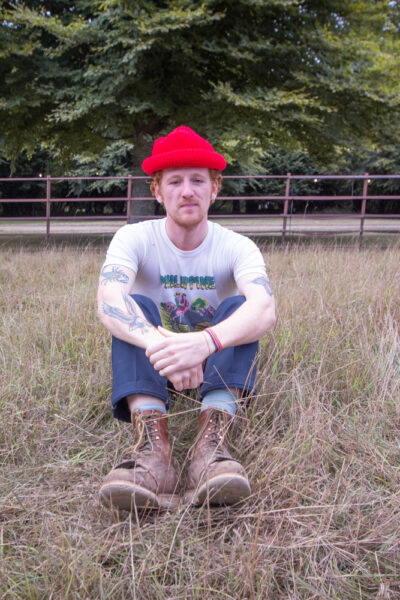 Can you tell me about your new single ‘Tiger Woods?’

The track is the first of a handful of songs I’m hoping to release in the future. It’s very funky. My friend lent me a drum machine and this became a doorway to exploring different sounds. It’s just a love song really. More generally, it’s about holding on for dear life.

The funk element is a lot more overt than the tracks on your last album ‘Twin Heavy’.

The track represents a new direction in my music. It’s a natural progression for me after two years of not playing live. That period led me to a creative place I wouldn’t have got to otherwise.

Have your live performances changed as a result?

Not being able to play live has made me a lot more grateful. I feel like my outlook on life and not just music has changed, so the shift in performance naturally followed.

When you play a new song for the first time, how do you feel?

With ‘Tiger Woods,’ I was a bit more hesitant because it’s so different to the rest of our set. My worries derive from how the audience will receive it. But it’s gone well! Art in general should push you to the edge of your comfort zone or it becomes stagnant. I welcome the fear.

How’s this summer’s festival season been?

The band and I are treating these shows as celebrations. On and offstage we’re having a great time. Before the pandemic, I never would’ve come to a festival a few days early but we all want to be more immersed in the antics now.

I don’t blame you when it comes to festivals like EOTR. Who have you seen this weekend?

Alabaster Deplume, Kevin Morby, The Bug Club. It feels like this festival line up is a really tasty one. You can go to any stage and it’ll be amazing.

You mentioned you tried your hand (or feet) at the silent disco?

Last night I was completely sober dancing for hours and hours to every hit you could possibly imagine…I danced so hard I broke my shoes.

Have you come across the karaoke stage yet?

I haven’t…What would be your song? Sorry you’re asking the questions…

‘Accidentally in Love’ Counting Crows. And yours?

For years I was too shy to do karaoke. But now it’s ‘Hungry Heart’ by Bruce Springsteen because you have no choice but to belt it.

If you could curate a festival with three headliners and any stalls of your choice, what would they be?

How are you feeling ahead of your Big Top debut?

Willie’s back to back groove-filled rhythms expelled any semblance of self-pity the audience may have had after two days of sending it. Bringing the day to a close, folk singer-songwriter Aldous Harding took to the Garden Stage with a truly transfixing performance. Playing songs from her latest album ‘Warm Chris’ alongside fan favourites including ‘The Barrel’, the Kiwi singer strained her body and facial expressions into mesmerising contortions, commanding total ownership of the audience. At points you could hear a single cough or crack of a can lid on stage. With the help of her band, including H. Hawkline on guitar, the warm yet restrained musical arrangements came together to create an awe-inspiring live experience that seemed to affect even the Gods. 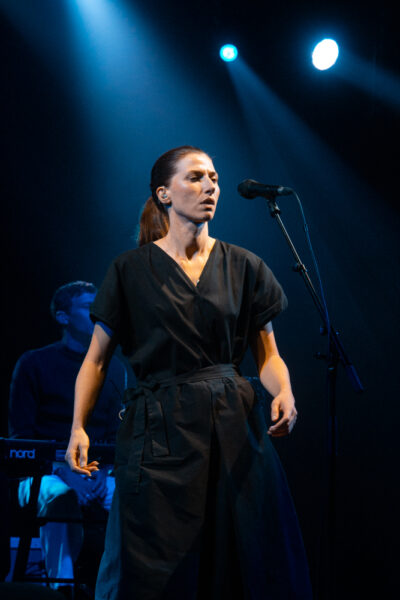 After a weekend of sun and no rain, Aldous returned for her encore, glazed over by a light drizzle. The second (genuinely) her set finished, the heavens opened and torrential rain, lightning and thunderstorms erupted to the point of mandatory tent evacuation, delaying Yard Act’s closing slot. This only added to the rising tension surrounding the Mercury nominated band’s return to the festival (who later noted how they had to compete with Little Simz at a much smaller stage last year). This tension was unleashed to an unruly extent as soon as the notoriously pithy 4-piece took to stage, playing favourites from their debut album ‘The Overload’. Frontman James Smith is known to run his mouth with droll sentiments about the mundanity of life, yet he exuded genuine sincerity and gratitude to be playing at what he and many others agreed to be one of the most special festivals around.

All in all, a dramatic, heartfelt and memorable end to 2022’s festival season. Unsurprisingly, early bird tickets for next year’s End of the Road have already sold out in record time. Bring on 2023!