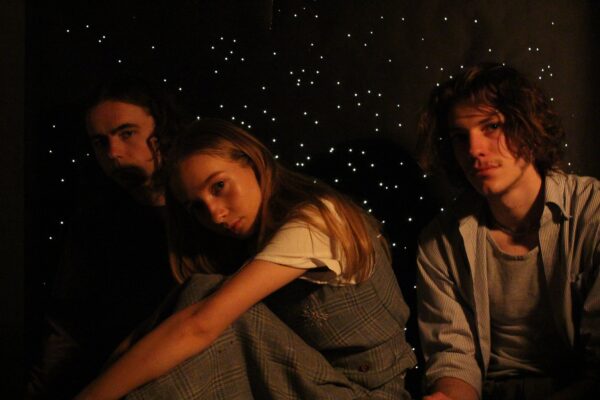 Staring into the harsh face of lockdown round two, dare we ask, “how’re you feeling?”. With tinnies in the park now out of the question and Netflix boxsets well and truly rinsed, I’m sure we could hazard a guess. Thankfully for our hearts, minds and… sanity, Hampshire three-piece Drug Store Romeos have released their latest single of unadulterated fun, ‘Jim, Let’s Play’.

Floating through the cosmos of dream-pop-trip-hop, frontwoman Sarah Downey softens the senses with her fuzzy-tinged vocals. In a similar vein to The Cranberries, Downey’s mastered the art of entrancement with ease, and barely above a whisper. As light-headed synths dance around a simplistic yet undeniably catchy  melody, we’re sent whirring along a dizzying ride of childish nostalgia. Could this be the over 18 answer to breathing in helium balloons? Quite possibly.

Being sure to shake the sonic can before popping, sporadic guitars and shimmering percussion climax in a Wolf Alice-esque soundscape. As we’re enveloped in a vivid technicolour emporium, the track offers a bright-eyed moment of pure escapism. The fourth single, from what can only be described as a triumphant string of releases, ‘Jim, Let’s Play’ sees the Fleet band full of vitality and unfazed by the turbulent world outside. Let’s hope the feeling catches.

Given that two thirds of the trio, Charlie and Jonny, were originally childhood friends, it seems fitting that these beginnings can be deciphered from their endearing sound quality and approach to music making. Never mind Jim, can we play in the sandpit?