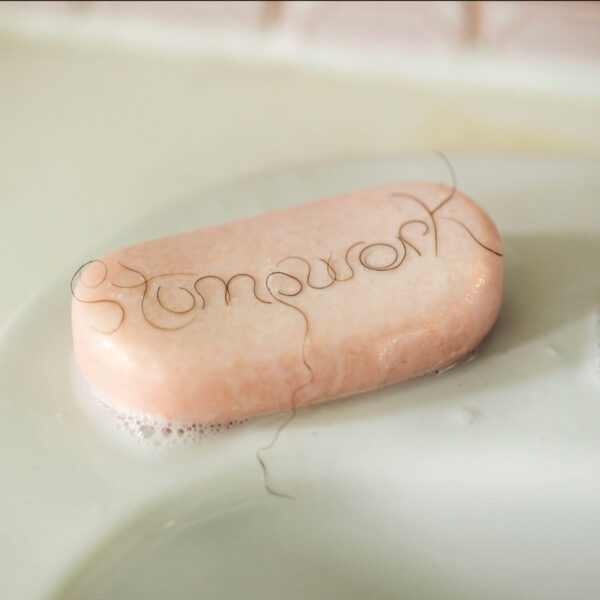 Perhaps the most applicable self-referential description for an album whose lyrical content was gathered entirely through observing the world whilst strolling around London. Florence Shaw’s laconic and forthright outlook on the world is maybe what most iconifies Dry Cleaning as a creative impetus. In ‘Stumpwork’, narrative assumes a totally new meaning, specifically a kind of non-meaning; a senseless story narrated in a senseless, absurd world.

However, this is not an album consisting of several songs thrown together serendipitously. ‘Stumpwork’ collates various different themes which have survived for the band over time, not ephemeral coincidences or occurrences, but repeatable issues and concerns. And like many other crucial creatives, notably John Cage or Steve Reich, for example, Dry Cleaning make interesting what we all discard too often as being boring, or as lacking any form of value. This band produce a vitalised interest in the mundane facets of existence: ‘Automatic door’, ‘peaceful fish meat lying dead and flat in a chiller’, ‘curtains partly hanging’.

Dry Cleaning appear to operate on a different wavelength to most, counter-balancing the stubborn determination of most city dwellers energised by ambition and corporate labour. Both Shaw’s lyrics and the sloppy, Pavement-esque instrumentation together represent an effective parody of our current climate; reminding us that from time to time we must also live in the slow lane and allow the world to come to us rather than seek it out. And, if possible, to sometimes put an end to boring interactions with the response: ‘I don’t give a fuck dick face.’

Leading up to ‘Stumpwork’, we heard four compelling singles. Firstly, ‘Don’t Press Me’, a continuation of Dry Cleaning’s punchy, riff-led style recognisable throughout New Long Leg. Then came ‘Anna Calls From The Arctic’, the first sign that this new album wasn’t going to be quite as expected. Electronic drums, synthesisers and even some saxophone, this track is fleshed out and given space: what we previously recognised as an exclusively guitar focussed style is replaced by a new-found subtlety for ambience. This is where Dry Cleaning begin to explore effect; and on ‘Stumpwork’, we witness the development of this new stylistic language which equips each song with much greater force than we saw previously.

Never before have we been so enchanted by a household tortoise named ‘Gary Ashby’, or the fact that our main form of influence over our decision making is mediated by consumer culture: “Autonomy can be found at the shops, for me, for me.”

Following the success of their debut album ‘New Long Leg’, the band returned to record with James Parish for this second album, expanding on and regenerating their pre-existing methods for recording. However, this time, Shaw took it one step further by improvising many of her lyrics straight onto the record. From the street straight into the microphone, her observations take on a life of their own, presented and filtered through a strong sense of subjectivity and personal political ideology: “I think if you make something observational, which I think I do, it’s political.”

With prevailing themes such as loss, masculinity, femininity, and family, Shaw excavates around intricate socio-political issues through the lens of punctuality. No rock is left unturned: “There were two murders of women in London that were extensively covered on the news, and the specific details of one of those murders were reported on whilst we were at Rockfield [recording studio]. That coverage influenced some of my writing and my state of mind.” ‘Hot Penny Day’ quickly reflects this through long-sustained dread chords coupled with lyrics such as “I see male violence everywhere.’

The ability that the rest of the band possess in matching these exact moods and themes sonically is the crucial facet to the importance of and synergy between all four members of Dry Cleaning. Rhythm can sway between two opposite poles frequently, from tight and rigid to loose and disordered – much like the day to day political ambiguity and the inelastic, conservative dogmatism which underpins the social context for ‘Stumpwork’. “Everything’s expensive, opaque and privatised”

And whilst the band grieve for those depicted in national newspapers, so do they for those close to them. Bassist Lewis Maynard lost his mother just after the release of their debut album, and the pragmatism involved in making the second whilst enjoying the success of the first provided him with at least some positivity amongst a period of intense pain. Maynard reveals: “I see the album as a celebration of what she gave us and a reflection of how fortunate we were to know her. The success of the band became a distraction for the whole family while grieving. And it gave even more importance to what we are doing,”

Drummer Tom Dowse also lost his grandfather during the making of ‘Stumpwork’: “It’s of course devastating to lose close family members but their legacy in Dry Cleaning is wholly positive. The moments in the songs which are upbeat and joyful made me think of them both the most.” The band are willing to accept the difficulties of grief but also recognise that this pain is reconcilable, as Shaw notes in Kwenchy Kups, “things are shit, but they’re gonna be ok.”

I think it is Dry Cleaning’s ability to resurrect those people or objects which no longer appear to contain life which make the band, and ‘Stumpwork’ more specifically, so profound. Totally lacking any form of self-indulgence or ego, transcending any affiliation with the post-punk label, and strengthening subjective integrity, this record is undeniably authentic. A tremendous follow up to a debut album very difficult to top; Dry Cleaning clearly continue to raise the roof. The album opener says it all:

“I don’t want to go on about it but we’re back in business. Just a sweet, natural start. We will flower.”

‘Stumpwork’ is out now via 4AD.