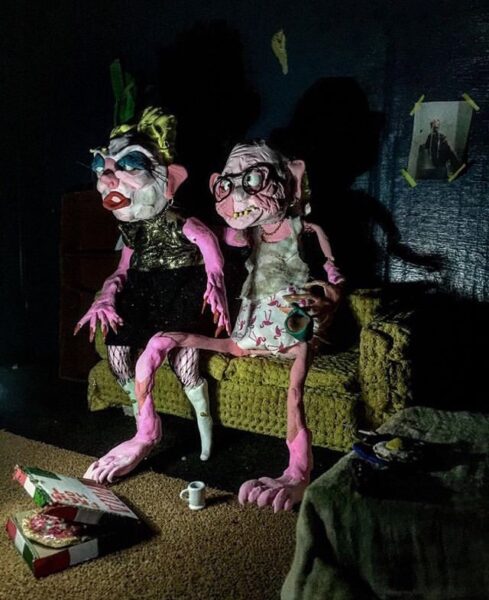 ‘Wet Toes’, the new collaborative short film from artists Edie Lawrence and Jean Penne, is a masterpiece of the uncomfortable.

Opening with the sound of someone hacking up a lung, before building into the off-kilter fairground synths that provide musical accompaniment to the tale, ‘Wet Toes’ tells the story of a young man enthralled by his dad’s gorgeous new girlfriend, a skull-tattooed snake lover, who’s ‘much cooler than mum’. This fascination builds to the point ‘I’ve had to start telling my dad there’s a game called wet toes’ narrates Penne, whose character is now obsessed to the point of licking his dad’s girlfriend’s feet under this ruse. Quasi-incest, foot-fetishism, and lack of consent? Sounds about right.

Whilst not explicitly surreal, Wet Toes is sufficiently planted in the uncanny valley so that it clings to your skin as viewer anxiety grows. Penne’s monotone delivery disarms the viewer, mixing an almost Inbetweeners-esque puerility with the tail-end of a horrible schizophrenic episode, whilst Edie Lawrence’s animation serves as a smorgasbord of grotesque visuals, as flesh-coloured plasticine turns darker and more menacing.

The sound of panting and strained beer drinking as the end credits roll adds the final touch to a piece of work so captivating that over the course of 70 seconds, an otherwise innocuous bodily function becomes instead sleazy and unnerving. ‘Wet Toes’ being the first in a series of collaborations between Penne and Lawrence, this spectacle is just beginning. And thank god for that.

Jean Penne’s next gig is at the Five Bells 15th June.