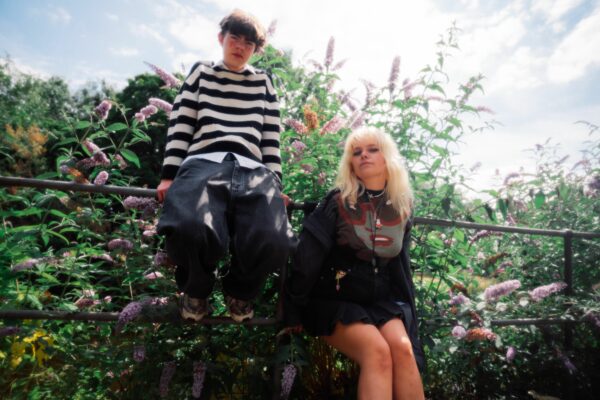 Much like groups Radiohead and The Cure, No Windows can also be added to the important roster of artists who augmented their musical journey at school. However, and unlike their categorical contemporaries, this duo, made up of eighteen-year-old vocalist Verity Slangen and seventeen-year-old multi-instrumentalist Morgan Morris, are still serving, but almost coming to the end of, their 13-year jail sentence.

Such is one benefit amongst the countless negatives which enthral the social media generation of the late gen-z demographic – the potential for collaboration coupled with the ability to promote art to a widespread audience. Perhaps this is why these days we are able to enjoy the work of artists at such a young age. More accurately in this context however is the fact that Verity and Morgan have been able to write such astonishingly brilliant music during their very early adulthood. Here, pure talent is the necessary precondition to success, something which we will no doubt be the witness of in the coming years. If you enjoy reciting the saying, ‘I knew them way before they were massive’, it’s time to listen closely.

As a focussed and ambitious fourteen-year-old at the time, Verity posted an Instagram advert looking for likeminded musicians to collaborate within Edinburgh. Although equipped with the writing skills most singers only dream of, Verity required strong instrumental support; something which Morgan was only too ready to provide, having grown up in an intensely musical household littered throughout with guitars and recording equipment. A year’s difference at school failed to stop Morgan responding to Verity’s post.

The band have always maintained just how important these former years were on the creative evolution of No Windows. Avoiding a single-minded journey into one specific genre of music was responsible for the diversity within their latest tracks ‘Shout (Red Song)’ and ‘No Clue (Green Song)’, which collate a dense dream-pop impression coupled with a shoegazey, melancholic aesthetic. The importance of playing music purely for its sonic resonance was, for both Verity and Morgan, why these years of performing at school informs their naturally assembled originality so well today. Whilst Mac Demarco’s initial project, Makeout Videotape, exposed to Morgan the opportunities presented through writing in alternative tunings, notably, open D, covering old classics such as ‘Dream a Little Dream of Me’ and newer bangers such as Declan McKenna’s ‘British Bombs’ helped establish the suitable conditions for No Windows’ upcoming EP ‘Fishboy’. 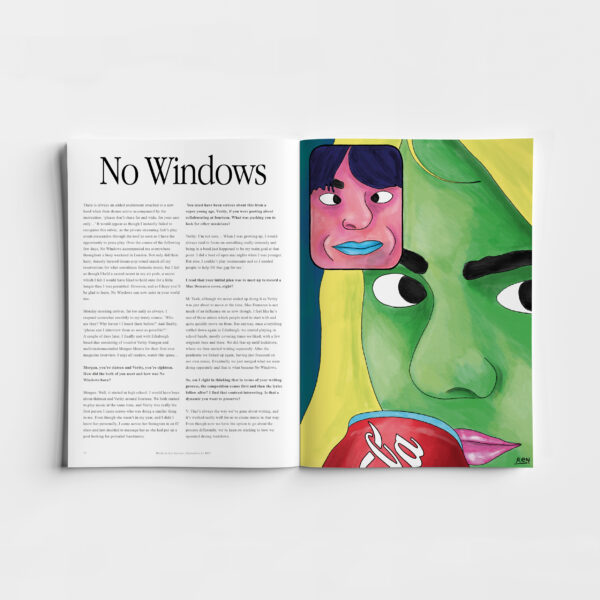 No Windows in Issue Forty of So Young. Illustration by Ren.

Aside from their musical influences and long withstanding musical relationship, the pandemic era forced these two to grapple with a new creative structure which had to abandon the pre-existing physical proximity between Verity and Morgan. Instead, their music was having to be defined by the distance between the two of them, forcing instead the exploration of a newfound reliance on their own individuality, rather than the two of them collectively. The result – the music which has had such a profound effect on me. In fact, neither Verity nor Morgan seek to return to their writing method pre-covid, rather, distance has become the most productive ingredient to No Windows; each song feels isolated, distorted, and introspective.

Echoing those wonderful collaborations between Mazzy Star and Jesus and Mary Chain, No Windows’ newest release ‘No Clue (Green Song)’ is a direct product of their writing situation described above. Changing seasons and entering a new stage of life development is at the centre of this track’s DNA, highlighting those overwhelming and sometimes incredibly challenging emotions we all experienced as coming-of-age teens. At least Verity and Morgan have this beautiful song to represent such an ambiguous era.

What No Windows possess is a pre-egoistic passion for creative collaboration entirely removed from reductive, influencer status sociality that we see all too much nowadays. This duo disdains the blue tick frontperson cliché, or the danger of beaming a singular spotlight onto the chosen lead; rather, Verity and Morgan exist within No Windows through a neutral symbiosis which selects music, as opposed to social validity, as the most pertinent and perpetual element.