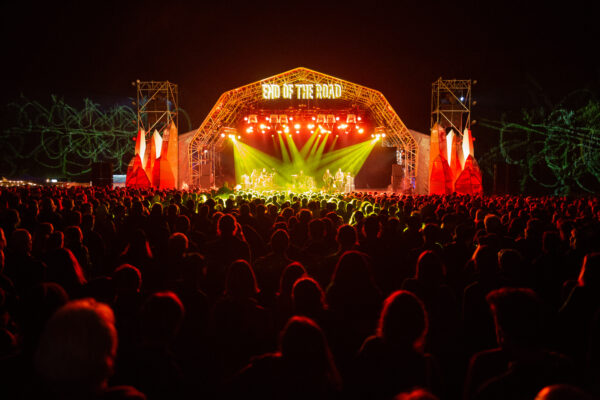 After a decade and a half in the business, there’s no denying that End of the Road has been home to some of the most magical festival moments in the country. Adored by all who attend year upon year, and overwhelmingly stunning to all debutants, there is a magnetism to what the four days of live music, art and comedy have to offer, and a meticulous attention to detail put into the curation of the event. While sadly but inevitably cancelled last summer due to you-know-what, there was a palpable eagerness among punters and bands alike to sink their collective teeth into a jam-packed weekend of festivities and frivolities, with a full spectrum of emotions to be expected from the happenings around everyone.

As campers flooded into the half-Dorset, half-Wiltshire field of dreams, Kikagaku Moyo established the mood for the festival nicely, one of the sole offerings of music from overseas in the pandemic-stricken lineup, blending psych rock and jazz delicately. Regressive Left followed with their retro grooves and blasts of synths, showing how promising an act they are in spite of only having three singles to their name to date.

Arguably the true veterans of the bill, Stereolab brought their bizarre blend of lounge and future-via-the-60s pop aesthetics, and the fact the band have an arsenal of crowd-pleasers such as ‘Brakhage’ and ‘Percolator’ brought many a smile to the thousands that flocked to their closing set of the first half-day.

Once the dust had settled on the previous day, it was time to muster up the energy to do it all over again for double the time, and if Stereolab’s absurdist antics the night before left you wanting something even more outré, you’d have found yourself in front of Mermaid Chunky on Friday morning, an enchanting duo from Stroud that incorporate as much looped chanting and saxophone as they do the entire Early Learning Centre catalogue.

Hometown compatriot Katy J Pearson may have won the most hearts of the weekend. Her effervescent charm and spellbinding songwriting lured many in for not one but two performances over the weekend, wrapping so many around her finger. Songs such as ‘Take Back the Radio’ and ‘Fix Me Up’ have all the hallmarks of festival anthems already, and it feels as though playing out in the countryside is where Katy truly belongs. This is still only the beginning for her, but the beginning of a surely meteoric rise. 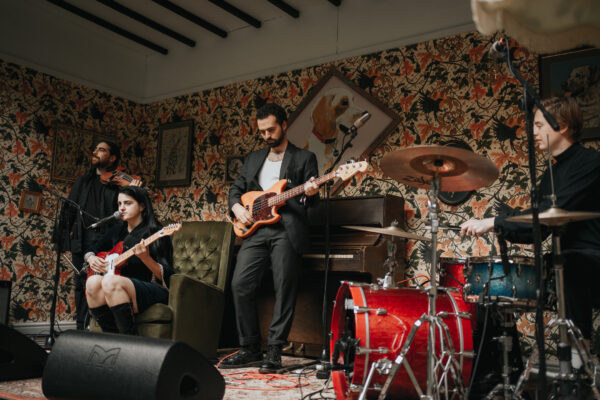 Considering they only have two singles in the wild, there’s an awful lot of depth to the music of Modern Woman, incredibly reminiscent of the more visceral moments of PJ Harvey, with stabs of violin laid over post-punk basslines. Further into the afternoon were the likes of Just Mustard, who committed their walls of noise to the Big Top, complete with hushed vocals that reverberated around the tent. Completing the afternoon was a true voyage into the psychedelic from Vanishing Twin, perhaps wielding some of the most accomplished musicians on display over the weekend; their wares displaying a concoction motoric rhythms that fused into jazz at sharp turns to deliver a mid-afternoon odyssey.

Special guest Damon Albarn may not have raised the spirits to even dizzier heights, playing largely deep cuts from his solo catalogue plus material released under his The Good, The Bad and The Queen moniker, but over an extensive 75 minute set, some crowd pleasers from Blur and Gorillaz days such as ‘Out of Time’, ‘This is a Low’ and ‘On Melancholy Hill’ found their way into the Larmer Tree fields – and the wizened Albarn shared many laughs and stories about an illustrious career. 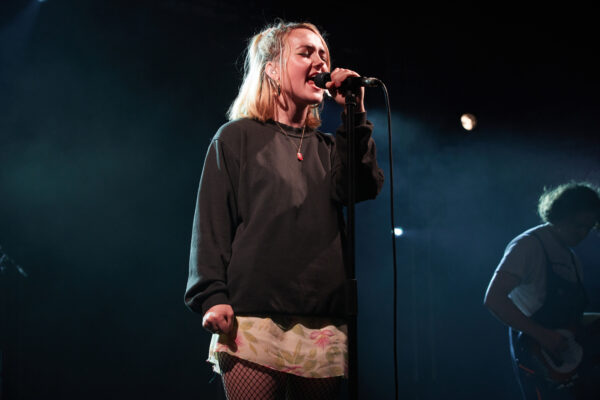 It was fair to say that the main plaudits of the day went to Hot Chip, who (if it was previously in doubt) staked their rightful claim as the ultimate festival headliners. When you think you’ve heard every hit they have to offer, they’ll continue to pull more from their sleeves, not least unexpectedly riotous covers of Beastie Boys hit ‘Sabotage’. The spectacle put on from a septet of consummate professionals wowed all in attendance, with ‘Over and Over’ perhaps contributing to the greatest scenes of chaos seen all evening.

Heading further into the night the crowds were treated to some delightfully lubberly sleaze-rock courtesy of Clams Baker Jr and co, aka Warmduscher, as the bouncing bassline of ‘Midnight Dipper’ was left rolling around in its own filth in everyone’s heads for the rest of the weekend. Japanese noise wizards Bo Ningen closed the procession for a gargantuan first full day with a jolting set – if you thought you were nodding off at the tender time of 1:30am then you thought wrong.

After rapturous response at Green Man, Welsh troubadours Melin Melyn came up for a Saturday midday showing with their quixotic approach to surf, donning frills, old man masks and (sadly) the only lap steel guitar of the weekend, a blistering start to beckon the bleary-eyed out of bed. The rushing from stage to stage began early, catching a slither of Pozi’s set which seemed to pelt everything a three-piece could at the audience. Triple the amount were on stage for Austrian-British act The Umlauts, a set that stood separate from a lot of other things witnessed, compressing electronica, dub and punk into half a dozen tracks to stomp along to.

By some distance, caroline produced the most enthralling set of the weekend. Every temptation to edge towards a dramatic crescendo was quashed by a delicate fall back down to a soothing state of bliss. Only four tracks are played in their set, but each felt like a journey of its own, allowing the listener to find ample time to contemplate the beauty and solace of their music. The closing one-two of ‘Skydiving onto the library roof’ and ‘Dark blue’ alone were enough to make a grown man weep, and while the overall feeling of the set may not have been one of overwhelming joy, its splendour was to be revelled in and can only be described as a life-affirming experience.

If caroline did prove to be too sombre an affair, the hedonistic party that is Lazarus Kane dispelled any of the seriousness with a high energy set of songs from new EP ‘Psychobabble’ plus old favourites, demonstrating that their journey into a new era of the project is sure to be a fruitful one. 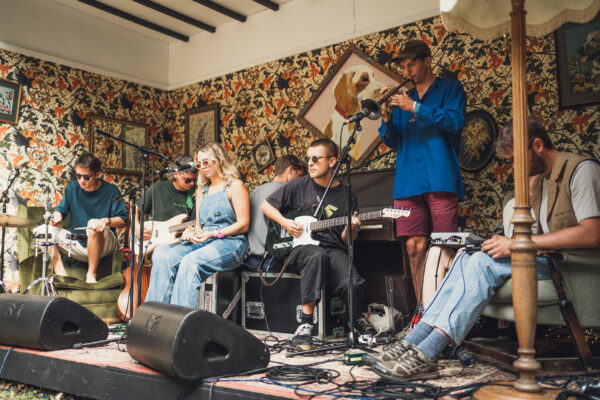 Field Music followed next, with the knotty art-rock of Sunderland’s Brewis brothers echoing out across the main stage mid-afternoon. While much of the day until now had been dedicated to up and coming acts that were set on luring in new fans, Field Music already had eight albums’ worth of material to rifle through, their peculiar time signatures confounding those who had mustered up enough energy to kickstart the early evening by moving about.

Perhaps one of the most eagerly hyped-up performances of the festival was sure to be Squid, who in the wake of releasing debut album ‘Bright Green Field’ earlier this year have only appeared to go from strength to strength. They may not have produced the rip-roaring set many have become accustomed to, but instead they demonstrated the growth of the band with extended jams and ambient interludes locking songs together. Wherever they’re going next, the band are evidently enjoying themselves, not least acknowledged by drummer Ollie Judge who expressed his immense gratitude to the festival for allowing them to be here, a sentiment felt across all at the Garden Stage. 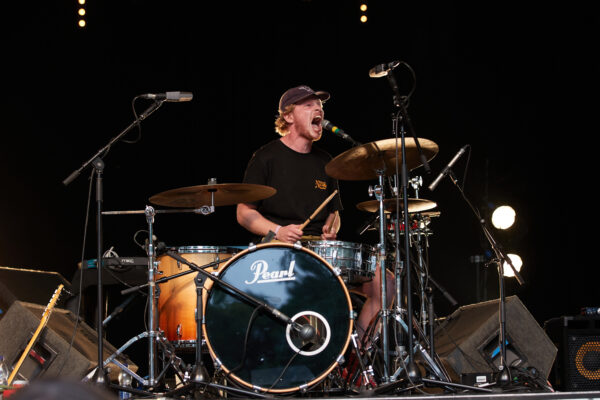 If Field Music and Squid weren’t complex enough, Anna Meredith was on hand afterwards to blow some tiny minds, offering a heady mix of neo-classical arrangements and art pop, complete with all the honks and rasps of tubas and clarinets.

For the third headline act of the weekend, Sleaford Mods delivered their trademark acerbic tirade against all aspects of UK society, absolutely no holds barred. It did look a little lonely for Jason Williamson and Andrew Fearn up on the gargantuan Woods Stage, and while their best efforts to rile up the crowds eventually worked, it could be said that the usual clientele of the festival weren’t quite accustomed to the idea of seeing a headliner without a full band behind them 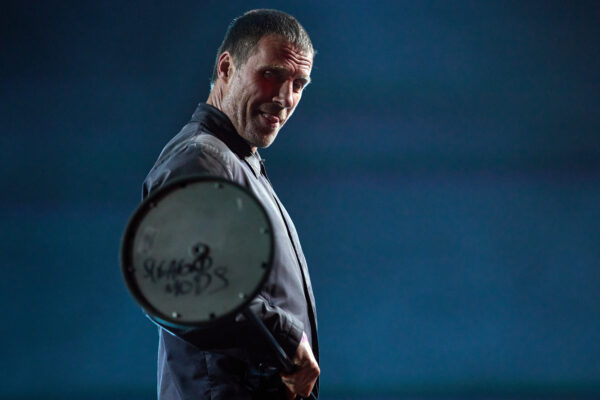 In the most passion-filled display of the weekend, Anna B Savage started off a sweltering Sunday with an engrossing set of folk-tinged storytelling, immaculately controlled from start to finish with moments of whispers following roaring crescendos. Conversely, JOHN (TIMESTWO) spent their morning blasting through half an hour of punk rippers, the pummelling drums of one John colliding with the searing guitars of his fellow John.

The fun truly started with PVA’s set, an eclectic showcase of the London trio’s disco-punk. While still relatively new to the world and making their debut at the festival, the tightly-locked grooves and high energy gave the impression that they’re more than just a group of newcomers, they’re a well-oiled machine set to make their mark for years to come. 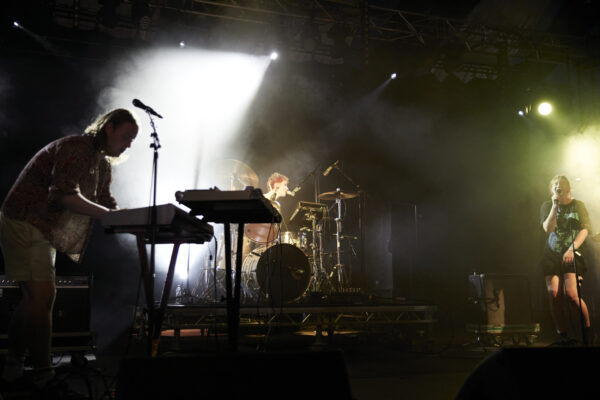 Sunday’s clash of the titans came at the midway point, and while there was a substantial crowd flocking towards Black Country, New Road, there was another 28-limbed beast ready to challenge them in the shape of Crack Cloud. The Canadian collective have quietly charmed their way into the conscience of many here in the UK, with an electrifying brand of jagged post-punk played largely at a hundred miles per hour. Their quirks and eccentricities land somewhere between those of Wire and Magazine, with flashes of inspiration coming from afrobeat and hip-hop, making for a frenzied showing that included the jarring ‘Image Craft’ to the bizarre new-wave inspired ‘Ouster Stew’. Certainly a highlight of the weekend for those that fought off the urge to catch something else.

In something of a left turn for the festival, Little Simz dazzled in the sub-headline slot, and in spite of having released her new album ‘Sometimes I Might Be Introvert’ earlier that weekend, the mix of new cuts and hits from her previous releases impressed the hordes at a festival that typically favours guitar-oriented music. It could have been seen as a risk, but was ultimately one that paid off supremely well. 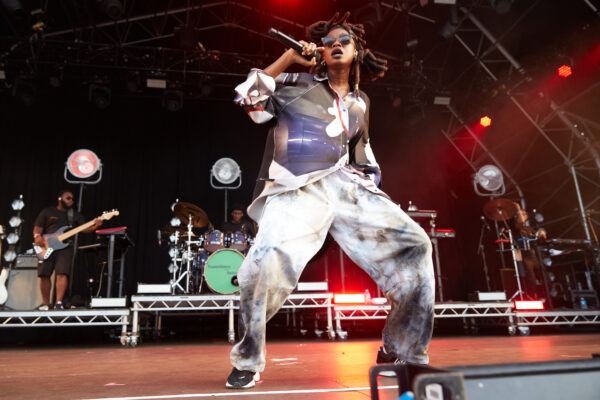 Reverting back to the bread and butter of the festival, Dry Cleaning were sandwiched between the top two slots over at the Big Top, and were on top form with their propulsive rhythms and sardonic sense of humour. The thuds of ‘Sit Down Meal’ and wailing guitars of ‘Unsmart Lady’ to open carried fans all the way to the ending with ‘Scratchcard Lanyard’ in a set that demonstrated the ever-increasing potential of one of the country’s most talked about acts.

To end proceedings on the main stage was the indomitable force of King Krule, with bleak soundscapes being punctuated by outbursts of pure emotion. For what was certainly a rollercoaster of a weekend, songwriter Archy Marshall gave everything to encapsulate all the sadness of the time spent away from loved ones, and dashed it with moments of joy. 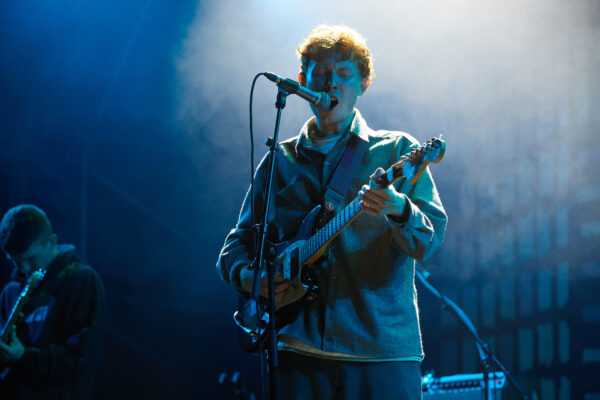 For all of the frantic chops and changes, the losses of acts and touch and go state of proceedings ever going ahead, it still didn’t seem as though a festival with such a fond eye for the finer details would miss a trick, and for their fifteenth edition, End of the Road fired on all cylinders to produce a spectacle fit to cap off the summer. How great it feels to have walked on this hallowed ground again – five stars, forever and always.