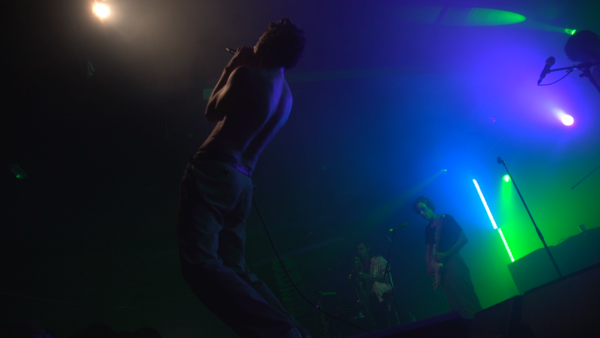 South London sweethearts, Fat White Family are used to four-night benders. As reputations go, this group have scuzz sorted and yet, it wouldn’t be unfaithful to say that if spree’s were a sport they wouldn’t come first in line (because they’d be otherwise occupied at Brixton’s Spoons). But, marks would be made, stragglers picked-up and ostentations aroused all before the first call of cowbell.

In-scene loyalties aside, no one could’ve been prepared for this level of chaotic consistency as the six-piece moved into their spaciest of squats: Hackney’s Evolutionary Arts Centre, EartH for a long weekend of dirty rock n roll. Having released album number three earlier this year, (‘Serfs Up!’ Via Domino) this group have gappy-gore-groove in their stride. Audience chat was kept to a school-boy polite minimum but then, when you’re Mark E. Smith is there really anything else left to say for yourself?

Not even five minutes in and shirts were strewn off in all directions revealing sweaty ribbed-flesh from audience and frontman Lias Saoudi a-like. This was a night for mis-fitted, ugly unification of the consummate kind. Recent single ‘Feet’ was so un-godly divine in its soul releasing survivalist it felt like stepping into a cult-ed choir of chaos in which we were all now responsible for the maintaining of euphoria and of which, we never want to leave.

Weirdly charming, sexy and, undoubtedly gleamingly- gluttonous, it was a night of back-to-back wise-up’s, a shit load of Hits Hits Hits and not much need for else. Before leathery fondling was even mentioned, we all knew what we were in for; lulling in with slow firer ‘Auto Neutron’ straight into all the good stuff and right through ‘til the ‘Whitest Boy On The Beach’ chanting end . Alex White on sax proved that yes, you can grease a mullet without an Aussie accent and yes, you will get away with it too when you’re in a band whose legacy is as un-kempt as it is looked after.

A gang with many-a-foe but a city of supporters to call on in times of collaboration, Baxter Dury did not make an appearance despite opportune environments. It didn’t matter; majority of the crowd could’ve easily been him anyway.