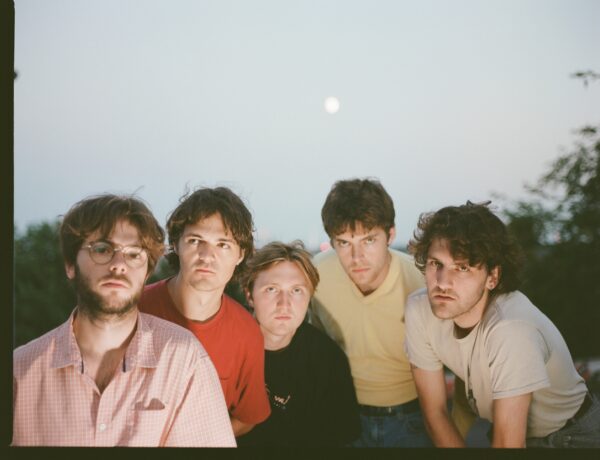 FEET introduce us to their latest single ‘Can’t Get In’; an instant hit among guitar music enthusiasts who similarly manage to lock themselves out of their flat regularly after a night out.

The next time I climb my recycling bin, propel myself onto the first-floor window-ledge, and knock on my flatmate’s window from the outside, at least I’ll know I’m not the only idiot in London conducting this dangerous manoeuvre. An operation which FEET like to describe as “that little dance with survival”. Perhaps a much too glorified description for a slightly pissed, slurring and stumbling 4am window-knocker?As the band themselves declare: ‘our release hiatus is finally over.’ Although FEET may not have been hot on our release radars over the last year (since their EP ‘Walking Machine’) the band have been anything but dormant.

Since the pandemic, five-piece FEET have all been living under the same roof in North London, a space which although has proven to be challenging at times, has also been responsible for the orchestration of their most powerful music yet. FEET tell us that “the energy from this period has been channelled and directed into the band’s newest form, and into a sound that we feel reflects our dedication to making something raw, that truly represents us as people, an identity.” In this new single, the band’s narration of such a quintessential, mid-twenties narrative doesn’t operate to distance musician from audience, but seeks to synergize both; allowing us to function in the same space as the music which we listen to.

Despite the plethora of live dates and festival appearances, FEET were able to spend a large part of 2022 in the studio with Jon McMullen (Wet Leg, Michael Kiwanuka) to work towards their second album. For the band, the covid interruption has proved to be a productive obstacle, forcing them to carefully consider the importance of identity and a focussed musical sensibility. Indeed, a new manifesto was devised during this period which pertained to the vitality of brotherhood, collaboration, and productivity. And perhaps most importantly, an explosion of renewed energy. Jeremy and Super Hans’ ‘Big Beat Manifesto’ can eat its heart out… ‘Can’t Get In’ is an instant hit.