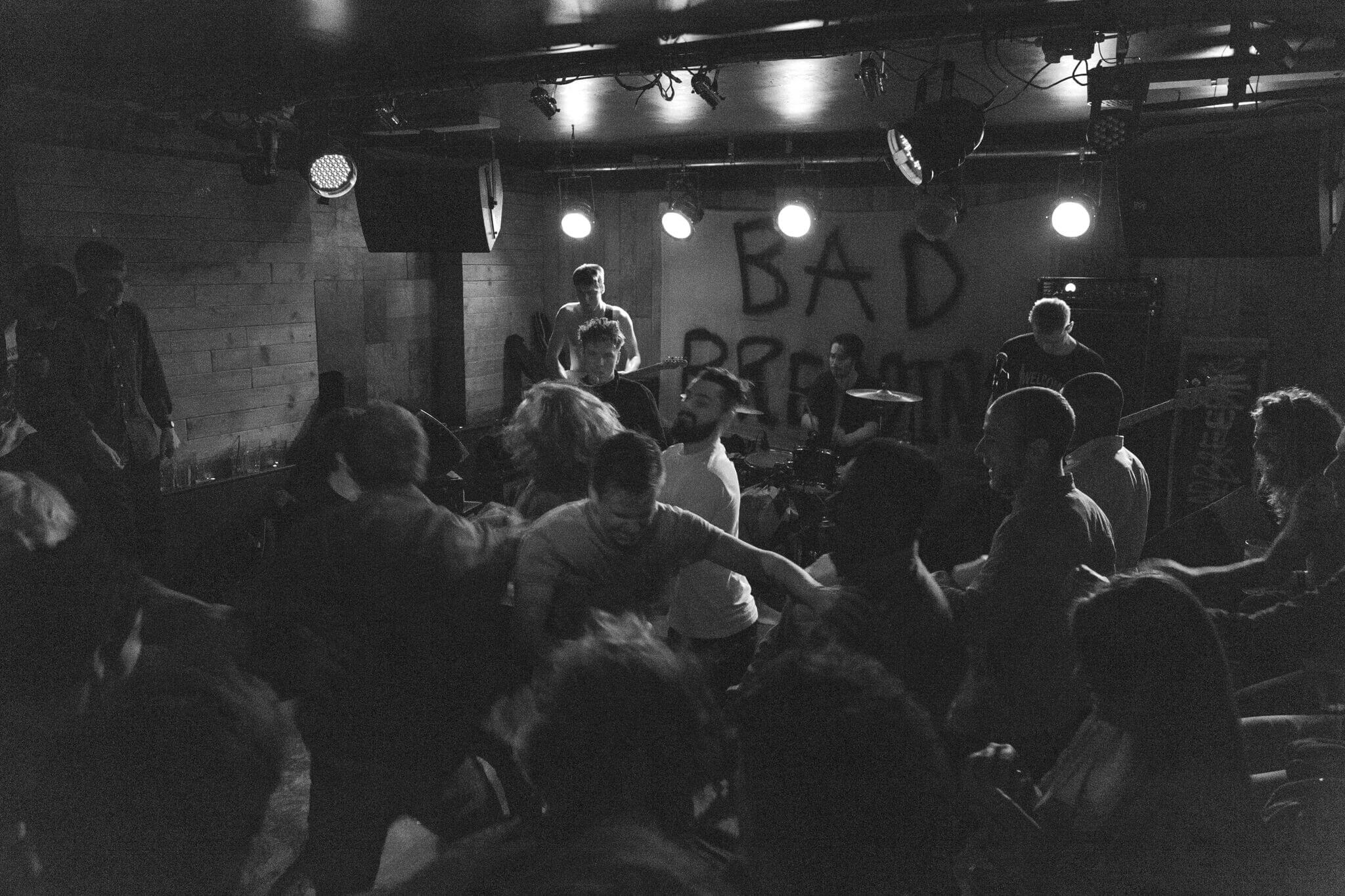 Bad Breeding have been releasing their music and spreading their word since 2014. In a year where buzzy guitar music centred around ‘dream pop’, the Stevenage four piece woke us up with some angry yet thoughtful realism. Since then, the band have released two albums and now they are returning once again with their ‘Abandonment’ EP, which they are releasing with One Little Indian.  The title track was released a couple of weeks back, addressing the gap between the young and old. Today, we are proud to bring you the second, ‘Psychic Copper’. The song holds the intensity that you’d expect from one of the UKs most important bands but its content stays close to home. Frontman Christopher Dodd explains “it’s an exploration of the development of a toxic masculine agenda in Stevenage” and goes on to add ” In some ways I was writing about the failures of men in my childhood, as well as my own experiences trying to grapple with identity throughout my teenage years”. Bad Breeding are one of the countries most important voices, they’re unafraid to look in as well as out when addressing the worlds problems. In a time where punk can be a fashion, Bad Breeding bring substance. Listen to ‘Psychic Copper’ and read our full length interview with the band below.

Hello again Bad Breeding, It’s great to hear new music from you. You’re releasing the new EP with One Little Indian, can you tell us how that relationship formed?

Derek has been into Bad Breeding since we put out the self-titled record in 2016. There’s a long-held admiration of Flux of Pink Indians and Spiderleg Records in the band too. We’ve always wanted to carry on extending the conversations we try to have with the songs and working with One Little Indian for an EP feels like a constructive way of doing that. One Little Indian were also sensitive in allowing us to keep our autonomy on how things were distributed and made accessible from our end.

The way I’ve always seen you is that you create your music for yourselves first. More for a sense of relief than for recognition or sales. Is that a fair view? What do you get personally from the music you make?

Crushing bouts of insecurity and self-doubt. Nah, in all honesty, I think that’s a pretty fair summation that we’re reaching for something more cathartic. We formed the band as a way of expressing emotions that were difficult to convey at work or in our personal lives. We found that a lot of artistic conversations that directly related to us were being led by opportunistic forms of media that had no direct or lived experience with the subject matter. Working-class identity in wider media was often put through this prism of either slapstick comedy or poverty tourism. The goal has never been to naively think that we can consistently provide a viable alternative to those portrayals at large, but it’s always felt important to at least try to have our own conversations and representation when it comes to discussing class and our community.

Today we are showing ‘Psychic Copper’ to the world. Can you tell us about the song and perhaps its subject matter?

The song makes reference to the work of Robert Bly and the writing around the mythopoetic men’s movement. That’s where the direct reference to Psychic Copper came from. Really it’s an exploration of the development of a toxic masculine agenda in Stevenage. Lyrically it’s a collage of some of the arguments, absurd defences and problematic notions that have somehow held water here. It looks at the community’s reluctance to discuss male victimhood and the more violent results of accepted masculine identity in the town. In some ways I was writing about the failures of men in my childhood, as well as my own experiences trying to grapple with identity throughout my teenage years.

We’ve seen a rise in politically charged music in recent years, but you might say that most has been for show. Do you think there’s been a lack of real message and anger in those getting the credit? Do you feel that bands have any real power to make a change?

It’s entirely dependent on where you look. There are still a lot of important conversations being progressed by artists, but you’re unlikely to find them outside of more subversive discussions. I would agree that the idea of protest has been commodified, but that hasn’t only been confined to music either. We exist in a context that has continually prized the individual above collective good so the appropriation of movements is more likely to end up only one way – commodified for individual gain.

I think when we sometimes discuss the idea of “change” the picture often shifts towards this image of grand, immediate transformation. I’m not sure that’s possible solely through music, but what artists do have the ability to do is influence and colour the social fabric. Having a go at writing and making songs has the ability to develop conversations between people, in communities, and that’s something that has always been an important driver for me when writing lyrics. It doesn’t concern me too much whether people like it or not, or whether they agree or disagree, it’s more about engaging discussion. In terms of credit, on a personal level that doesn’t really interest me. I’m more concerned with finding an outlet to represent myself. What we need to be careful of when talking about the idea of things being for “show”, is that we aren’t moving to deny people their own experience of things. Culturally we suffer from excluding people from conversations enough as it is and I’d always want to encourage everyone to put forward an argument and allow people to make up their own minds. If you wade through enough shit you soon get a pretty decent nose for it.

Do any new bands or artists inspire you?

Yeah there is plenty of important stuff out there, although it’d be different for each of us. For me, Uniform put out a vital record last year, while Exit Order’s last LP was excellent too. Obviously Paco does an incredible job supporting artists and releasing great records on La Vida Es Un Mus. Evie Wyld’s All the Birds, Singing is my favourite (new-ish) thing that I’ve read in a while. Max Porter’s Grief is the Thing with Feathers was first printed a couple of years back and that stuck with me throughout 2017 too.

You’re next headline is on May 1st for International Workers Day, is this cause close to your heart? Are you always keen to give your working class roots a platform and a voice?

Yeah I think the day holds particular significance to our families and the occupations that supported us when we were younger. It’s tended be set in a more international context, but I think we’d benefit from paying more attention to our current labour struggle in the UK at the moment. You only have to look at that the stories on the supposed Whitehall impact assessment that reportedly suggested a post-Brexit scenario could allow for “maximising regulatory opportunities” by manipulating workers’ protections. The Government has continuously insisted that it plans to strengthen workers’ rights after we leave, but there has been no real obvious backing for safeguarding the protection of working hours as they are. Beyond that, you don’t have to look far to see or experience the continued destruction and manipulation of working-class communities at the mercy of punitive policy.

In terms of the fundraiser itself, we’ll be trying to raise some cash for People for People – Stevenage, a group that helps to provide assistance and relief for struggling members of our local community. It does all sorts of incredible work from sourcing and delivering donations to providing people-power or particular skills to help those who don’t usually have access.

What can we look forward to from Bad Breeding for the rest of 2018?

We’re working on something more longer form to follow up from Divide so hopefully we’ll get to record that at some point this year. Work-permitting, we’ll get back over to Europe for another tour later in the year too.