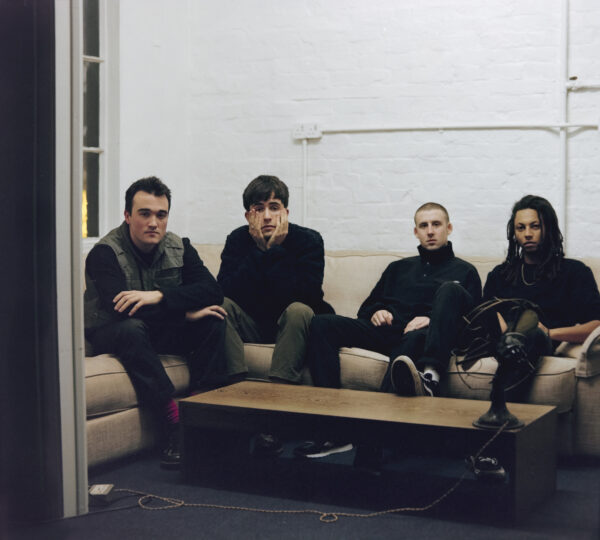 Folly Groups’ debut single proper, ‘Four Wheel Drive’ comes as they join forces with So Young Records to be the first band released on the crisp, fresh books of the recently formed label.

To recap, Folly Group have thus far released a pair of tracks that were encapsulated in devious rhythms and direct lyricism, gaining the group a loyal following; resulting in lockdown live streams, a slot on Live At The Windmill and twenty-odd tour dates nicely lined up for later this year. Opting to refer to themselves as a ‘collective’ rather than your traditional ‘band’, striking up and balancing (or blurring) the work-home-life ratio perfectly. It feels like an experimental phase gone right and they’re as ‘together’ as they come with ‘Four Wheel Drive’ proof enough they’re revelling in this new venture and thriving tenfold.

The single opens to a mesmeric and somewhat psychedelic guitar hook that lures in the listener for four minutes of choppy and velvet vocals flaunted on a backdrop of atmospheric chaos that’s aching to be heard live. Embodying everything you’ve come to love so far and more, the single is doused in explorative clanks and ambiguous sounds that wouldn’t go amiss in the waste paper basket scenes of Richard Brautigans’ Sombrero Fallout. Speaking about the single, Folly Group’s frontman and drummer Sean Harper said: “‘Four Wheel Drive’s mechanical chug aims to invoke the feeling of alchemy that occurs when we make music together. It’s a kind of sonic metaphor for our each being part of an engine—together, we each provide a different service in pursuit of the same goal. That goal is whatever kind of good it makes you feel.”

‘Four Wheel Drive’ seals the unique and thrifty style Folly Group possess; all that’s left to do is take it upon yourselves to bask in a musical interlude, and listen.