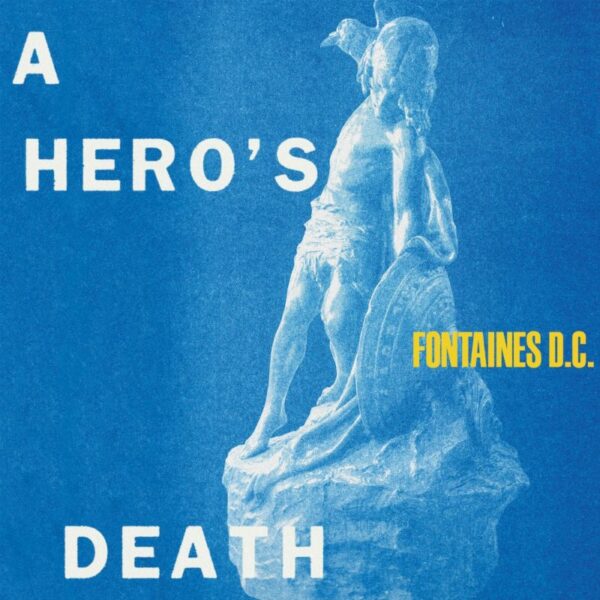 In the world’s broad field of battle,
In the bivouac of Life,
Be not like dumb, driven cattle!
Be a hero in the strife!

Henry Wadsworth Longfellow sang across the page of ‘A Psalm of Life’, urging for life to simply be led at its fullest than lived for its material need and existentially woe’d upon as its happening. We spend our lives even driving to find our place within it – our mark in the sand, the thing that makes us who we are. But what happens when you think you’ve found your mark, but it unsettles you from all that you’ve known before?

‘A Hero’s Death’ – the second record from Fontaines D.C. – is naturally burdened by experience, yet in doing so is an eviscerating introspective on displacement, perception of the future and reconnecting with the self. Grian Chatten, focusing his spectatorial lens upon himself, channels the exhaustion and absence of habitual fulfilment into an even dryer, intense form of narrative – scraps of memories transcend into capitalised feelings that are coaxed into understanding through their blossoming personification in song.

Chatten burrows into expected perception of others – leaving himself with a hanging finality that yearns rather for a sense of silence than the constant sense of acceptance that lacks any sense of individuality – “We both Have a lot of things to say, don’t – Don’t get time enough to play” he notions laconically across ‘You Said’, his macabre drawl –  drunkenly anaesthetised and surrounded with the constant fawn of affirmation – doesn’t know whether to yearn for home when it doesn’t offer the same residual comforts as it did before – having been gone for so long, a heavily resonating hunch of habitual and social limbo. ‘Sunny’ – manifesting an alternate life, like a blur of a flashback within in a protagonist’s mind, where Chatten can’t decipher between a dream or reality – broods nonchalantly over beautifully aching strings, a sixties noir developing within the adolescent anxiety of not knowing what your future beholds. It’s a stark and poignant moment, one that allows Fontaines to acquire understanding in their own knotty, entwined way.

The immediacy within which they capture the passing of time lies heavily within the urging, desirous atmosphere they craft – a weighted, ponderous mood that only loosens its temperament when vitally necessary. ‘Televised Mind’, in all its urgency, is most deviant and striking in its low strung notoriety, Conor Deegan, Conor Curley and Carlos O’Connell presenting this gift of driven enthusiasm and angst to bely the insecurity and anxiety that lurks within – a sonic evocation of indoctrination through accessibility. Their sound has always possessed such stringent purpose, but across ‘A Hero’s Death’ the layers are allowed to wallow in their disposition, a more incisive say in the matter than a product of the narrative that colours the world they inhabit. It bleeds across ‘Love Is The Main Thing’, a sticky hue that concretises Chatten’s direct vision with minimalism that creeps upon you, eventually encapsulated by its vines as you lay dormant within its weariness.

‘Oh Such A Spring’, beautifully crafted upon weary nostalgia and a tangled sense of calm, Chatten gleams bleary eyed, hanging on to that last string of reticence that clutches with bleeding hand, “Now they’re all gone, that’s life moving on, some stayed behind to get drunk on the song” – as much as we may not want it, you the city can most certainly be taken out of the boy – and it’s here they show their understanding and adaptation, their place within a world that keeps on changing. ‘I Was Not Born’, with its flagrant stomping march that awakes like a jolt from the recesses of residual paralysis – Chatten defiant and uncompromising – is ready to take on the future with both hands, once again only on their terms.

‘A Hero’s Death’, is a striking progression for Fontaines D.C. – filled with the life and character that breathed through their debut but with striking and insightful apprehension of ageing and growth.