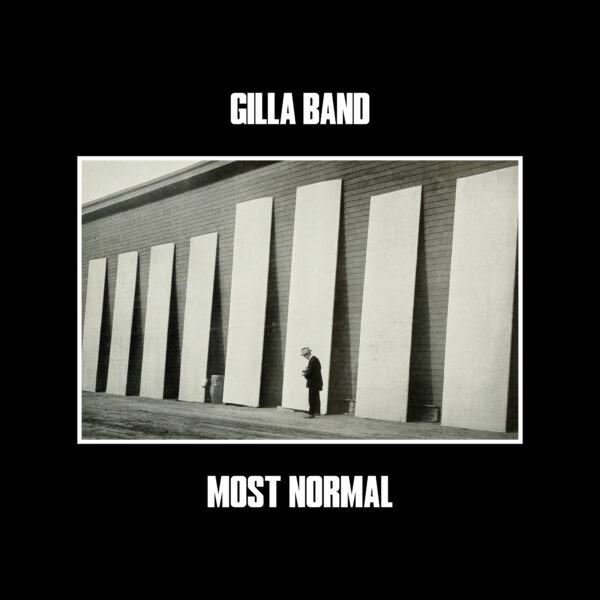 When Gilla Band first barged their way into the music scene with 2012’s ‘In My Head’, they inflicted onto the world their genius hailstorms of electronic-infused white noise, crackling with rhythms shaped like obscure half-gods and sounds that go through the muscles and arrive out of a hallucinatory logic, inflated, segmented, distorted into a sound that seems to hover in place even as it charges forward. After signing with Rough Trade in 2015, they released their first album ‘Holding Hands with Jamie’, following that up in 2019 with ‘The Talkies’, gaining them devoted live followings as they toured the albums across their home country of Ireland and the rest of the UK.

Their new album ‘Most Normal’ brims with righteous anger and uncompromising joy. It is two opposing forces at once: across maps of dusty, thick-bottomed loops and warmly truncated fuzz, it oscillates between spit-in-your-face rage and other-worldly indifference. Frontman Dara Kiely’s lyrics are filtered through a punctured soul, less singing and more letting the air out, speaking in tongues from a tasteless wasteland, “I was queuing at sockets…” he forces through a wall of tinnitus-inducing sound on the album’s opening track ‘The Gum’. What ensues is the bones of a great pop album being swallowed by industrial-noise—shredding itself into ribbons of panicked, scrambling anthems for a new age of noise.

‘Most Normal’ was born out of Gilla Band purposefully shaking up their process in the wake of COVID-19. Without a live stage, they had time to stew their songs into leaner, more stylised, and layered tracks. ‘Gushie’ and ‘The Weirds’, in particular, fizz with the same mysterious aura of a forgotten dream, that obscure feeling you’re left with when waking up to a liquid dawn. It is beautiful bruised music, something tender then twisted and abused into something angular, muscular with shuffling drums that echo a masochistic paranoia, and a rock-hard sonic barrier that is fury and sickness. I’ve heard them described before as dangerous, like one last rave before the apocalypse, but through the waves of distortion, you always get the sense that Gilla Band are searching for the nuance of noise, the order within chaos.

Because, in a roundabout way, the distortion of Gilla Band’s pulp-pop has an earthy feel to it. Somehow, by feeding very inhuman sounds into a machine, they are spat back out sounding even more grounded. This is heard in tracks like ‘Backwash’ and ‘I Was Away’, where the lyrics also reach their apotheosis of nonsense. In ‘Backwash’, Dara forays into the irrational and insoluble, mimicking the dreamlike strata of the half-lucid mind, singing “His nose acts like a toe/And anytime his watch would die/He trip over himself/Hello/He went to the sink and put Vaseline on a trout/Hello” before a tsunami of noise absorbs his voice like the paroxysm of a dying brain. Everything is beautiful and pulsating with stress, like the ectopic war cry of the deranged: it plays like a hit of DMT shooting you out of your experience into a realm beyond senses, beyond rationality, beyond explanation.

Standing apart from the moral acupuncture of a lot of the new post-punk canon, Gilla Band have always sounded so comfortable being crushed by their own excesses. ‘Most Normal’ feels like a natural progression, in that sense—bringing their sounds to their breaking point and gleefully watching as it’s crunched into something wholly new and unheard of before. It’s this taste (the influences on ‘Most Normal’ range from old-school electronic, to the ply of modern hip-hop production, to hyperpop’s aural overdrive) that grinds Gilla Band’s sound down to what I could only describe as lullabies for the ambitious. When a sound ‘clips’, it is the result of the amplifier attempting to deliver an output voltage or current beyond its maximum capability. Gilla Band, beautifully, never seem to know where that ‘maximum capability’ is. They just keep pushing, and ‘Most Normal’ is the voltage turned up just that little bit higher.

Writer, Bryson Edward Howe, interviewed the band for the website, The Big Ship. Check it out here.

‘Most Normal’ is out now via Rough Trade Records.

Issue Thirty-Nine of So Young is out now featuring Sorry, Alex G, Crack Cloud, The Big Moon, The Lounge Society, Been Stellar, Maruja, Comfort, Cowboyy, C Turtle and more. Order your print copy here or read the digital edition below.