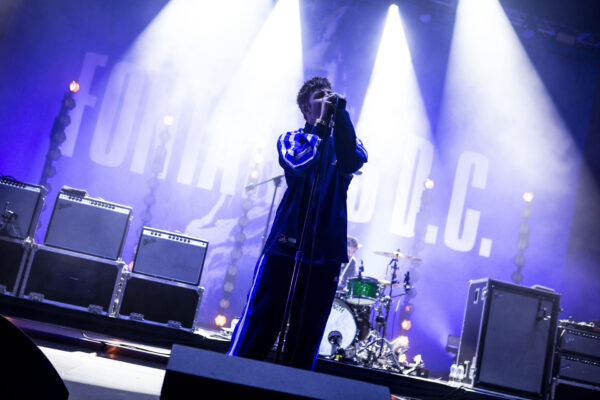 If you were to stop and ask any Festival go-er the reason why they trope through National Express carriages, fields, and the ever-dreaded inevitability of rain in the name of rock n roll and good vibrations, guaranteed, you’ll be met with a flurry of answers which all stem down to the same intrinsic values: we do it to let go, reignite, and re-immerse in an industry that refuses to lose its spark.

Despite the obvious, Green Man 2021 was not too dissimilar to Green Man’s of years gone by; in that its line-up remained to be at an impeccable standard of finely-curated goodness, and environmental magic. Nestled peacefully in the concave arms of South Wales’ Brecon Beacons, this 25,000-cap festival of peace, love and creative-abundance was four-days worth of welcomed fresh air, after 18 months of musky stagnancy.

As with all good festival line-up’s, part of Green Man’s charm is its unanimous encouragement of ‘new-music discovery’, and the championing of tomorrow’s stars. Their ‘Rising Stage’, a charmingly sloping tent, positioned confidently to the left of the main-stage, is a tastemaker’s god-send, with acts ranging from Manchester’s Indie-sweethearts The Goa Express, to the wittily acerbic deviousness of Do Nothing. 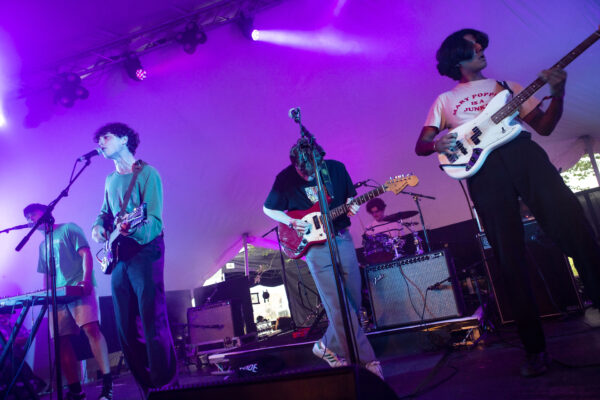 Friday night’s stars on the aforementioned stage came in the form of Egyptian Blue; a group who, having released their sophomore EP in the primary days of lockdown, carried the rage of someone (or rather someone’s) yearning to set themselves, the crowd, and any passers-by free in a furious display of Post-Punk dissatisfaction, and tailoring far too sharp, for any potential post-show rolls down the hills. Not too dissimilarly, Roscoe Roscoe, who took on the challenge of headlining The Rising Stage Sunday night, are a luminary Noise-Rock quintet who perfectly demonstrated the concept of “rising” in more ways than one. Stand out number ‘Jacob’s Ladder’ was a shoe-gazey heart-stealer which soared to-near infinite amounts before breaking down into a masterclass of experimental contemporary-Psych. If your frontman has a Tim Burgess-esq bowl cut, and a voice like an angel sent straight from London’s E1 only to land in Wand’s ‘Ganglion Reef’, it would appear you can’t go wrong. 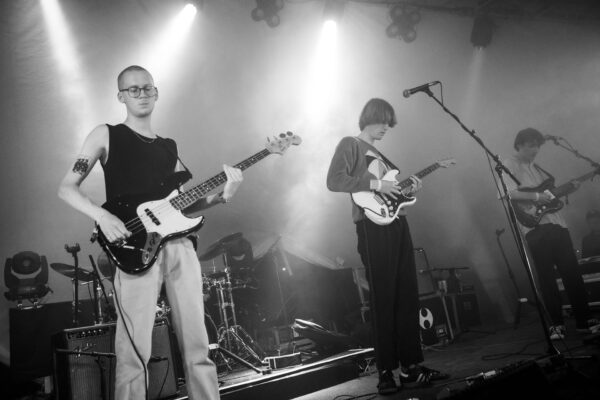 With Friday night winds and Saturday morning showers, Saturday afternoon flowered into a spectacle of Speedy Wunderground sized proportions. With 21 signees / affiliated acts performing at the festival this year alone, the South London based label effortlessly demonstrated their ever-growing fanbase throughout the DIY and festival circuits. “It feels so natural to be back: triumphant and important” notes guitarist Julian Hanson of Limerick-queen Sinead O’Brien’s band. “Performing is an expression, and for many right now this feels sacred: spirits are at an all-time high.” Be it the poetic divinity of O’Brien or, the charming youthfulness of newcomers The Lounge Society, there appeared to be no rest for the riff-fuelled-wicked and by all accounts, Speedy Wunderground and their bands of merry showstoppers were all, on top form. 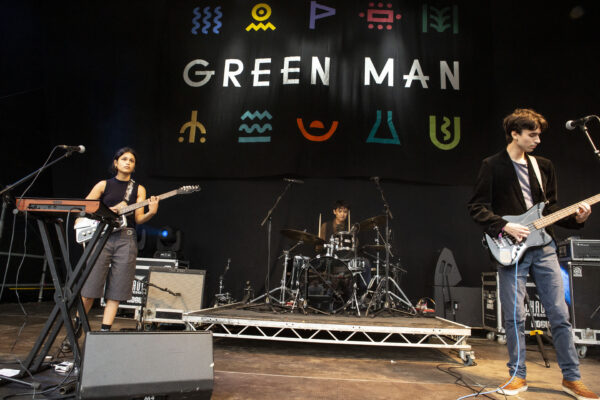 It wouldn’t be Green Man without some form of ‘not-so-secret-secret-set’ and this year, the responsibility fell into the well-versed rhythm section of  Squid, and newcomers The Monophonics; the latter of whom are a quote-on-quote “supergroup” consisting of Speedy’s very own Dan Carey, Tom Coll and Conor Curley of Fontaines D.C., Goat Girl’s Clottie Cream, and label signee DEWEY. Utilising just one string per strung-up instrument, and with some members meeting for the first time on-stage, The Monophonics were, in all their anarchic comradery and haphazard organisation, a gloriously unexpected example of how Sunday afternoon chaos is good for the soul, and how wooden boards with twenty-ish frets for thrashing can defy all conventional endeavours when put to singularly plucked use. It must also be noted that at times it was near-impossible to tell who in the packed-tent was a spectator, and who was lurking around to jump on stage at a moment’s notice – as the crowd ranged from members of PVA to Lazarus Kane, Tiña to Shame, and nearly everyone and anyone else in-between. 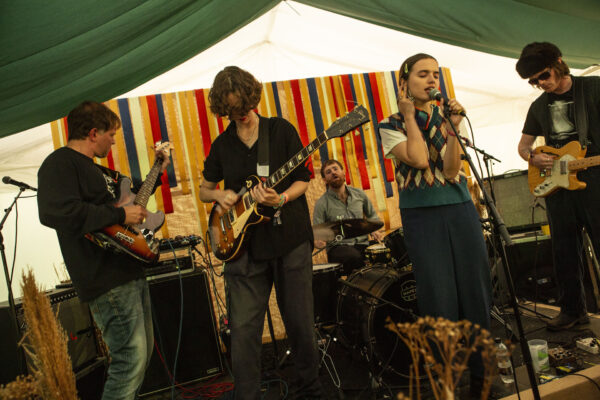 Sunday’s will always remain to be, in most parts, a scattered race to make the most of everything, ahead of the dreaded fall back to reality. For those able to leave their tents at midday in bid of some natural-re-aligning, Broadside Hacks, the favourite Folk-collective you didn’t know you needed, (with members including, but not limited to: Sorry’s Campbell Baum, Naima Bock of Goat Girl fame, Bristol’s Katy J Pearson, and Black Midi’s Morgan Simpson on drums), were the charismatic-cure to any Saturday night mis-demeanours.  With a core-premise to re-work traditional songs with no set origin, Broadside Hacks were one-part a novelty, two-halves a remedy for the weary traveller, and collectively, a collaboratively sensorial daydream. 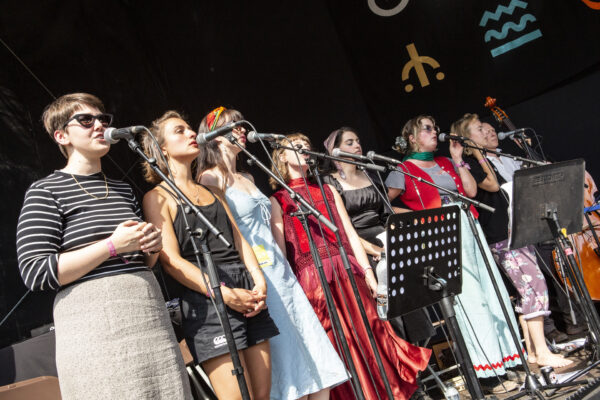 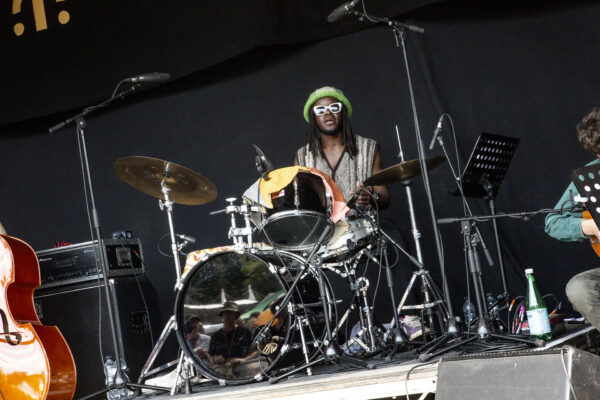 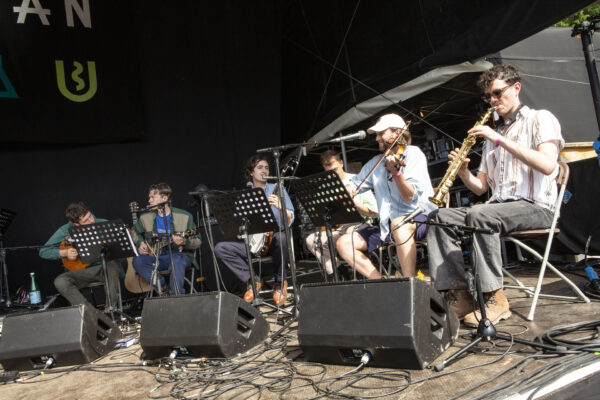 Canada’s Crack Cloud, are well and truly living in the moment. Somehow managing to cram Green Man into their fearlessly stacked UK / EU tour schedule, the self-described “Art-Punk band and multimedia collective” who were one of the only international acts at the festival, were without a shadow of a howling-cowbell, a percussionist’s-site to behold. Performing tracks off of their 2020 released record ‘Pain Olympics’, Crack Cloud dominated their bell-tent rammed set in manners that appear a near impossible-mastery, unless you’ve got an unlimited number of members, you’re shirtless, and adorned head-to-toe in ink-stained metaphors. 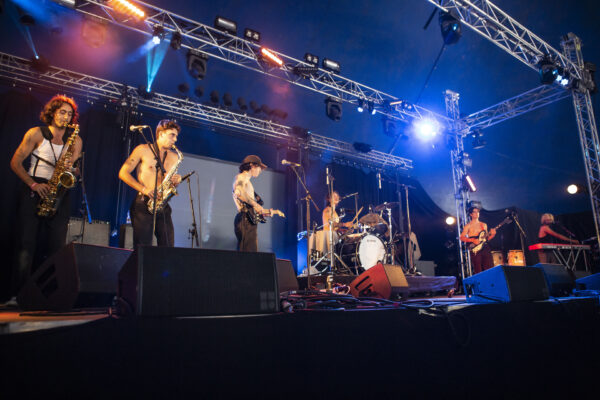 Sunday night headliners Fontaines D.C. were never not going to amaze. Taking on the main-stage post Thundercat would surely be enough to make any bassist quake, however the Dublin originating, Mercury Prize nominees took to the challenge in their ever-ascending stride; riotously churning out a meticulously well-curated set which included highlights such as ‘Televised Mind’, the atmospherically mesmerising ‘A Hero’s Death’, and all-round-favourite: ‘Boys In The Better Land’. A true statement of long-term intent, Fontaines D.C. were a charismatically victorious ending to what had been a weekend of tireless success. 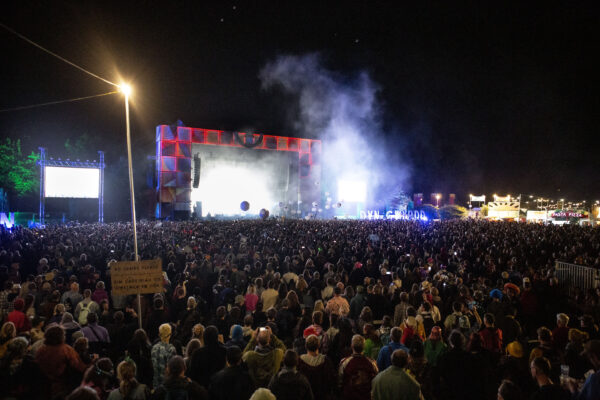 It can be hard to put into words the sentimental value a festival can hold on a person’s spirit. Be it in their present state of grassy frolicking or, in the hours, nay-minutes, spent counting down the seconds ‘til next summer’s love affair commences again, no August is complete without a couple of thousand folk roaming, drinking and dancing in unison, and Green Man is by no means an exception to the charm.