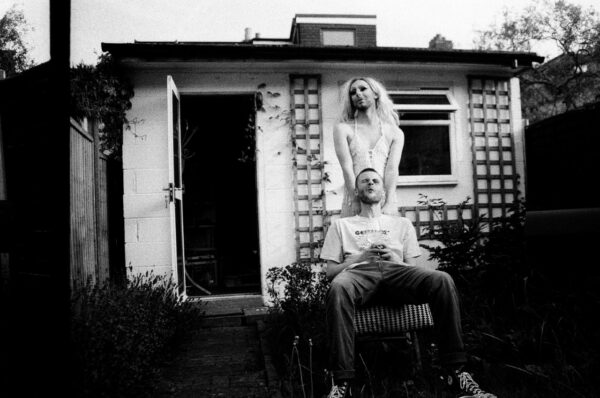 Happyness have returned! London duo Jonny Allen and Ash Kenazi have announced two intimate warm-up shows in Bristol and London before they play End of The Road Festival next month.

To celebrate the announcement of their return, the pair have shared a fifty-second snippet titled ‘(…Hey New York)’ a dry, self-depreciating ode to their American idols. Swimming in scratchy production yet reintroducing us to Allen’s instantly familiar drawl, it draws us in with its spontaneity, natural and unkempt.

We managed to sit Jonny and Ash down for a fleeting moment to discuss their sudden return:

Happyness, welcome back! Why did this feel like the right time to return?

JONNY: It didn’t! Fuck! No, we can’t wait lol. It’s been AGES. We didn’t really mean to pause for that long, but a lot of life things happened, we needed to just do some living.

ASH: By the end of our last album we needed some time to be individuals and work out what we wanted. I had just come out and was exploring life as a gay man and that affected many of my relationships, both in positive and negative ways. But Happyness has always been a really important part of how we absorb the world and I needed it to maintain some stability.

How does your new output compare to what you’ve done previously, do you feel like the personality of it is different?

JONNY: The band’s always been an extension of our personalities, so in some way it’s always going to be the same, but a lot’s changed.

ASH: Yeah, coming out changes a person and my relationships, but also what it meant to be in a band

JONNY: It definitely helped me chill out a shit-ton seeing Ash being himself and enjoying life finally ha. We wrote loads of stuff off the back of it. A lot of the songs started out as super hopeful coming out songs, or love-type songs to my then-girlfriend. And then I went through a savage break-up and a lot of them became break-up songs. Ash and her were super close too so we were both pretty confused about it for a while.

You’re returning with a couple of nice intimate live shows before playing End of The Road, it must be exciting to finally road test these new songs live?

JONNY: Oh yeah it’s super exciting, there are 5 of us live now, it’s like a police lineup. Oooh “Identity Parade” is a good band name

ASH: I’m bursting at the bladder.

Ash you’ve begun exploring drag artistry, how does it feel for you to be able to present this within Happyness?

ASH: It’s been a long journey learning to love myself and finding the confidence to bring this aspect of my personality to the band. It was something that I felt I had to keep to myself in the past because so many parts of the industry are based on heterosexual behaviours. I am so excited to share with fans what I have learnt through reclaiming my femininity. I see many challenges but feel that they need to be addressed in the industry. And who doesn’t want to tuck their junk and smash some skins?

What would you like listeners to take from your new output??

(… hey New York) comes across as a witty and self depreciating minute, what’s the feeling behind the track?

JONNY: It’s the true story of our true lives as indie-rock groupies.

Happyness play the following dates, with American reprobate Lazarus Kane in support in Bristol and London: