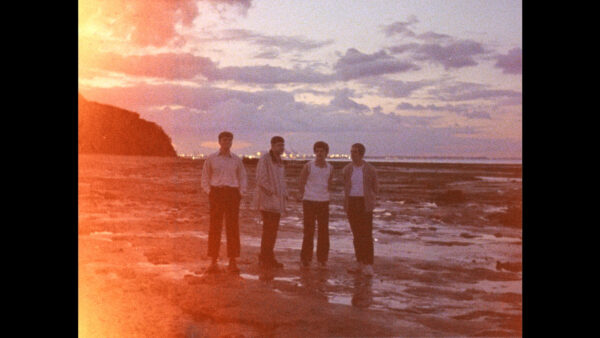 To come-of-age in a generation of age-old ideals is as timeless as it is fleeting. There’s a collective cynicism in being young, whilst paving the way forward in life yet seeking humour via tried-and-tested practises, Hotel Lux release the video for ‘Ballad Of You & I’- the closing number off of their debut EP: ‘Barstool Preaching’.

With every spun reflection, Hotel Lux continuously thrive in championing the unprecedented normality in shared experiences. Channelling tasteful joviality with all the quintessential Britishness of a well-loved Burberry jacket, their rollicking-reimagining of contemporarily fitted, archive-inspired guitar music, is designed to endure all tests of character – a fanciful statement piece from a band who really do know how to write a ballad.

Memories exist to fill visual voids but when your 35mm mindset is filled with existence-exposed blanks, and strangers fingerprints mark candid snapshots taken of someone else’s greener grass, the tender agonies of youthful jubilee seem to feel more than just a song. Get in that rusty old car and ride off with your accompanied other – whoever they may be, live a little and live a lot.

An occupied mind of questioned relationships, ‘Ballad Of You & I’ is a beautifully sincere example of getting through life simply by getting through it. Taking that first step out into the big open world, six strings in hand, band by side and actively keepin’ on, it soaks up the romance of life’s forgotten joys – like going to the cinema alone on a bleaker than bleak Sunday afternoon or coupled nostalgia on a beach during seasonal change.

Inherently loving, like the under-folded creases of a well-worn armchair sat in the corner of a relatives front-room, sometimes communicative sentimentality isn’t enough to keep the fire burning, but with Lewis Duffin waxing lyrical we’re given a post-lockdown sanctity- a breath of fresh air, and a much needed one at that.

Wearing your heart on your sleeve will only get you as far as the next stop, if you fail to watch out for the signs ahead. Hold on to the questioning hope of a greyscale horizon, the inky dip of sea between a new-dawn and the lulled hum of a pebbled beach. Listen to ‘Ballad Of You & I’.