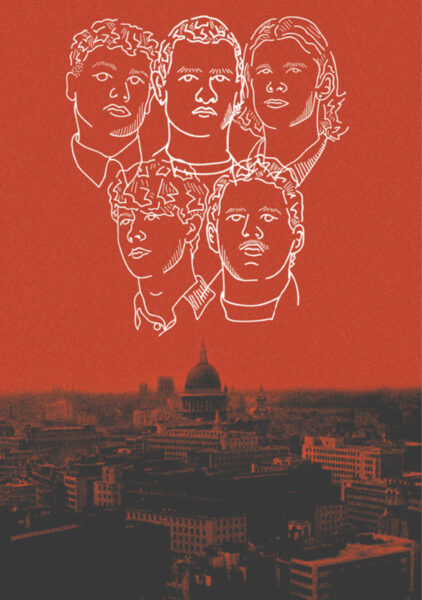 The Murder Capital were formed out of necessity. Not just a desire but a genuine need to express oneself through the art of music.

Having formed within such an encapsulating capital like Dublin, the group have quickly grown into themselves, finding their platform to vocalise the human aspirations and impulses they possess. The Murder Capital are the essence of personal and vulnerable exhibition.

How does it feel to be playing your music in different countries and bringing it to bigger and bigger audiences when thematically it is so entrenched within the heart of Ireland?

You seem to be very aware of your roots, how has Ireland informed not only the very being of the group but impacted on yourselves growing up, positively or negatively?

Gabriel: Well I suppose that’s the reason you start making art, is to express the situations that you find yourselves in.  I lived in Donegal for a lot of years before I moved to Dublin, it was only in the past year or two when I met the boys that you completely get encapsulated by the culture, being around people in Ireland who are the same age and have gone through the same things as you.

James: It’s opening up, there’s definitely unity. That’s something positive about our generation, it’s opening itself up.

Gabriel: There’s that thing that everyone feels “we’re fucked, let’s be fucked together” but I think what’s happening in Dublin is we’ve kind of gone past that feeling of we’re all fucked together to how can we make everything better? How can we mean something and make an impact on culture?

I feel like I have this conversation on a near weekly basis, where I’m just asking what the fuck is going on?

James: You aren’t just going calling over to your friends house anymore if you are experiencing life through a 12 megapixel lens.

Gabriel: The price of going out in Ireland is nearly the same price as a counselling session, so young fellas our age just tend to do that to talk about their feelings.

James: You can probably go to counselling for £50 an hour, but people spend that on half a gram? Not saying you can’t do both, maybe that’s something to talk about in the counselling session.

We live in a time and a generation where as much as we attempt to combat toxic masculinity and the inability to talk to one another about issues we may have, the nihilistic restrictions that we set ourselves are very much still there at the heart of the issue. Not to sound defeatist myself, personally do you think this can be combated on such a scale?

James: I think the human race seems to be like an elastic band in the way that it deals with things. Everything is fucked and it’s on one side, so we try and fix it, we go way too far the other way and we’re fucked in a whole different light now. I think in a lot of ways that might be where we’re at now, and we’re just waiting to come back.

Gabriel: I think men will get to a point where they can express themselves, because even my own boy, his generation, having being born when I was born I feel like I’m able to talk about my feelings, teaching him to be able to do that from being quite closed off, it’s definitely possible for all men to taught to be like that. At the same time everyone is different and there is a lot of men in the world that won’t want to do that. Yet I definitely think toxic masculinity can be beaten.

The Murder Capital play Latitude Festival later this month. Catch them on the Friday at the Sunrise Arena. This interview features in Issue Twenty of So Young which you can read in full here. Illustration by Carter O’Sullivan.