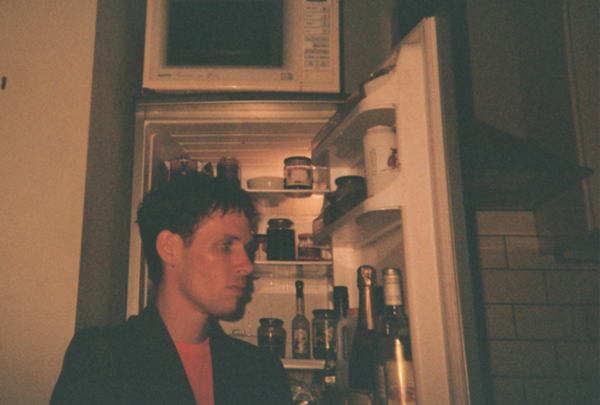 On his debut EP, ‘What’s On the TV?’, William Blackaby delivers a collection of four instantly sharp tracks that manage to combine fuzzed-out bliss, gorgeous floating melodies and lyrics that muse about the ennui of everyday situations.

Speaking to the man behind the madness, Blackaby provided an insight into the methods and influences that made this debut offering what it is – a charming introduction to an artist brimming with ideas.

It must be an odd time to be releasing your debut EP when you can’t promote the release with live shows – since you were getting a lot of attention for your live performances is this quite a bittersweet feeling for you?

Having these songs out and finally hearing people’s reactions to them has been a nice distraction from getting caught up in my own little world – I must say the feeling of doom has crept up even more lately. We also did a session for Close Encounter Club at the Battersea Arts Centre, and that was really nice to be able to play at a venue for the first time since February. It definitely is still frustrating because I’ve got a really great live band who I’d love to be promoting it with, but then I’ve also done a few bedroom sets which I guess has still scratched the itch a little.

Would you say it’s quite a relief to hear the good feedback having been sat on it for a while?

It took a while to get it to feel right. I mean, it took three years to finally feel like it was worth putting some proper tunes out. The reaction has been much better than I thought though, I guess when you’ve just been sat on those songs and you’re so used to hearing them you don’t know if it’s going to connect with anyone.

Was coming back to things you’d not touched for a long time a little odd?

We put them all through a tape machine just before we got them mastered and messed with the pitch a little bit. It’s very subtle but you can probably notice it a little bit on the song ‘Bubblegum’ where we just changed it ever so slightly so it wobbles a little bit. We then sped ‘What’s On the TV?’ up a little bit as well, and it was things like that that freshened it up a little bit for us and sort of brought a bit of new life into the songs.

There were a number of standalone singles that didn’t make it onto the EP. What was the selection process behind what made it onto the record?

There were three tracks that I just decided to put on YouTube just to sort of test the water a little bit, none of them were part of a big session and were done standalone with various different producers/friends around London. It felt like they didn’t quite belong as part of a collection of songs but I did want to release them into the world, particularly the song ‘Lee’ which I’m very fond of. They just felt like quite good songs, but the four that were on the EP felt like they went well together so I wanted to bunch those together.

There was a noticeable stylistic shift between them as well.

It’s probably because I recorded them after the EP, and I think those producers were keen to put their stamp on it, whereas in the EP sessions it was more of a classic ‘band’ sound; more of a rock band I suppose. I was conscious of that and did wonder whether it sounded like the same project but essentially I figured that it had my voice on it so there was enough similarity.

Was there a particular thing you had in mind or anything you wanted to showcase when you began those recording sessions?

I’ve played in quite a few bands over the years and I just really wanted to have a go at playing all the instruments myself and making it sound like a band – also bashing it out as quick as possible doing it that way. I guess it ended up not being a ‘me’ project, but all I really wanted to do was play songs without needing to run it past other band members. I know that can be really helpful, but I wanted to do my own thing.

There’s as many folk elements as there are garage rock influences present on the EP – what would you say stylistically informs your songwriting the most?

A bit of folk, a bit of country and a lot of classic songwriting have been a big influence on me, but then there’s all of the more punk things that I might have listened to growing up. Certainly, when I’m sitting down with a guitar I’ll look to things like John Martyn for inspiration, and then it’s fun to try messing around with the chords or time signatures to turn it into a completely different song to the one you initially sat down with. You can totally change a song just by making it 100bpm faster.

My parents didn’t have a huge music collection; my mum loved Cliff Richard so I knew all of his songs and words, and the calendar was always up every year completely unironically. They did have a record collection though that went a bit further, and a bit later on I discovered things like Rubber Soul and realised that probably triggered something in me. For me, whatever you listen to as a kid is the entire world of music. You don’t get curious about anything else until you hang out with mates and get introduced to metal and punk and everything in between.

The only other musical influence I had at a young age was going to church every Sunday. I drifted away from it in my teenage years and decided it wasn’t for me, but it was the sort of church that had a band playing at the front, almost like a rock band. My thoughts at that age were that those guys were so cool and that I wanted to be the guy that played the gold drum kit. The other guy had a red Strat, and to me they were just the coolest dudes in the world. I didn’t care that it was Christian rock, I was transfixed by them and it was exciting – it wasn’t cool though. Later on I got to the point where I realised that and thought that I’ll keep hold of the music, I just won’t go here every Sunday.

It seems as though you thrive on taking simple ideas and embellishing them in very creative ways.

I do sit there for a long time with the guitar and I just go through so many ideas. All of the chord sequences have been done, so it’s just a case of finding a change that feels a little bit special and has a bit of identity to it. There are also times where you can have a really mundane chord progression but put an absolutely nuts melody over the top of it and suddenly it becomes something special. Things like [Neutral Milk Hotel’s] ‘In the Aeroplane Over the Sea’ have the same four chords throughout the song but the melody gives me goosebumps every time and is spine-tinglingly amazing.

Lyrically the EP deals with a lot of themes of frustration around the more mundane aspects of life, where do you tend to draw your inspiration from when crafting lyrics?

I think frustration is an interesting thing to notice and was quite key, but I try and be a little bit more positive with my songwriting now – I don’t want to get too doom and gloom. I won’t know what I’m going to write about and the melody will inform my choice of words, based on how nice it is to say to that tune. You can always delve into the classics though. Things like school were very good for me, but an uncomfortable time that I can draw inspiration from. Absurd moments in your youth are things I like to pick on and write about. Using people’s names also really brings it to life for me, so if the guy’s name was Clive, I’d work the name into the song. It’s kind of normal, but I think people relate to normal. I like lyrics to be something that people recognise as being something they’ve been through too.

I also like writing random stuff down. I’ve got a big pool of books where I’ve scribbled phrases in which is quite handy to just dive into. During lockdown I’ve been doing these brain dump things, where every morning I’ll literally note down three pages of whatever comes into my head. It’s really difficult at first, and then towards the end you’re just flowing. It’s a great way to start the day, even if you’ve just written three pages of utter nonsense, you’ve done something sort of creative. I’d recommend it.

Are there any particular lyricists you appreciate?

I remember being quite young and hearing Ben Folds Five. I mean, he went a bit [grimaces] in his later albums, but the first and second record I really enjoyed. There’s a song called ‘Uncle Walter’ which is about his uncle generally being a grouchy old man, and I think that was the first time I’d heard people’s names being used in songs in a way that was also quite humorous. I’m struggling to think of an exact philosophy, but I really enjoyed the way he wrote lyrics. The fact that it was quite a raw piano, bass and drums setup was also really pleasing to my ears, so that was a turning point for me in wanting to write songs because I really appreciated that style of writing in my teenage years.

We’ve got this session we recorded coming out soon, which I’m going to treat as being a release party of sorts, but I’d really just love to get to releasing as much new music as soon as possible. Because it’s been the thing that’s kept me going through all of this, I just want to do more so that’s what I can see happening in the not too distant future. I guess for next year we’re hoping things get back to normal and we can have a lot more of a musical community again.