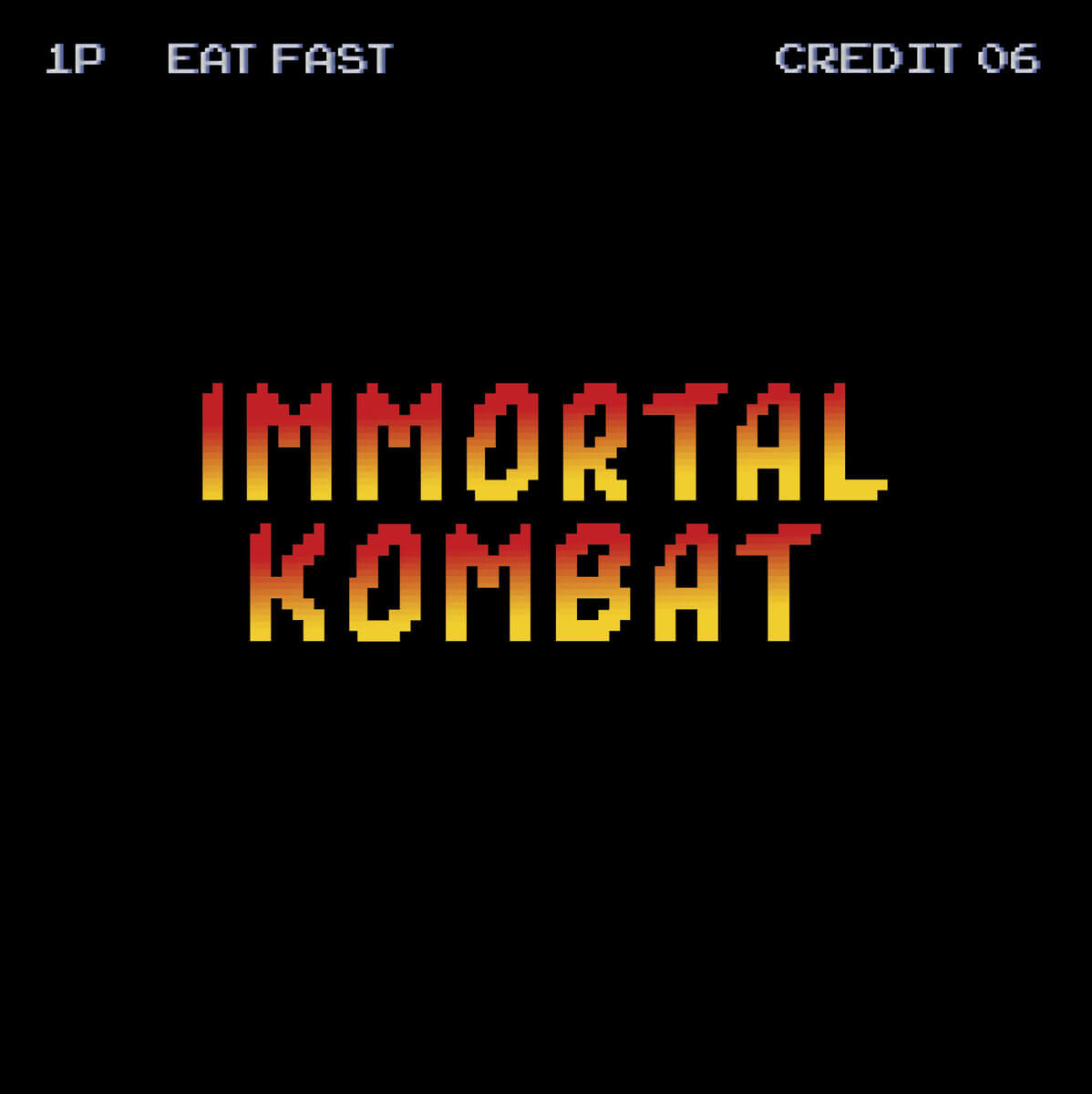 With a name that suggests they gobble their food, EAT FAST are also not stopping for breath as they tear out of the North East at a ferocious pace.

The band were formed after frontman Adam Pearson and guitarist John Edgar returned home to Newcastle after a spell in Edinburgh, where Adam had been writing a PhD. The move back across the Scottish border and back into band-life (following a period when a frustrated Adam had broken away from playing music altogether) came after “things kind of went tits up for both of us in different respects”, Adam explains. The line-up was completed by drummer James King (Kingy) and bassist Mark Brown (Brownie), who they’d encountered gigging around the city in their earlier bands.

The release of the second single from their second EP ‘IMMORTAL KOMBAT’, which arrives as they add the finishing touches to their next EP suggests they are not slowing down any time soon.

The ‘IMMORTAL KOMBAT’ EP is your first release on Cannibal Hymns. How does it feel to be part of that family now?

How does it compare to the last EP, ‘Fenham Dread(Lock)’?

For the last EP we recorded an album’s-worth of what turned out to be demos and then compiled four of those songs. With ‘IMMORTAL KOMBAT’ we’ve at least tried to make it one big, fluid piece of music. It’s more of a complete piece. 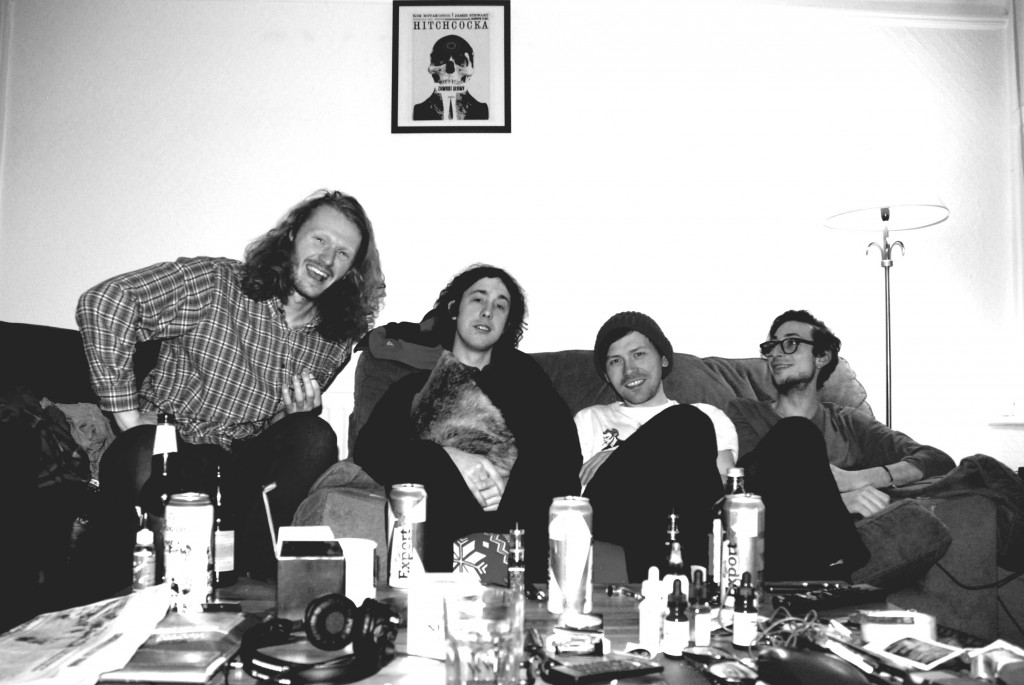 Did having that focus make it easier?

I don’t know. I really like EPs and albums as music with transitions and good flow. Almost like it’s a wall and the songs are bricks… I like to have cement between each song so there’s a constant theme or aesthetic. With ‘IMMORTAL KOMBAT’ we had to be a little more inventive in order to get that cement.

You’re dealing with heavy topics on the EP, like loneliness and death, but you’re delivering them via these fun, explosive tracks. Do you enjoy that juxtaposition?

Well I mean, if you can’t laugh… Without trying to sound more morbid than I am, that’s in my head and it has been for a long time; I was writing a PhD about approaches towards death and mortality in contemporary poetry. But I would be reluctant to say it’s as insular as that. It’s also reflective on how people relate to each other as well. It’s not as narcissistic as a reflection on your own mortality would maybe be. It’s kind of how you have that as you interact and form relationships and communicate with other people and the world around you.

You all work together in the same pub in Newcastle, The Tyne Bar?

Yeah, for our sins! It’s a really good place, like if you’re not working you can have a pint and a chat with someone about something interesting, like about what’s going on with music and stuff. But also when you’re stood behind the bar when it’s dead quiet, on like a Tuesday afternoon, you feel like, “I should be at home writing songs”. But I think there are about five people in Britain who make money off music so it’s just got to be done.

Do you talk about band business behind the bar or do you separate work and play?

No, there’s no separation really. It’s all work but it’s also all fun. We see each other every day. Someone asked me once, “What do you do outside of the band?” and there isn’t really an outside the band! It’s constant dialogue and I don’t think we’ll ever get sick of it. If you’re running past with food for another table you’re like, “By the way can you send an email to so-and-so? Is that alright?”

Would you say you’re quite a disciplined band then?

Yeah but I’m sure it’s the same for everyone else, you’ve got to live it all the time. It’s something that we all want to do so it’s not a chore for us at all. I wouldn’t want to be working with anyone unless they were totally committed. You’ve got to obsess. It took me to go to academia to think, “Why didn’t I do that with music? Why didn’t I do music 9 to 5? Or 9 to 9?”

And you all played in bands before EAT FAST?

Yeah. I mean I didn’t play songs for a while. I just got really sick of it and to be totally honest I was just frustrated at the lack of progress – not even financially – but any sort. I didn’t understand how things were done, I didn’t understand the process. I didn’t understand anything about PR and the industry and stuff like that. When I was younger I kind of had my back against the wall and was just like, “Ahh fuck you! I’ll do what I want. I don’t really give a shit what you think!” but as you get older it’s like, “Oh this isn’t as hard as I thought it would be but I’ve just got to be patient and graft.”

What’s your take on the music scene in the North East at the moment? Does it feel like there’s a new lease of life around Newcastle?

Definitely. I think for a long time it had kind of stagnated.  A lot of bands I loved when I was growing up like Mammal Club, Cat Weasels, Nately’s Whore’s Kid Sister and really good big bands from the North East kind of disintegrated. You know, that happens as people get older and have different priorities. When I came back from Edinburgh it felt like there was a bit of a hole but there were really young people putting on gigs in like old buildings and practise rooms so it did feel like there was something a little bit fresh. Then like a year later, when EAT FAST started going properly, it felt like you were seeing the fruits of that labour with loads of new bands coming out. It’s just really class to see. People seem genuinely excited.

And you reference where you’re from quite obviously with tracks like ‘Byker Drone’ and ‘Fenham Dreadlock’ and the ‘IMMORTAL KOMBAT’ EP even features a radio transmission from the North East. How much do you feel like your home is tied into the identity of EAT FAST?

I’m reluctant to say extremely so because I’m not a big fan of sort of provincial tribalism and then on a national level it’s alarming. I wrote a lot of those songs when I was missing Newcastle and I wrote all of those songs just for me and so I don’t really feel the need to apologise for that. There are bigger themes than the place in which they’re situated. It doesn’t matter if you’ve never walked up Westgate Road. Like I’m very proud to be from an area of Britain that has a long-standing tradition of literary and musical talent which I admire but it’s also like if I was anywhere in the world I’d still be thinking about the same things and I’d still be writing about them.

EAT FAST have a distinctive sound. I’ve noticed you’ve often been described as ‘fuzzy’ and ‘radgey’, to use a local term! How did you arrive at that sound?

I’ve got a really good pedal called a Big Muff Pi which has been my baby for about 4, 5 years. Everything that I’ve made over that period of time has gone first and foremost through that filter. So it was like a habitual aesthetic. In terms of like being radgey or fast-paced, it’s not a concerted effort to be over a certain BPM, it just comes out like that. I think it’s ‘cause I was so frustrated for so long and not doing anything that I was like, “OK let’s go for it, let’s do something that people can headbang to or dance to.” A balance between wanting to move your body to it but also something to think about.