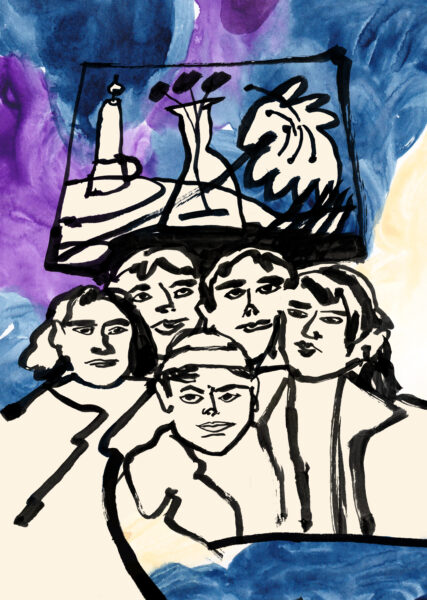 An interview with Iceage which originally featured within Issue Thirty of So Young Magazine.

For a decade now, we have been blessed with Iceage. From the furious punk railings of ‘New Brigade’ to the swampy romantic grandeur of 2018’s ‘Beyondless’, they have always encapsulated a certain gorgeous, melodramatic ecstasy which has propelled them from the depths of Copenhagen’s dirtiest venues to the furthest reaches of the globe.

Entering 2021, we are confronted with the prospect of a fifth chapter in their opulently old-testament universe. ‘Seek Shelter’, their first release through Mexican Summer, was recorded over an intensive 12-day stretch at Lisbon’s Namouche studio, a monument to 60’s vintage which found the band placing cloths over the buckets used to collect water from leaks so as not to interfere with the sound. The album mirrors the dilapidated grandeur of the space, as frontman Elias Bender Rønnenfelt is found desperately searching for the ethereal hand of salvation. Iceage have never been content to inhabit the middle ground, and it is this exuberant exploration of extremity which has made them one of this generation’s most important bands.

We caught up with Rønnenfelt to discuss the new album, religion, and the effects of a life spent as a musician.

Looking at photos, and reading about the haphazard nature of Namouche studio, when listening to the album you can almost feel the aura of the space. Are you someone who’s output and creativity is particularly affected by the aesthetic surroundings when you work?

Yeah, I think we always consciously try and pick somewhere that has a certain atmosphere – a room that isn’t sterile, that has some kind of spirit that can breathe something into our work. I don’t sit and sense the room, try and become one with it, but I think subconsciously the surroundings you create for yourself and the environment you create will definitely impact it to some degree. Because recording songs takes quite a lot of living in a certain moment, once you push that record button you can actually project some immediacy into what goes down on the tape. The environment then does become a part of that whole entity.

You drafted in Pete Kember of Spacemen 3 on production duty, and mentioned feeling he needed to be almost a ‘wizard’ for you. How did that shape the sound of the record?

We wanted a ‘wizard’ because we didn’t need anyone to come in and shape the songs for us, or tell us what to do – we just needed a sparring partner that could become its own mind to contribute things we wouldn’t ordinarily come to ourselves. Peter is definitely a genius in his own right, with a wayward sense of sonic thinking. So he was there to help shape sounds, and often we would talk about the sound we were trying to achieve not on a technical level, but more of a vivid, visceral language – like ‘this particular break needs to sound like a car crash’ and he’d come in with a specific type of pedal for that. He was also just such a downright lovely gentleman to be with, our stomachs were hurting by the end of the session from laughing at all the bullshit we were talking.

Something prominent on the new album is the reference to divinity, and searching for salvation – but this theme has been running through your music for some time now. Would you consider yourself religious? Or do you have a relationship with something that is a higher power?

I don’t know if I would consider myself religious, but I have an undeniable relationship with religion, I’m quite naturally attracted to the imagery of it, and when trying to make sense of things and mould them into lyric form, for example. I grew up in a partially Catholic family, and was brought up in a Christian school with church singing every morning – for better or worse it’s ingrained in me. When trying to take actual living and put it into the context of a song, it seems like there’s something in that which wants to reach towards heights, which sometimes becomes this search for divinity, where instead of having a rift that spans between good or bad, there’s a need to extend that so it becomes almost heaven and hell. I think it’s in my nature as a songwriter to reach further than what I’m actually capable of.

I do get that, because something I’ve always enjoyed about your work is your ability to transform the ordinary into the transcendental. Is that ability to go beyond the immediate feel of things something particularly important to you, both in terms of your writing and the way you live your life?

I don’t aim to search for those places, but it happens every time I sit down and write lyrics for something, I end up there. There’s always a point in a particular song or in the midst of writing where you hit that vein where things spill onto the page, there’s a release. I’m now almost at that moment where it’s a bit ‘here we go again, fucking typical’!

I read an interview with Nick Cave where he said something similar about hitting that vein, and that the most difficult thing for him was releasing an album, and then having to do all the press and touring that accompanies that, and it actually becomes quite painful to reach that point again. Is that something you agree with? Or is it just quite natural now?

Well this is the difficult part – this is one of the first interviews I’ve done since we started this record cycle, so it’s been a while since I actually sat down with it, because it’s been a while since it was finished and I consciously try to push it away once it’s done. So now I have to trick my memory to try and figure out what the fuck I was thinking at the time, and after you’ve done a certain amount of interviews you’ve retraced what happened, and what my thought process was, but for now I’m actually quite unclear about what this thing is!

Are you someone who re-listens to the work you’ve put out? Or is it just about moving onto that next chapter, having bookmarked that part of your life?

I almost never sit down and listen to an album I’ve made, just because it feels a bit self-masturbatory, as well as being an uncomfortable mirror into the past – you start to see the flaws, and are confronted by the ghosts of former selves, so to speak. I’m not very self-congratulatory or nostalgic about things in general, so I try to keep focussed on what’s next – looking into that body of work seems like a distraction. Maybe someday when I’m an old man I can sit back and look back fondly, or end up in a situation where I have to figure out what I’ve actually done with my life! But we’ll see about that.

Do you keep journals and diaries, and do they influence your writing?

I always keep journals, and when it’s time to execute lyrics for an album I use them as a navigation system for what I’ve lived through, and to figure out what can be broken up and molded to song form. They’re source material.

Is that something you’re constantly referring back to? Or do you revisit them in one motion when writing so everything has the same feel of mindset to it?

I consciously try not to write lyrics in my free time, it’s only when there’s an album that’s about to be recorded that I actually sit down and do it in a fixed period of time, just to make sure that all of the album is born of the same mindset, it keeps it whole. It also gives you the freedom to let the memories it’s based upon mutate, and then you curate. You can write a song that is based about two different subjects or moments that mold together to be something that is entirely different.

Since the release of ‘Beyondless’, at least from my vantage point, it seems like you toured the world relentlessly until Covid. You’ve been involved in that cycle of tension build and release for a decade now – has that altered how you relate to life? Both musically and personally?

Yeah. The band has gone from something that was just blindly lashing out, towards something where you’re aware that this is now your pursuit. You end up tying a lot of what you anchor as meaningful in your life around creating the music. It’s a funny thing how in order to create these things, you need to go out and live them, so you can tie it together. It becomes a way of making things tangible, and in that sense easier to deal with. It’s now the only thing that makes sense, I couldn’t ever imagine seeing life otherwise. My brain now revolves around tying life into song form.

The new issue of So Young is out now Ft. Squid, The Horrors, Sorry and many more. You can order your copy here or read the digital edition below.