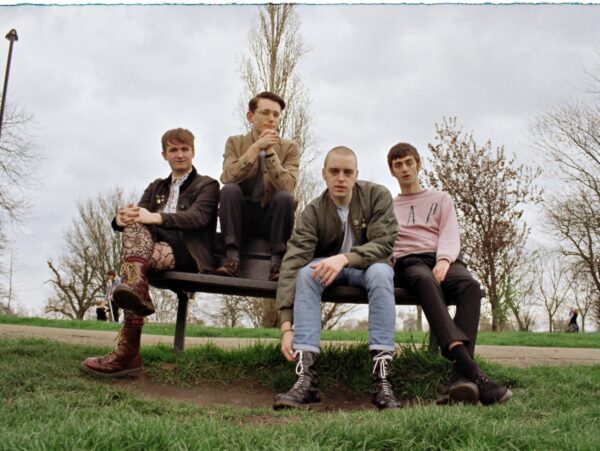 We’re now well into September and still the effects of summer linger. Whether you festival-ed, watched from the side-lines or simply took it easy, it’s safe to say it’s been a good one. As splendidly we all try and arise from our well-deserved naps, seasons change, the full moon harvested and as if by universal luck Italia 90 realise a new single for us all to enjoy- a coincidence?? We think not. We spoke with the band as they geared up to play their launch party.

Italia 90! It’s Friday, how are ya and what’s the plan for tonight?

We’re going through our set at Deptford Music Complex, in preparation for our single launch at The Windmill tomorrow. There’s a nice roof terrace here which will be familiar to many of our south London friends. We’re feeling good/fine.

You’ve said before your music is ‘united by friendship’, how did you find each other?

We’ve all known each other since school but only started the band in the last few years. Essentially our long-lasting friendship is state mandated given the school catchment area that we lived in at the time.

With two previously self-released cassettes, what made you decide to collaborate with Fierce Panda & Permanent Creeps (two DIY champions in their own right) on the latest single?

We were simply charmed by both outfits. They were clearly interested in us and it’s nice for people to be enthusiastic. Fierce Panda have worked with some of our friends recently, including one our favourite bands Scrounge.

What’s the context behind ‘An Episode’? Do you write from personal stand-points or is the lyric process more observational / fictionalised?

Normally the songs are about fairly broad themes and ideas. An Episode’s a bit different as it’s about a particularly troubling late-night encounter.

Has having a voice that speaks out against current state of affairs almost become expected for those active within the ‘post-punk scene’ and how does this impact the socially political content of your own writing?

That’s a good question. There are a lot of bands that are currently touted as quite radical, but don’t really seem to be saying a huge amount. It can feel like posturing sometimes. The political content of our songs matter a lot to us and we can’t really imagine what else we’d sing about.

Do you have a favourite release so far?

We’ve had a bit more attention recently but we’re still really proud of our first EP. We still play a lot of those songs live, which either suggests they’re really good, or we’ve become lazier.

You’re set to play The Windmill on the 14th [of September] but, it’s not your first appearance! Is there any pressure playing and returning to a venue which has become infamous over the years for platforming ‘emerging’ South Londoners and beyond?

We don’t really see it like that. We feel really comfortable at The Windmill and love every gig we play there. We’re really happy to play a venue that so consistently puts on good bands.

That aside, what can we expect next from Italia 90?

More of the same hopefully, we’re having a nice time. Our third EP is out by the end of the year [and] there’s also some fun gigs coming up in London, some festivals in Europe and hopefully a UK tour in the new year. We’ll be getting an album out at some point as well, whether you like it or not.