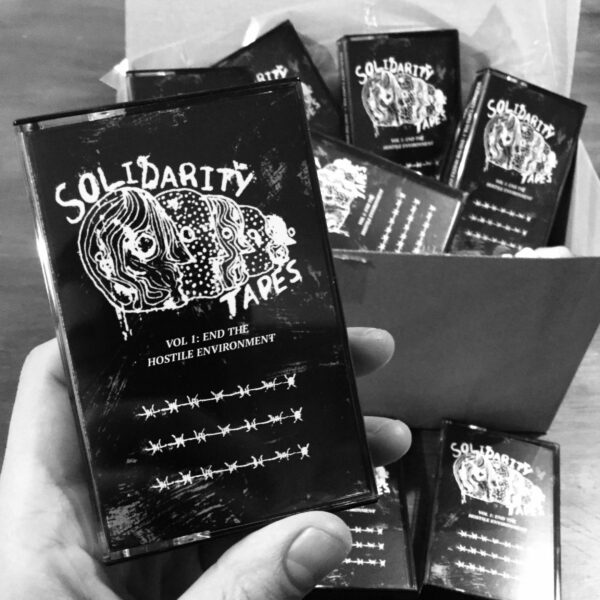 If the pandemic and its subsequent lockdown’s have highlighted one thing, its the importance of grass roots support. Whether its equality movements, getting behind the independent businesses or investigating how you can make more of a difference to the community around you – it’s been vital.

Brothers and artists, Toby, Josh & Aidan Evans-Jesra are responsible for Solidarity Tapes, a cultural project which aims to lift the burden and raise money for grassroots organisations working for migrant, racial, social and climate justice through the release of compilation tapes and zines. Their debut release ‘Vol 1: End The Hostile Environment’ (out now) pulls together an impressive line up of familiar names from London and beyond including Goat Girl, Dan Carey, Big Joanie, Jelly Cleaver, Italia 90 and more.

Following the release on Friday (Nov 6th) we were keen to find out a bit more about the tapes, who they’re supporting and how it all came together. Here’s our chat with Solidarity Tapes.

Could you tell us a little bit about Solidarity Tapes, who’s behind it and what you’re aiming to achieve?

We are three brothers involved in the DIY music scene in London/Brighton and are activists involved in migrant/climate justice struggles and we believe there could be a more explicit link between music and activism. In the current political context we think it is more important than ever to stand in solidarity with marginalised communities and to resist the UK’s hostile environment to migrants, we aim to simultaneously platform these voices, to spotlight talent and create a space for musicians to express radical solidarity, to raise awareness and to raise funds for groups doing vital work.

Supporters can find out more inside of the zine which accompanies the tape, but could you give us a bit of an insight as to where your fundraising will go and why you’ve chosen these causes in particular?

We wanted to support migrant solidarity groups grassroots groups run predominantly by women and black and people of colour, and groups that are working throughout Europe’s violent border regime.

MASS Action support a variety of projects throughout Greece and the UK, they focus on projects that are led by people with lived experience of migration and asylum systems for example Khora Community Centre in Athens which is a community space for migrants to gain access to food, clothing, education and legal support.

Project Play operates in Northern France providing play sessions to children in the informal camps around Calais and Dunkirk, they provide a space for kids to be kids in exceptionally bleak circumstances where the kids have no access to education and live in tents constantly evicted by the police.

All-African Womens Group are a group of migrant and asylum seeker women based in London who operate as a self-help, mutual aid network that support each other in their legal cases and whilst in detention centres, they also play a vital role in educating activist groups and organising protests against the hostile environment. We wanted to highlight groups that embody the idea of solidarity not charity, groups that are explicitly political and to avoid the apolitical, white saviourism of the humanitarian charity sector. Charity far too often focuses on addressing the symptoms rather than the causes of an issue, migrant solidarity is about “empathy not sympathy, solidarity not saviourism, and justice not charity.”

Was there a moment or a particular happening which inspired you to get Solidarity Tapes off the ground and move it from an idea into something real?

The project has been in the works for a while, Volume 1 was supposed to be released in March just before lockdown, we had a big release show planned and a series of events that were a combination of activist workshops and live music events that were obviously unable to go ahead. It’s hard to pinpoint a single event or moment that inspired us when the dominant narrative around migrants from politicians and the right-wing press is constantly dehumanising to a dangerous degree and based on disinformation and dog-whistling. There seems to be an urgent imperative to challenge those ideas in whatever way you can; Solidarity Tapes is just one way for us to platform those voices and express solidarity whilst raising funds.

You’ve pulled in some impressive names to support the project like Goat Girl, Dan Carey, Big Joanie and PVA. How easy was the process and what has it been like to work with so many people who’d like to help?

We’re so pleased with the lineup, everyone we approached was really excited about the project and supportive. For first release we mostly approached friends or people we had worked with in the past in some way, there were a few bands we’d never met but were fans of. We ended up getting more tracks than we could put out for Volume 1 so have started curating Volume 2 already, hopefully with the momentum from this release we’ll be able to expand the project, get more artists involved, reach more people and raise more funds.

The compilation boasts an eclectic mix of genres and styles. Is this something that was intentional and possibly represents the community it was born out of?

Curating the tape was a really fun and interesting process, we wanted to have a real mix of genres and bands and to be as intersectional as possible so as to fully represent the music we love. Other than that there was no theme or specifics, apart from the music being great. It was great to line up some lesser known acts with bands that have more attention, it makes for a more interesting listen, I like that Side A ends with an exclusive stripped back version of Goat Girl’s ‘Lay Down’ and then Side B bursts open with a weird bubblegum organ pop song by underground Glasgow artist Horse Whisperer.

You’ve produced a zine to partner the compilation tape, can you tell us a bit about it and why it was important that this fundraising project had a physical format attached to it rather than just a download?

This project aims to make explicit links between music and activism, we want it to be as much about raising awareness as it is about raising funds. The accompanying zine aims to platform migrant and BPOC voices, provide a space for artists to express solidarity with migrants and highlight the diversity of ways people can get involved in migrant justice activism. It can often feel overwhelming when thinking about how fucked up the world is right now, this can lead to cynicism and apathy. We hope that content in the zine can show the inspiring different ways in which people are resisting violent borders, racism and fascism – whether this be through direct action, subvertising, DJ workshops, radical education and more… The zine includes art, photography, essays, playlists, poetry, illustrations and more all based around the themes of migration, race, music and resistance. It was important to have a physical tape and zine because in a digital saturated world there is value in physical engagement with art, it encourages a different kind of engagement and one that can be deeper and more long-lasting – in an age of instant gratification and limited attention spans having something physical provides something to return to and not just get lost scrolling.

Finally, for those who haven’t grabbed their tape yet or who have but want to continue to help, what can people do to support the cause?

There are so many different ways of getting involved! Would highly recommend looking into the three groups we’re fundraising for, MASS Action can point you in the direction of a number of frontline groups to volunteer with across Europe’s border, as with Project Play – if you have any experience working with children they’re always looking for new team members. As mentioned the zine highlights a number of other activist groups – Our Future Now, Lesbians and Gays Support the Migrants, Migrants Organise, Gatwick Detainee Support and more – that you should check out and see how to get involved. Donating money is great, but if you can give up some of your time in active solidarity you can make a real difference in a variety of ways. Especially in the context of this global pandemic we’d also really recommend checking out your local mutual aid group and spending time there. But also we hope that with this project we can show that music and art can be a useful tool in activism. It’s a political choice how we decide to spend our time, quoting a phrase popularised by the Black Lives Matter uprisings this year, ‘Silence is Violence’, choosing to do nothing, to stay silent is essentially choosing the side of the oppressor – things are looking very bleak at the moment but there are so many ways to help, to support and to show solidarity.

You can have a taste of Vol.1 here but please do go and support where you can by purchasing the compilation.