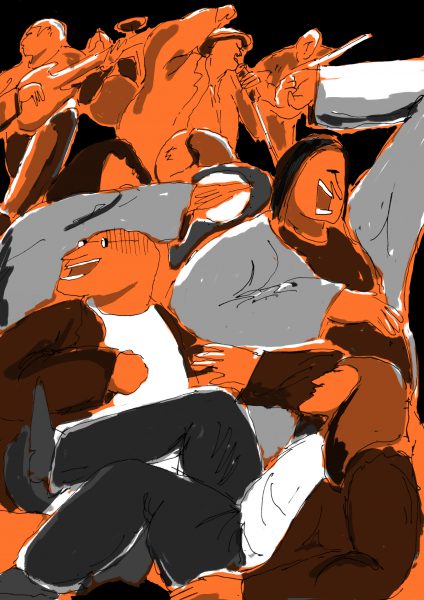 Copenhagen’s prodigal sons have returned from a hiatus spanning four years- and judging by the direction the world has tilted in since their 2014 opus Plowing Into the Field of Love, they have emerged at the perfect time to soundtrack some form of cataclysmic event.  New album Beyondless is their fourth, and provides the logical continuation to the glorious melodrama of their first three albums. It sees the band continue their path away from the abrasive industrial punk of their early work and into a more refined realm that conjures the feeling of playing Russian roulette at an upscale dinner party. A joyful bacchanal scaled to fit true extremities of emotion, an immersive experience which owes more to the narcotic sleaze of Exile on Main Street than the Germs, Beyondless still causes adrenaline to come screaming down the spine like volts from a cattle prod.

The new album sees the addition of horns and strings to the instrumental repertoire, providing a fleshing out to the sense of manic urgency so characteristic of the band- but rather than resulting in a loss of vitality, Beyondless provides a platform for the Danes to showcase in the complexity. Enigmatic frontman Elias Bender Rønnenfelt’s second-language poetry reaches new heights of esoterica on tracks such as new single ‘The Day the Music Dies’, which sees him declare with biblical conviction:

Jumping from one bosom to the next
Hitting every branch in the fall
Beaten to a pulp by every caress
In the tempest, unaffected by it all
And I’m hoping that the end is nigh
I’m waiting for the day the music dies.

In an age where out-and-out rock ‘n’ roll so often must resort to gimmick or mindless rage to convey a message, Beyondless holds an air of self-assuredness and maturity that allows the band to profess their message in a manner that would appear almost effortless were it not for ever-revolving layers of celestial beauty, visceral energy, and wry wit.  As further evidenced on recent single ‘Painkiller’, which sees American pop star, Sky Ferreira providing unlikely vocal support for Rønnenfelt, Iceage are unwilling- no, physically unable to rehash past glories simply to please an audience. This commitment to breaking new ground has produced the finest album of 2018 so far by a wide margin, proving once again that Iceage are one of the few bands still capable of inspiring almost cult-like devotion to outsider expressionism without falling prey to pretension.

With the last echoes of Beyondless fading from our ears, we rang up enigmatic frontman Elias Bender Rønnenfelt on a sunny day in Copenhagen, and after a brief interlude (“I just need to put some clothes on”), we are given the opportunity to understand if not quite ‘the method behind the madness’, then at least the inspiration behind Iceage’s timely rebirth.

The album title Beyondless [taken from Beckett novel Worstward Ho] suggests both transcendence of infinity and a degeneration into a realm beyond nothing. That seems reflected in the mix of humour and sorrow in the album. Can you tell us anything about the inspiration that went into putting it together?

Composition wise, we made it because we felt some sort of spark, some inspiration -you start by just staring at a blank piece of paper, clenching your brain like a damp piece of cloth to wring out ideas and seeing what comes out. It’s informed by life experience, by the life you’re living, trying to capture what’s changed since the last time you did it, and you have a desire to showcase your perverse sense of creativity. Humour wise I’ve always had a tendency, even when dealing with quite a serious matter, to have this twisted sense of humour that tries to corrupt things, taking turns to see what I can get away with.  I don’t think many people actually pick up on that aspect of the music.

I read somewhere that this album felt part of a ‘necessary process of pushing into something new’- and on each record you put out, you can feel an almost tangibly necessary evolution. Is the need to strike out for new ground something important for the band?

Yeah, I think that’s the only way we can remain interested in music. There’s nothing in it for me if I just rely on some sort of comfortable territory I’ve done already. I don’t want to put out some watered-down album I’ve done before once a month. But you sort of have to take the difficult route, for us at least, to make something that feels substantial, that has a sense of gravity and excitement to it. We scrapped a bunch of alright songs from the album because it didn’t seem it was adding anything new to the repertoire, its just not interesting. It’s kind of why it took us a while to write another album, because the first stuff we wrote after [2014 LP] Plowing Into the Field of Love just sounded like a continuation, without adding that new element that would give it any reason to exist out there. I think just in respect to our own output, we wouldn’t want to put anything out there that doesn’t feel it has anything to add. There’s already enough noise out there, it’s not like the world needs more hardcore records.

On Beyondless, you’ve fleshed out the sound with extra strings and horns. Has this affected the process you use to write and record?

To be honest I don’t know if the process was changed- we added the strings and horns later, but we recorded with all of us knowing that they would be there. It wasn’t so much that part that changed, more just each time you enter the studio, you gain more knowledge about how to use the studio, fumbling our way forward, trying not to overthink an idea of what something needs to be- it’s about following a gut feeling, and seeing the results as they appear.

Vocally speaking from New Brigade onwards, the level of lyricism has improved markedly album to album. Are there any particular literary figures you can point to as inspiration for subject matter or general style of writing?

In the beginning, I had quasi awakenings, where I’d read something, and it would change all previous ideas about what language can do- it took some writers, which I feel I’ve mentioned enough in other interviews, to give me a sense of the possibilities of language. But now I’m less aware of where particular influences come from- I like to think I’m gradually finding my own voice. 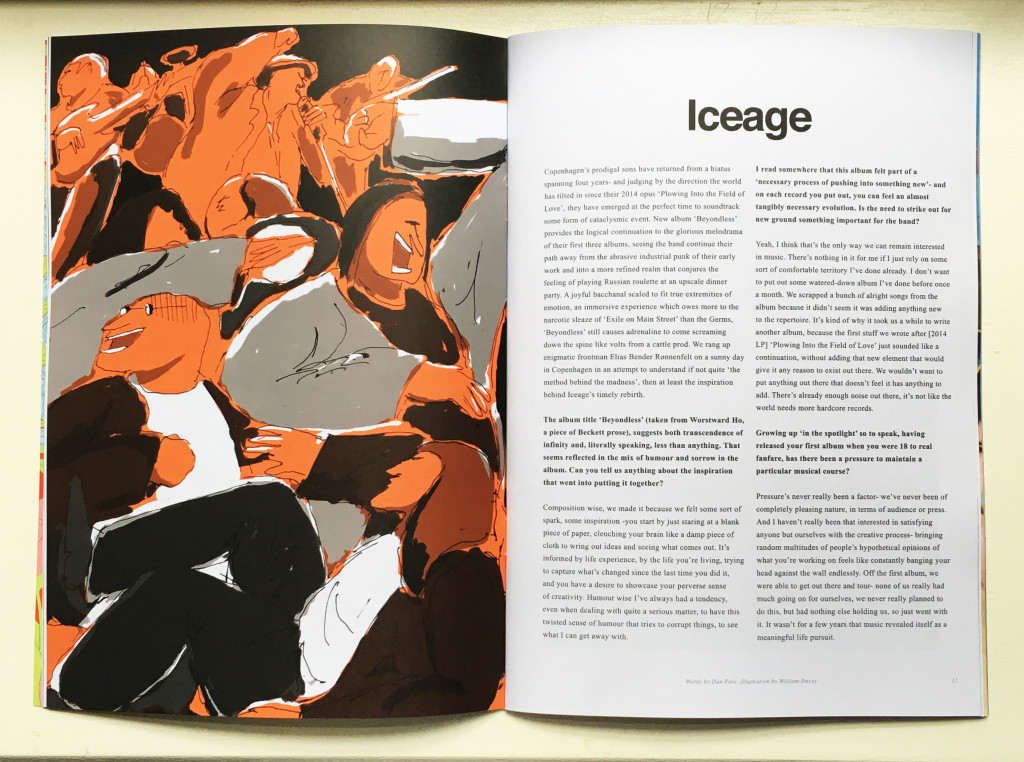 Iceage in So Young Issue 17. Buy in print here.

What are you reading at the moment?

My friend Daniel Stewart from Total Control just gave me a book called Jesus’ Son, so far it’s just a collection of short stories about scummy characters in the 70’s, just leading these seedy lives. I also read Death in Venice recently.

On ‘Painkiller’, vocals are sung by Sky Ferreira- on paper, this seems like an unlikely combination- how did it come about?

It was just while writing that song, I began hearing another voice, and I thought sharing the vocal would give it a meaning I couldn’t alone. So I was just thinking about what voice would be right for the song, she came to mind and luckily she was free to do it!

Growing up ‘in the spotlight’ so to speak, having released your first album when you were 18 to real fanfare, has there been a pressure to maintain a particular musical course?

Pressure’s never really been a factor- we’ve never been of completely pleasing nature, in terms of audience or press. And I haven’t really been that interested in satisfying anyone but ourselves with the creative process- bringing random multitudes of people’s hypothetical opinions of what you’re working on feels like constantly banging your head against the wall endlessly. Off the first album, we were able to get out there and tour- none of us really had much going on for ourselves, we never really planned to do this, but had nothing else holding us, so just went with it. It wasn’t for a few years that music revealed itself as a meaningful life pursuit.

You’re about to essentially start touring for the rest of the year, across both the US and Europe. As such an intense live performer, how do you avoid complete breakdown when living such a punishing schedule?

I don’t necessarily avoid it! I do have a capacity to stomach quite a lot, but even if you’re in a bad place while touring, it’s sort of devised in a way to make you get your shit together for stage whatever happens- because if you don’t it’s a completely meaningless existence. So much of it is just commute and waiting around, when you play live you have to get it together for that hour on stage that night or whatever otherwise it’s all pointless.

As you and the band have matured over the years, has the way you tour changed? Have you found yourself trying to be more ‘sensible’?

No, not really- I’m not very smart when it comes to that kind of stuff.