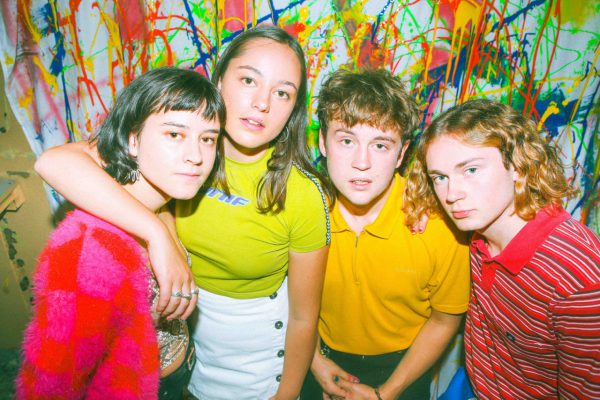 The Orielles have always been a band with a thirst for adventure. They see a genre they like, dismantle it, withdraw the parts they desire and re-mould it in to something entirely their own. Their debut album, Silver Dollar Moment, released at the start of this year, was an eye-opening release, bubbling with ideas and youthful charm. Segueing seamlessly between the spatial funk of ESG, the beautiful melodies of The Pastels and the Northern charm of the Factory Records scene, it felt like a breath of fresh air, especially from a band so young.

Today they release two stunning new tracks via Heavenly – ‘Bobbi’s Second World’ –  a wonky, hedonistic groover that is impossible to keep still to and a cover of Korean producers Peggy Gou’s ‘It Makes You Forget (itgehane)’.  We picked the band’s brains on the harmonious relation between the two releases:

My favourite thing about you, as a group, is your complete fearlessness in exploring broad musical parameters – how did you land in this disco-tinged, dance-focused territory?

It happened very naturally. We realised that we just love to dance and songs that can make us move, make us happy. We also discovered this massive world of post-punk, new wave, art-pop and dance punk/funk and we were just like.. ‘whoa’. This kind of stuff just really made us realise that guitar music can still be danceable and can make one move. To be honest, we have Jez Kerr of A Certain Ratio to thank for a lot of our musical output. He’s a good friend of ours and recommends us some great music to get into. A lot of what we write is inspired by our long, late-night hang outs with Jez and his passion for music and creativity.

How has the addition of Alex Stephen on keys helped you explore your sound?

We added a load of keys parts to the album and so we always knew that in the future we wanted someone to do this live. Sid and Alex live together so it seemed like the obvious first choice. When we played with him though we decided we could never go back to being a three piece ‘cos it just felt so right with Al, so we asked him to become a full timer! He’s certainly helped develop our live sound, which is great, making our set now sound way fuller. Also, having studied music at University, Alex has way more theoretical knowledge than any of us, which is cool and means that we can explore more interesting elements of songwriting.

You said you had an explosion of new sounds and ideas following festival season – what sets or performances inspired you over the summer?

For real! We were all very moved and inspired watching Mogwai at Latitude. We’d never seen them before, nor really listened to them in much depth, however their live set just took us to another planet and let us float around space for a while. We then wrote a kind of proggy tune, but it’s also really emotional and beautiful. We’re excited to record that at some point. Seeing Baloji at BBC Biggest Weekend was really fun and certainly inspired some African rhythms! We got our baggy on to a Bez DJ set too, haha.

There’s a wealth of music you could have covered for this release, I’m intrigued to know how you came across Peggy Gou and why you decided to settle on that song to cover?

I think we came across the track via 6music (ofc!) and loved it instantly. In a time dominated by male-fronted guitar bands, this track was like a breath of fresh air to hear on the radio and really made us stop and listen, and then dance! It’s tight that a female musician from Korea is hitting the big time and it’s truly deserved. After listening incessantly, we started to picture the main hooks and riffs of the track being played on different instruments. For example the cowbell/agogô melody we replicated on the guitar. We kind of hit a bit of a barrier when deciding what to do about the vocals. We were torn between keeping the lyrics in Korean or translating them to English, of course we wanted the authenticity of the track to still be there, however didn’t want to ruin the emotion by getting pronunciation wrong etc. After having the lyrics translated by a friend, we found that they translated really nicely and the lyrics were really beautiful, so we wanted listeners and fans of Peggy’s track to hear the song in a new way and consider the lyrics. The juxtaposition between the dance/electronic instrumentation and the poignantly emotional lyrics is something we really admired and wanted to draw people’s attention to.

We had a lot of fun recording the track as we could really go nuts with the production and adding weird filters and synthy stuff that we wouldn’t usually. We decided to be pretty free and lenient with the structure of the track too, so we pretty much improvised the whole thing, each take we did was way different. I think this makes the final version more exciting.

‘Bobbi’s Second World’ is essentially about a cat becoming a lady – are any of you the metaphorical cat in this situation?

I guess we are all the cat in this situation. The track certainly shows a more mature and considered side to our songwriting and how we have grown together to become this band that people actually like a bit…We have all become real human beans!

What are the two complex and differing realities she encounters?

On face value, she encounters a utopian and a dystopian reality. The utopia being a garden where she has all the room to explore, expand and grow as a cat in this free territory. She has a vision of a perfect environment. The dystopia she experiences relates to notions of surveillance and her lack of freedom to explore (this of course relates somewhat to the previous question, as being musicians means that there are times in which we arguably lack true freedom and our creative output is also in a way a product of public surveillance). Having said this, we encourage listeners to make their own interpretations or stories about this song. Once a song is released, it is no longer ours, but everyones, so make of it what you will!

Silver Dollar Moment has been out in the world for some time now – how do you feel now that entire body of work is out there? Has it given you room to breathe and try new things?

It still feels pretty surreal having an album out. It’s something we never thought we’d be able to say! This year has flown by though since the release, we’ve barely had time to let it fully sink in. It is interesting watching each song grow as time passes and seeing which songs are favoured over others. Obviously playing the album live is still very new and exciting to us, as half of the tracks on the record were completely new and never played before. Having Alex play live with us full time now also adds a fresh life to the tracks. It feels nice to be able to focus on completely new material and now we have a set goal of working towards the next release.