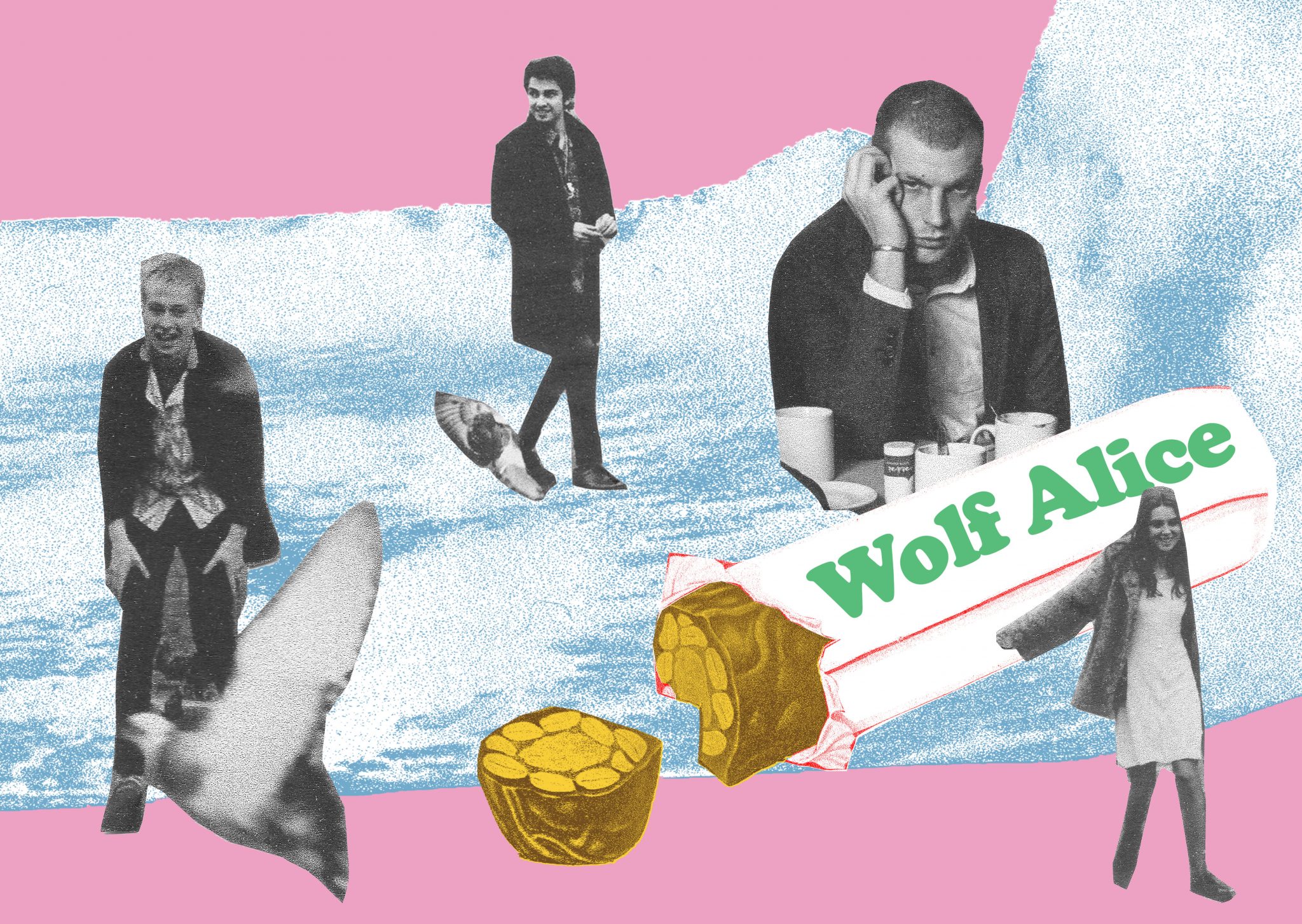 Wolf Alice are arguably the biggest band of 2015 so far. Their debut record reached number 2 in the chart and they’ve just seen off the biggest UK tour of their careers. Career seems to be a safe word when we talk about Wolf Alice, the UK and beyond have truly taken to the London four piece and they’ve done it the ‘right’ way. We interviewed the band in issue 7, just before they set out on their tour of the UK’s regions and we revisit that time with an extended edition of our chat. Rob Knaggs spoke with Joff about goal setting, America and the band’s direction outside of music.

Hello! Other than becoming the most talked about new band in the country, What have you been up to?

Since the year started to be honest, we’ve kind of been on the road. We started off the year in Australia doing some festivals down there, we came back for a week or so, got some rehearsing in and, yeah, we’ve kind of been flat out since then to be honest. We went to the US for a week just to do a couple of shows, then we went off with Alt-J into Europe for a month and then we came off that and went straight back to the US for another month, so a big tour again, that finished off at South By. Our UK tour, after that, was probably about three weeks or so and when that finished, back off to the US for another one. And we just came back last week, so we’ve been in full flow, and we’ve now got to try and get some rehearsal in.

America has always been seen as the place to really ‘make it’, are the states important to Wolf Alice? Is conquering them part of the game plan?

We like the States. It’s quite hard to say the States as a whole though cause it’s such a huge place. You’re playing some shows, and you might turn up one day and you’ve sold out a 500 cap room somewhere and there are loads of people there and there are loads of people waiting outside for you when you arrive, and you go to another place and you’re playing to maybe about 30 people or something like that. It’s definitely, you can kind of see when you’re doing it, the whole, “it’s a tough one to crack thing”.
We’re actually going back out to the States next week for a week or so to do some promo, and some shows in New York and a festival called Firefly. Well we signed about two months ago, two three months ago, with RCA in the sates, so there’s a definite push from over that side of the pond. Not to say that we’re neglecting the other places around, but there does seem to be a definite push toward the US especially for the campaign at the moment.

‘Freazy’ is a defining moment on the album. A statement of fearless ‘pop’ intentions that sounds alien to many of the other songs on the record. Can you tell us a bit about the song and does it lay foundations for future direction? Will it make the cut in the live set?

It’s a bit fruity, that one. Freazy has been around for a couple of years you know. And it’s the song that we’ve kind of had in so many different incarnations and in a lot of ways to be honest we were kind of. Before we went into the record, whenever we demoed Freazy, whenever anyone had a new idea about what we needed to do with it, we were kind of trying to force it into a box. We were trying to make it too, you know, inverted commas, cool. Or alternative and stuff like that. When really, deep down, we do have a proper soft spot for that kind of pop music and stuff like that, so when it came to it, we did kind of go, you know. I don’t want to say cheesy, I don’t want to undersell it or whatever, but we just went let’s just let it be what it should be. And that’s what it is, a record you know. I think we feel pretty privileged in a way that we could do that, that somehow we’ve built up a reputation for difference and different genres and stuff like that, so that can sit on an album next to Giant Peach and You’re a Germ and really kind of trashy, noisy kind of tunes.

Throughout the summer we’re going to be playing a mix of the album tracks and a handful of the old tunes. We’re kind of focusing this festival round on being up-tempo and loud and fast and ferocious, so it’s going to be our upbeat set.

Wolf Alice have been a new band for many years. It’s a strange concept but the band has evolved to new levels year on year. Where do your expectations or aims, as a band lie, in comparison to the early days of the band? Is album two already in your thoughts?

Me and Ellie started in 2010 and the other guys joined in a couple of years after that. We haven’t been allowed a lot of time really to look back to be honest. It has been, to use the old cliché, something of a whirlwind, fairly hard work, hard work in a good way but y’know you have your little moments every once in a while, I think we’ve still got our sights set pretty high, our expectations are, y’know, very very different to what they would have been maybe two years ago, when you were saying we were doing demos. And that’s the kind of sucky thing about expectations and motivation and all that stuff that, when you achieve something, the automatic thing is what’s next, trying to avoid just patting ourselves on the back and going well done, well done, we’ve done well.

It’s something we talked about as a thing years ago. We said, at the very very least, even if we have to make it ourselves, we want an album, that we can show our fucking grandkids and stuff like that, to show our grandkids and say we did it. So to come out with it is very very exciting.

For me at the moment its getting the live show and getting all these new tracks as good as they can be live, I want to get this so that when we start, when we’ve finished the festival circuit in the summer, I really want us to start honing down on our live show, and making sure that everything’s right there to begin the year or so touring cycle of that. And when that’s all up and running, I want to get a really early start on album two, I want to start it. It’s a hard one, cause you can never really know what you’re going to come up with, It’s kind of a bit of a mystery, I can’t really speak for where the next album’s going to go but I think we’ve talked about stuff but I think it’s probably too early. We’re a four piece rock band and I think where we’re best is in that kind of area. I don’t think we’ll be straying too much.

Have you had to adapt or makes changes to the live set up to accommodate the poppier material such as ‘Freazy’?

I don’t know about backing dancers but we’ve bought new equipment and stuff like that, but we are, essentially, a four piece rock band. I think that a lot of them, when we play live, they’ll be interpretations of the recorded songs, I doubt they’ll be us playing to a lot of recorded tracks like pop stars or mincing around keyboards.

We’ve discussed that Wolf Alice has evolved over a considerable amount of time. During that time, how much thought has there been towards the band outside of the music? Has aesthetic and attitude come into your thoughts and are there any particular influences or shared reference points?

I think if that kind of stuff’s too calculated I think it’s very showing. And people can pick up on that very quickly, I know what the guys always cite in that kind of aesthetic kind of thing. They always cite the horrors as being a band that kind of nailed that aesthetic and look and attitude around the music, and they’re a pretty special band for that.

Your tireless hard work probably leaves you dreading the thought, but do you think you’d know where you’d be right now without Wolf Alice?

I think we’d all still be trying to do it and trying to make it work, we’d all have to have jobs and stuff. Before Wolf Alice was full time I was doing supply teaching so I’d be doing that still and trying to take time off to write songs and stuff.

Any ticket requests from students?

I was primary and, er, special needs, so no, not really. 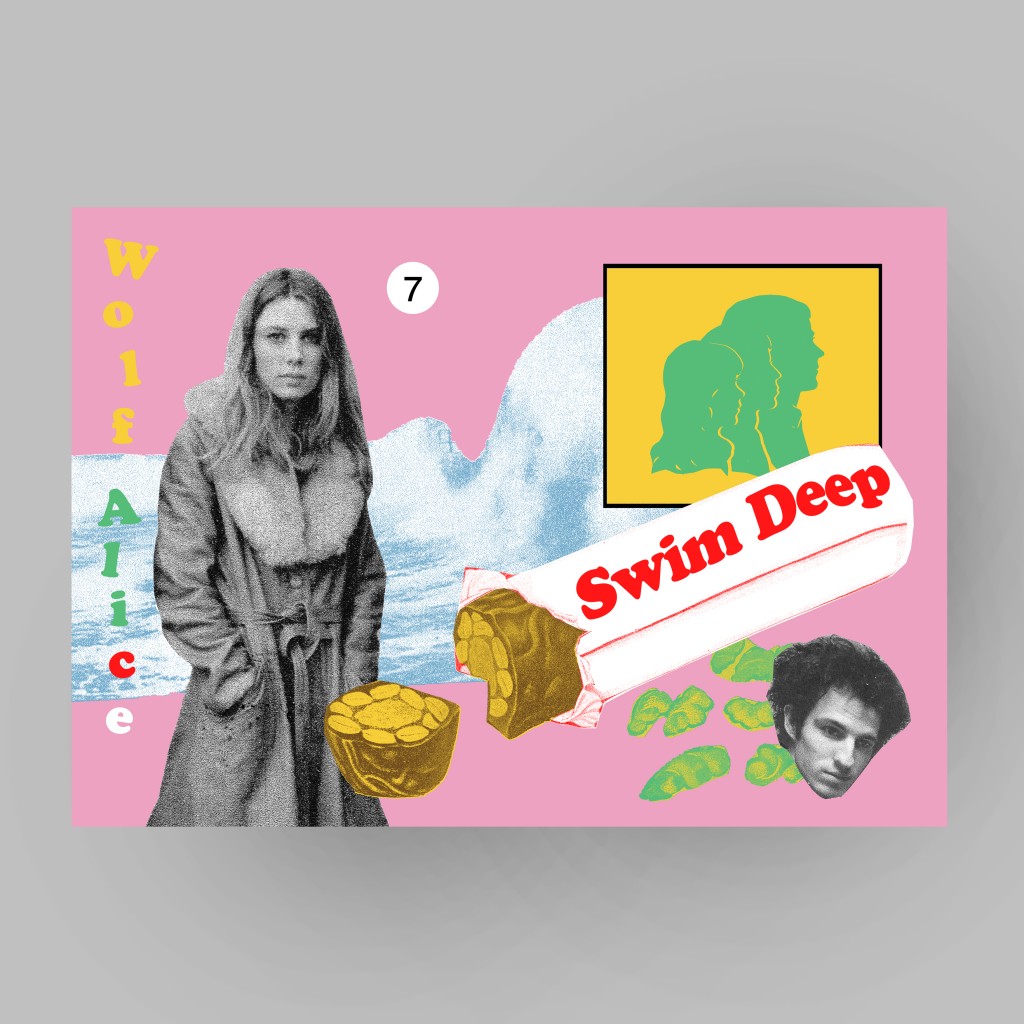 The Wolf Alice/Swim Deep A3 poster is now available from the shop for just £4!