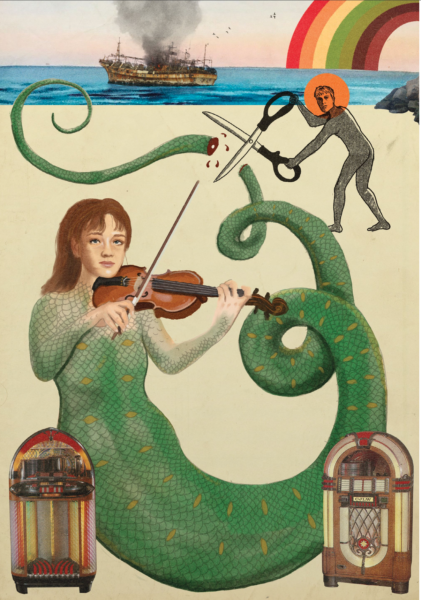 Jockstrap have just released their debut album, ‘I Love You Jennifer B’ via Rough Trade. Back in February, we spoke with the duo for their first interview in nearly two years. The interview feature below followed the release of single ’50/50′ and is taken from Issue Thirty-Six of So Young.

Recent Rough Trade signees, Jockstrap, are perhaps the only marked point in a venn diagram charting influence taken from Steve Reich and DJ Rashad. The collaboration between Guildhall graduated, fingers-in-several-musical-pies Georgia Ellery and Taylor Skye, their unique articulation of the creases between beat-driven rigidity and flowing, ethereal melody is endlessly captivating and increasingly diverse with each release.  There is a sense of fun and spontaneity to everything they do, but with a base level of casual genius pervading which allows them to transcend the realm of either dancefloor or moshpit, instead inhabiting some sacred amalgamation of the two.

It is the plight of live-electronic artists to walk the tightrope between ironica and joylessness, veering between saccharine mindlessness or navel gazing in its least attractive form. However, Jockstrap are one of the few to avoid falling down either side’s precipice. New single ‘50/50’, their first released on Rough Trade, is characteristic of this precarious balance. We find the band on their danciest form yet, with a broken, footwork-y wall of sound given respite by Ellery’s ‘Hollaback Girl’ infused vocal augmentations. On the strength of ‘50/50’ alone, it may be time to stop paying attention to any of their other projects, and start getting very excited about the forthcoming album.

We sat down with the duo “for [their] first interview in two years!” to discuss the processes and pitfalls leading up to their new album, taking their passions appropriately seriously, and the joys of building a personal artistic language.

‘50/50’ is great, and I feel shows a more concise focus on the more club-influenced, footwork-y side of your sound. Can you tell us a bit about the inspiration behind the track, and the process of its creation?

Taylor: I had my tonsils removed about six months ago and was just at home with my laptop making music. I made the first half of the song, the two different beat changes and then sent it over to Georgia. She liked it, and transformed it. We only made it a few months before it came out and didn’t even really talk about it, just banged it out.

Georgia: When Taylor sends a beat, it’s more or less complete and doesn’t change much – I then added some vocals. I wanted some vocals in a sort of Gwen Stefani vibe, so the vocal on 50/50 was inspired by trying to emulate ‘Hollaback Girl’ – I’m not sure if it sounds like it, but it’s got that whole chant-y thing, but the first half is quite dark before opening up at the end.

Where are you at with the album?

Georgia: Just working on a bunch of tracks at the moment, more tracks than we ever have in the past.

Taylor: We’re grinding right now. It’s been a grind for a while, but it’s moving forward.

In terms of your process more generally, the way it’s described sounds fairly seamless – do you both know a track is done at the same time?

Taylor: We’ve got enough tracks now that each one is quite different. That [50/50] was probably the side of things where it happens quickly, but most aren’t like that – a lot of them are a few years old now.

Something you’ve spoken about before is your interest in the meshing of ‘high’ and ‘low’ culture, irony and seriousness. What is it about these contrasting notions that so appeal?

Taylor: I don’t think we think about that at all. We both listen to Disclosure in a completely serious way, and don’t look back on that as a silly thing at all. We take everything we like really seriously, whether it’s more ‘fun’ or more ‘intellectual’ music. 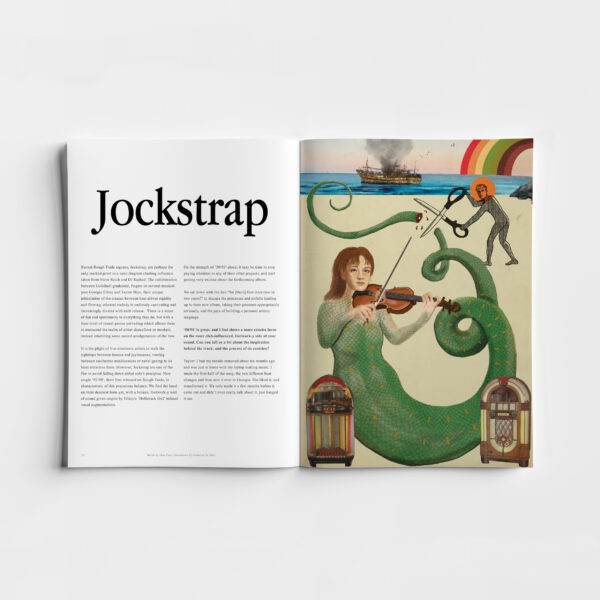 There does seem to be a real sense of looseness and experimentational freedom with each passing release – how important is it to keep that spontaneity, and keep from overintellectualising?

Georgia: We don’t think about that at all when making it, we’re just putting together things we like that may include something which makes us laugh. From there, we just work 100% to make it as good as possible, and aren’t really worrying about how it comes across.

Taylor: When we make music we’re always extremely serious, I don’t think it’s a joke – ever. Everything we release moves us in some way. There’s an air of seriousness, and so once that’s taken as assumed, we can be as silly as we want within that. There’s no switch between the serious and the other, because as long as that’s a baseline, there’s a spectrum to work within.

As Jockstrap, collaboration with other artists has featured heavily across your repertoire. Can we expect more of that on the album? You must have a few ‘dream’ features, who are maybe no longer just a pipe dream?

Taylor: We went on tour with Brother May, and he played with us at every show we did which was fun.

Georgia: He came on stage and freestyled over a couple of tunes. Taylor’s done a few remixes of unreleased songs, so he’d come onstage and perform with us. That felt really good, so it would be cool if we could take that further.

Taylor: To be honest, we’ve been working with ourselves mostly over the last little while. Jockstrap is already a collaboration, so I don’t suppose there’s too much need to alter that.

More personally, you’re both prolific with other projects. What does Jockstrap offer to you that maybe isn’t found in other areas?

Taylor: I think what I’ve started to realise is that because we’ve been doing it for quite a long time, there’s a bit of a grounding to this which we maybe don’t have in other places. In terms of the sounds, we can almost be a bit self-referential. I just really enjoy working with Georgia, that’s the main part – being with a brilliant musician who can come up with stuff I would never think of. I don’t do a lot of stuff with other people, so I really enjoy that. We both have an unspoken agreement around what we like, it’s one of those things you get when you get it.

Georgia: We’ve built up a repertoire of sound because we’ve been doing it for a while, which is great because you can reference yourself backwards and create a language – it’s not something I could have done, so it’s great to have Taylor. No one wants to talk about the pandemic, but it is interesting how much time it’s been, and wondering if we’d be working in the way we are if this period hadn’t elapsed.

Taylor: It’s an unusual situation to have been mulling over music for this long, but I think we’ve come to the logical conclusion, musically. We’ve got to where we were going to go, it was inevitable, but does time change anything? Or just make the path there weirder?

You’ve mentioned before a linking between releases, and ‘sister EPs’ and the like. In that scheme, where does the album fall in the Jockstrap universe? Does it stand alone, by virtue of its longer form?

Taylor: There’s all these melodies that Georgia is banging out, which are all connecting with other stuff, which I’m only realising as I listen to it back. I think this happens quite naturally for us, one thing just leads into another.

Georgia: There’s one melody taken from ‘The City’ which I played to my mum – she was like ‘you’ve literally just put this out, why would you do that, they’ve already heard it’ – but I wasn’t done with it, I like it too much. I don’t know if it’s something conscious, or something that just happened.

You mention not being done with a melody, which I feel hints at how personally connected you feel to what you create. Do you feel trepidation at releasing new music? Once it’s out in the world, I suppose it doesn’t only belong to you anymore.

Georgia: I think a lot of the songs we’ve already released have been so fucking personal. In some ways I’m used to that nervous feeling of putting something like that out into the world, it’s cathartic. It’s part of why you want to do it. I’ve never regretted anything that’s been lyrically exposing for me, because that’s so entwined with the purpose it was written in the first place – you have to stand by it. There might be a thrill to it, but it is scary!

Taylor: You can be vulnerable without being biographical, it depends on what makes you scared.

What’s your live set up looking like these days, and will that change with your new releases?

Taylor: We did a club night a few weeks ago and did a DJ set with Georgia singing over the tracks, which is something we’ve hardly done before and was very fun. When we’ve been on tour, it’s just been the two of us with equipment, but when we figure out these new songs it’s going to be different. We’re not quite there yet really.

Georgia: Performing live completes the lifecycle of the songs, and it’s really special to be able to play electronic music live. That still sort of baffles me, how we’ve merged the acoustic elements to our music with heavier beats. It takes a while to hone the ideas, and we haven’t yet unpacked all of that box of tricks.

The debut album from Jockstrap, ‘I Love You Jennifer B’ is out now. Find it here. This interview was taken from Issue Thirty-Six of So Young. Last copies available in print here.