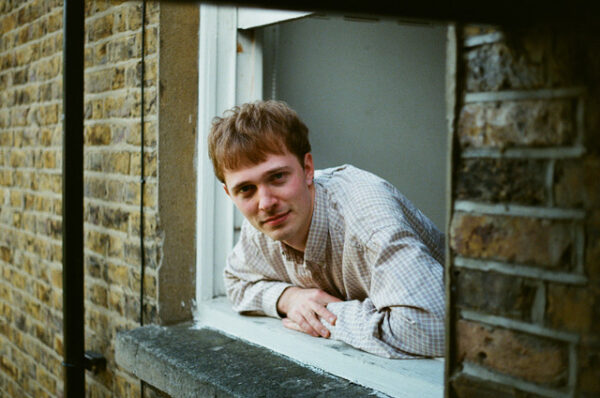 In combining wistful melodies with dreamy natural imagery, John Myrtle is creating his own world of sonic magic.

Having already gardened significant buzz with his rich dreamy sound – playing his psychedelic folk track Syril The Slug live on Marc Riley’s BBC Radio 6 show back in March – the singer/songwriter is sure to win over more and more fans with the release of his new E.P. Dropping on 26th July via both Sad Club and Bingo Records, Here’s John Myrtle is overflowing with soothing vocals and a certain idiosyncratic songwriting style that summons the spirit of 60s folk.

To wet our appetite in the meantime, the South Londoner has just dropped his new single, ‘The World Will Keep Spinning Round.’ A beautifully reassuring track complete with ethereal guitar work, the lyrics ponder the everyday anxieties and fears of life – namely heartbreak and lostness – through the guise of english nature, such as lush willow trees and foggy skies. Counteracting the darkness, the chirpy guitar and its bouncy rhythm lead the way towards the light, demonstrating the temporary state of self doubt as they move through a meditative bridge and finally culminate in some gorgeous melodies as soothing as a hot bath.

Whether you’ve had a shit day at the office or you simply want to lie in the park and stare at the birds for a while, turns this one up loud on your headphones and loose yourself in its sunshine soaked guitars. It’s the perfect antidote for a hard day of living.

You started out playing play bass in bands, what motivated you to step out on your own and write and record your own songs?

I played bass in bands when I was living elsewhere in the UK. When I first moved to London I didn’t really know anyone and spent a lot of time waiting around with the idea to form a band if I found the right people. I was just writing songs a lot on my own, getting better at playing the acoustic guitar, then after months of being frustrated my housemate suggested I do a solo thing. I’d always been a bit turned off by going it alone but I felt like I wasn’t going to get anywhere just sitting around. I was obsessed with Emitt Rhodes at that time as well, his DIY approach just changed what I thought was possible, so I got a hold of some recording equipment and set about trying to capture my sound.

Your music has a very dreamy late sixties vibe, from its songwriting style down to its production – what draws you to that particular period?

I’ve always been a huge Kinks fan. There was a Kinks cassette compilation lying around my house when I was small that I’d always play.  Songs like Apeman and Autumn Almanac had a big impact on me and I’ve always tried to capture that vibe in my writing. My method for writing songs is usually with an acoustic guitar, so I’m often listening out for interesting ideas to pinch and a lot of that stuff comes from the sixties.  I’m very much inspired by bands from the late eighties/early nineties as well – The La’s, Shack, and The Servants in particular. That’s the kind of sound I’m trying to capture just as much as anything from the sixties.

It seems that heavy guitar music is growing more and more in popularity, was there a part of you that wanted to rebel against that and make something softer and meditative? Or are you just naturally drawn to a more gentle style of songwriting?

I’d say that heavier guitar music often plays it safe nowadays which is quite ironic as its function should be to do the opposite. I like to hear good melodies in songs, which I find is lacking in a lot of that stuff. I wouldn’t say I’m intentionally rebelling against it, I’m just doing my own thing. I think raw, rhythmic pop songs are sparse at the moment and I want to be the one bringing it back. It’s been quite amusing playing shows with heavier bands on the same bill and then having us come on stage wielding acoustics and singing songs about slugs.

Your songs have a certain childlike innocence to them, especially, Cyril The Slug, which has a fairytale like narrative that could appeal to both children and adults alike. Is this something that you were conscious of when writing?

It’s not something I think about too much. I often like to write songs with stories in them that are simple and funny. Some of my favourite songs growing up are still some of my favourites today, things like The Laughing Gnome by David Bowie or Bungalow Bill by the Beatles. I wanted to keep that universal appeal in what I’m doing. I thought a funny concept for a track would be about a slug annoying someone by constantly ruining their garden – it didn’t need more of an edge for it to be good.

As a London based artist you’ve expressed real affection for your home, what is it about the city that captures your heart in particular?

I like that there is always something going on here in London, something round the corner. It’s unpredictable which has made my writing unpredictable. At first it seems alienating but it soon sweeps you in. It’s great.