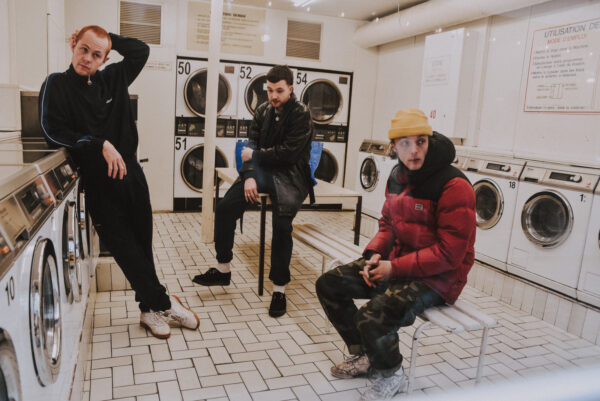 Lorenzo Ottone chats to Lady Bird about the historical link between punk and hip hop, finding new inspirations and growing up in Kent.

Lorenzo Ottone:  In ‘Got Lucky’ you enhance your trademark punk with a faster rap phrasing. What brought you to evolve and embrace this direction?

Joe: Skepta and Stormzy’s first albums both really excited us while we were getting to know each other, and we’ve always wanted to draw on this influence. I think there’s a really natural parallel in the energy of punk and grime.

We wrote ‘Got Lucky’ a year and a half ago when Sam had just got his voice back. It was the first time Alex and I wrote just the two of us. When Sam heard us jamming to the riff he went: “You two turn that into a tune, I’m gonna write some grime bars.” He came back an hour later with all the vocals done and we stitched it all together.

It’s an emerging genre we’re really excited about. Our mates Para Fiction have been introducing us to other artists like Kid Bookie and Pengshui. I recently saw them with Goat Society. It seems like Slow Thai is just the tip of the iceberg in something bigger going on. We’re blessed to be making music at a time when people are ready for blending genres.

You hail from Kent, a county that not only gave birth to unique scenes in the past, but that’s also home to Slaves and other new exciting indie and punk bands. Is there something special about the place or is it its lack of general excitement that pushes youth to embrace music as a form of escapism?

Sam: Good question. I guess it’s down to a combination of people’s individual circumstances, coupled with the fact that there are lots of people living there from different backgrounds. I suppose the development of social activities within the youth of an area creates the effect of music and other art forms. The mothership of our local scene is The Tunbridge Wells Forum, it’s through this platform that people from other areas of the country, or the world, have heard of bands like us and Slaves.

In tracks like ‘Spoons’ you capture realistic and vivid snapshots of everyday life England. How do you feel about the country at the moment, especially as young musicians facing Brexit first and now the prospect of further hard times for live music?

Joe: No great change ever came out of being comfortable. You’ve got to decide to make the most out of difficult times in order to turn struggle into something valuable. Human beings need to grow, so I want to look at these conditions as the muddy water for the lotus to blossom in. It’s the same for musicians as it is for all people who want to see a positive change in society. Gotta keep striving, gotta keep believing.

Despite punk is often traditionally associated with violence and distinctively manly behaviours, the UK has been witnessing a new punk scene that has reignited interest for the genre and has also challenged many of its stereotypes with bands like Slaves and Idles.

Do you feel part of a broader scene? Is there still space for subcultures in 2020?

Joe: When we were about to release our first single, at the start of 2018, my prayer was that we would become a part of a scene of great bands making music with a clear determination for creating value in society. That scene definitely exists now and I’m very proud to be part of it. There’s definitely still space for scenes and subcultures, but I think what’s cool now is that it’s not about any kind of sound or creed, it’s just young people trying to do something good with their art and being more focused on that than their egos.

Sam: We meet lots of young bands who are absolutely setting up new sounds and sub genres, which I believe are equipped with all the tools to bring music back in to the fore. They can overshadow the overwhelming saturation that comes with constant information and misinformation to scroll through.

Do you think you’re giving voice to your generation?

Sam: It can be hard to work out what is really going on in the hearts of people who are in a particular group or movement, and what people’s intentions actually were during historical eras like the ‘77 punk scene. Multimedia usually scoops up some of those themes and they seem to outlive the stories of those ‘who were really there’ as such.

The hip hop and B-Boy scene for example, which was going on at the same time as the original punk movement, was subjected to lots speculation surrounding its ethos and moral structure. In its essence, it was a movement of artistic expression responding to political injustice, which was the same for the heart of the punk scene too.

What should we expect from your upcoming EP dropping in May?

Sam: This EP is a journey. Our sound has evolved naturally with a new level of conviction, and yet holds all of the same characteristics. It is set amidst the dialogue of one’s mind, the gateway between the five senses and your thoughts and, as usual, holds a stream of social commentary.

Lady Bird’s new single ‘Got Lucky’ is out on all digital platforms on Friday, March 20th via Girl Fight Records.