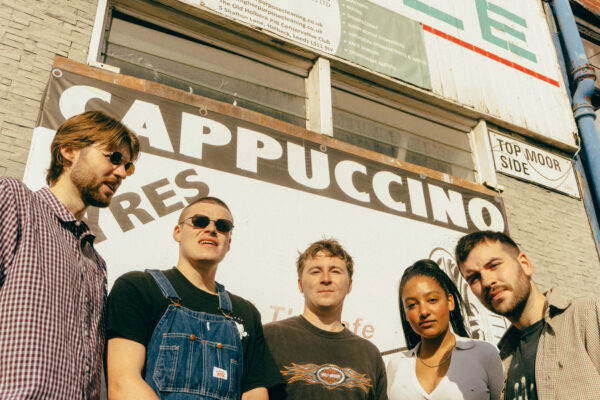 Moving on from their joyous April EP ‘Abstract Education’, Leeds quintet Eades release their new single ‘Reno’ via Heist or Hit. It’s once again a swaggering affair, but don’t be fooled: there’s a bit of impressive situational songwriting just below the surface.

Is there any sound more exciting than two drum sticks hitting one another four times? Eades raise the suspicion there isn’t. From the get-go, ‘Reno’ is a vital anthem full of team spirit and bravado. There’s brilliant lyrics emphasised by the fact that they’re bellowed out in unison, there’s an angular left turn reminiscent of Parquet Courts at two thirds of the song and even – it is 2021 in Great Britain after all – a bit of Sprechgesang to lead into one final chorus to conquer them all.

It would, then, be easy to remain completely oblivious to the dark story at heart of this jubilant track. To do so, however, would do Eades a terrible disservice, because ‘Reno’ tells quite the gripping tale about a man “shot down in Reno” (a nod to Johnny Cash’s ‘Folsom Prison Blues’) who gets so disillusioned with his own 9 to 5 reality that he needs to light a fire just to feel something for once. Luckily for us, we’ve got Eades to keep our fire burning.