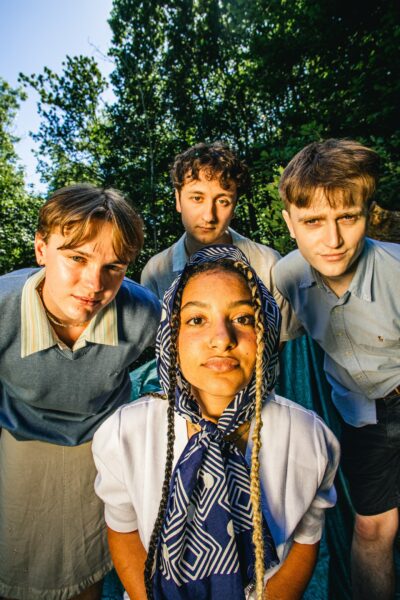 With an abundance of tracks about societal qualms already out there, why would you prick up your ears to yet another? Well English Teacher have a knack for taking the issue at hand and re-imagining it to make it more palatable, pulling on literary references or a hefty slice of personification to deliver their message to the masses. ‘Wallace’ is no exception, a laconic and clever commentary which flows in the same vein as previous releases such as ‘The World’s Biggest Paving Slab’ or ‘You Won’t Believe How Beautiful She Is When It Has Snowed’ to certify English Teacher as a band with a clear penchant for word play and turning a metaphorical phrase or two.

English Teacher explain their latest single: “‘Wallace’ is an apocalyptic monologue about what happens when people listen to Wallace Hartley, the band-leader of the Titanic, as a distraction to the sinking of the ship. Born in my hometown, his name is stretched across the door of our local Wetherspoons – thinking about the irony of this got me wrapped up in how the metaphor perfectly expressed my feelings towards the political leanings of the area and the general rise of the right-wing in modern England.”

It opens to the rich and inimitable vocals of Lily Fontaine who possesses a sublime tone capable of flipping from a whisper to guttural force in the blink of an eye. Produced by Theo Verney (TRAAMS, FEET, Lazarus Kane) ‘Wallace’ has a deep, full-bellied sound that is frankly an odyssey as a mesh of almost grungy distorted guitar, resonant drums and subtle experimental electronic sound build before being cannily severed by the poignant and startlingly unexpected strings of ‘Nearer My God to Thee’. The track ends as subtly as it began with eerie piano notes echoing like a lone ship on a radar; a brutal and brilliant example of why the band have earned a decent amount of praise and visibility so far this year.

With a string of live dates including a slot on Sports Team’s annual Margate Bus Trip brooding, English Teacher are all set to cause a stir in the newly revived realm of live music as well.

The new issue of So Young is out now and we speak to English Teacher inside. You can grab your copy in print from the shop or read the digital edition below.